A Saudi teenager who said she was abused by her family has arrived in Canada, where she has been granted asylum. The woman had barricaded herself in a hotel in Thailand fearing she would be deported back to Saudi Arabia. 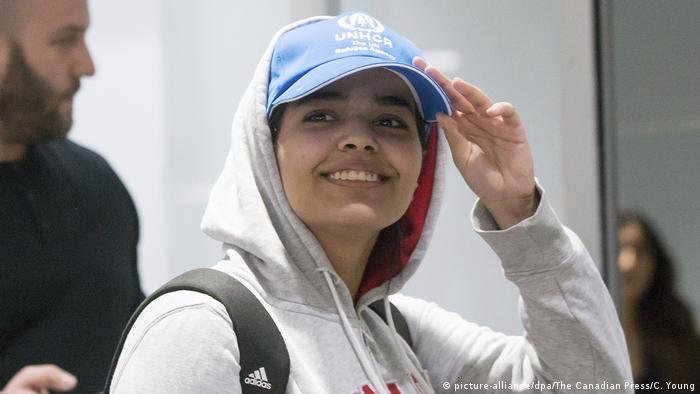 Rahaf Mohammed Alqunun, an 18-year-old Saudi woman who said she was abused by her family and feared deportation back home, arrived in Toronto, Canada, from Thailand on Saturday and was greeted by Canadian officials, including Foreign Minister Chrystia Freeland.

Her arrival at Toronto's Pearson International Airport capped off a tumultuous week for Alqunun that involved her barricading herself in a hotel room at a Bangkok airport to avoid deportation back to Saudi Arabia.

With Freeland at her side, Alqunun emerged briefly at the airport's arrivals hall wearing a United Nations High Commissioner for Refugees (UNHCR) cap and a hooded sweatshirt with "Canada" on the front. Freeland introduced her to a group of media as "a very brave new Canadian."

"It was a pleasure for me this morning to welcome her to her new home," Freeland said. "She is obviously very tired after a long journey and she preferred to go and get settled. But it was Rahaf's choice to come out and say hello to Canadians. She wanted Canadians to see that she's here, that she's well and that she's very happy to be in her new home." 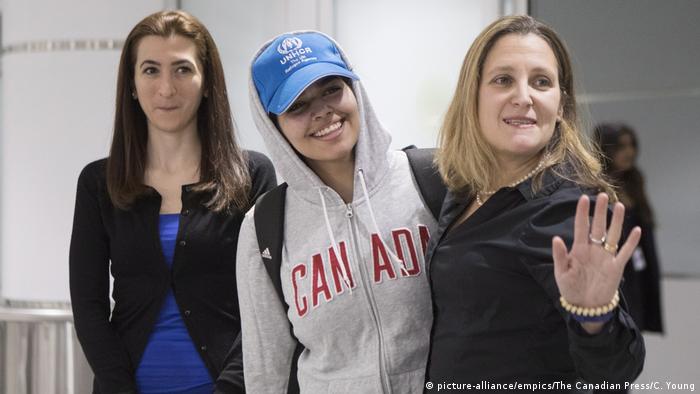 Prime Minister Justin Trudeau said on Friday that Canada would grant Alqunun asylum after she spent the past week in Thailand avoiding deportation.

A Saudi diplomat seized her passport last Saturday in Bangkok as she was about to board a flight to Australia while trying to flee from her family. Human Rights Watch said Alqunun had been detained in the flight transit zone at Bangkok's Suvarnabhumi Airport on January 5 while en route from Kuwait to Australia, where she had intended to apply for asylum.

Her story gained international attention after she posted a series of tweets from a hotel room at the airport asking for asylum and help. She said she feared her life was in danger if she had to return to her family in Saudi Arabia, where she said she would be forced into a marriage. She also said she had been beaten, that her male relatives had threatened to kill her and that she was once kept in her room for six months for cutting her hair.

The UNHCR gave Alqunun protection in Thailand as they evaluated her asylum case. On Tuesday, her father arrived in Bangkok in an attempt to bring her back to Kuwait, but she refused to see him.

Several countries, including Australia, had been in talks with the UNHCR to accept Alqunun's asylum claim before she chose to go to Canada, which the refugee agency said was a "personal decision."

Several women have been forced to return to Saudi Arabia in recent years, human right activists say, adding that many similar cases had gone unreported.

Strict Saudi social rules typically require women to have permission from a male "guardian" to travel.

Canada's acceptance of Alqunun is likely to further upset its relations with the Saudi rulers.

In August, Riyadh expelled Canada's ambassador and withdrew its own envoy from Canada after Canada's Foreign Ministry tweeted support for women's rights activists arrested in the kingdom.

Saudi 18-year-old Rahaf Mohammed Alqunun has received a wave of international solidarity in her bid for asylum. Will her struggle for human rights help to enact change within the Gulf dictatorship? (10.01.2019)

A young Saudi woman was locked up by her family for half a year for refusing a forced marriage. She finally managed to escape to Thailand. Her case has made a splash on social media — but she's not the only one. (07.01.2019)