Saudi minister: ′We don′t have a history of murdering our citizens′ | World| Breaking news and perspectives from around the globe | DW | 18.02.2020

While Riyadh insists the killing was a rogue operation, The Washington Post, Khashoggi's former employer, reported in November 2018 that CIA officials were confident the crown prince himself lay behind the assassination, citing unnamed sources.

In an exclusive interview at the Munich Security Conference, the Saudi Minister of State for Foreign Affairs told Conflict Zone host Tim Sebastian, "The idea that this was authorized is ridiculous."

Adel al-Jubeir, who was demoted from foreign minister in a government reshuffle following the killing, also rejected that there had been a crackdown on dissidents and lauded the country's attractiveness to foreign business.

"If Saudi Arabia was so bad nobody would come," he said.

On Khashoggi's murder, Sebastian asked why Turkish investigators were allowed to enter the Saudi consulate in Istanbul only 10 days after the crown prince made the offer for them to search it.

"I understand that there are situations where countries have to agree on the mechanics and the modalities of how you want people to enter sovereign territory," al-Jubeir said.

"No country will allow another country full access to a diplomatic facility, that just doesn't happen."

The UN Special Rapporteur on extrajudicial, summary or arbitrary executions, Agnes Callamard, reported in July 2019 that there was "credible evidence pointing to the crime scenes having been thoroughly, even forensically, cleaned. These indicate that the Saudi investigation was not conducted in good faith, and that it may amount to obstructing justice."

The state minister told Sebastian that the special rapporteur had "relied on sources from the newspapers and on leaks to the media" and was biased.

"Look at her record when it comes to Saudi Arabia for a number of years," said al-Jubeir, "and how disparaging and how negative she has been against Saudi Arabia."

Al-Jubeir also pushed back at Sebastian's challenge that there were many others besides Ms Callamard who were disparaging about human rights in Saudi Arabia.

"Saudi Arabia’s made great progress in terms of human rights," he said.

On the wrong side of human rights?

But human rights organizations, such as Amnesty International, see it differently.

"Virtually all Saudi Arabian human rights defenders and independent voices, male and female, are behind bars serving lengthy sentences," it said in a report this month. 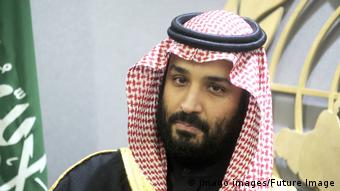 Crown Prince Mohammed bin Salman "is the driving force behind change in Saudi Arabia," said al-Jubeir, but questions linger around his connection to Jamal Khashoggi's murder

"I take issue with that. The country is on a major path to reform and anybody who calls for reform is part of that process," al-Jubeir said. "Why would we have reforms in Saudi Arabia and then criticize people who call for reform?"

The minister of state said Saudi Arabia faced "hypocrisy" over the criticism levelled at it over human rights.

At a meeting in January with al-Jubeir, members of the European Parliament were also critical of Saudi Arabia’s human rights record.

"You have one of the worst records in the world, and if we are to treat you as an ally and a friend, then that has to change," one British MEP told the Saudi official.

On Conflict Zone, Tim Sebastian raised the meeting with al-Jubeir and his response to MEPs that Riyadh "refuses to be patronized."

"Saudi Arabia does not accept people criticizing our legal system. We have not criticized the UK or France or Germany or Sweden," the minister of state said.

In March 2019, 36 countries, including Germany, France, and the UK, issued a joint statement saying they were "particularly concerned about the use of the counter-terrorism law and other national security provisions against individuals peacefully exercising their rights and freedoms."

Sebastian asked if Saudi Arabia had been badly misunderstood by experts.

Al-Jubeir agreed. "They need to be more educated," he said.

The Saudi foreign minister has told a German news agency that the current export ban went against "the good relations" between the countries. Yet he also warned that Saudi Arabia is far from dependent on German arms. (17.02.2020)