Saudi Arabia's de facto leader has explicitly acknowledged Israel's right to its own homeland, a first for a senior official from the kingdom. However, he also made a bizarre comparison between Hitler and Iran's leader. 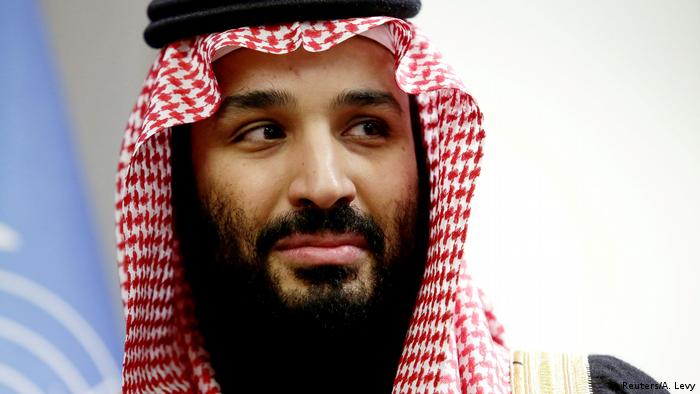 Israel has a "right" to a homeland alongside the Palestinians, Saudi Arabia's influential crown prince, Mohammed bin Salman, said on Monday in an interview with US magazine The Atlantic.

Asked whether the "Jewish people have a right to a nation-state in at least part of their ancestral homeland," bin Salman said: "I believe the Palestinians and the Israelis have the right to have their own land."

Riyadh has sponsored an initiative supporting a two-state solution to the Israeli-Palestinian conflict since 2002, but Salman is the first senior official to explicitly acknowledge Israel's right to any territory in the region.

The 32-year-old prince, who is widely seen as Saudi Arabia's de facto leader and a reformer, added that "we have to have a peace agreement [between Palestinians and Israelis] to assure the stability for everyone."

Read more: The crown prince and the generation gap

The German Israeli Society welcomed what it described as the "very reasonable position" taken by the Crown Prince. "Israel would, of course, have a strong partner on its side with Saudi Arabia, if indeed this is the overall political view and not only that of the Crown Prince," society president Hellmut Königshaus told Germany's Deutschlandfunk radio station. However, Königshaus added a note of caution. "He is just one person, and Saudi society has still not come that far."

Warming up to each other

Saudi Arabia does not officially recognize Israel and has said any normalization of relations requires Israel to withdraw its claim to Palestinian territory seized during the 1967 Arab-Israeli war.

But the crown prince's acknowledgment marks the latest sign that diplomatic ties between Riyadh and Tel Aviv are growing closer amid their common opposition to regional rival Iran.

Saudi Arabia opened its airspace in March for the first time to a commercial flight to Israel and in November an Israeli Cabinet member confirmed speculation of back-channel communication between the two countries when he admitted that he had secret contacts in Riyadh.

Read more: Israel caught between the fronts of Saudi Arabia's conflict with Iran

Speaking with The Atlantic, bin Salman said he had no "religious objection" to Israelis and Palestinians living together in any permanent settlement.

But any settlement with Israel would, he added, need to ensure protection for the main Islamic holy site in Jerusalem, the Al-Aqsa mosque.

The crown prince, who is in line to succeed his 82-year-old father, King Salman, said: "This is what we have. We don't have any objection against any other people."

'Hitler of the Middle East'

"Hitler tried to conquer Europe. This is bad," said bin Salman. He added: "The supreme leader is trying to conquer the world. He believes he owns the world. They are both evil guys. He is the Hitler of the Middle East."