Authorities arrested 10 people and seized weapons and explosives. Riyadh said three of those held had been trained to make explosives, while the other seven had ties to the Iranian Revolutionary Guards. 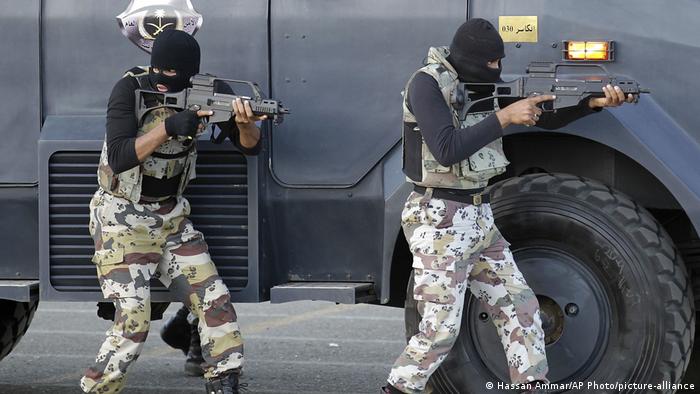 Saudi Arabia on Monday said it broke up a terrorist cell that had received training from Iran's Revolutionary Guards, arresting 10 people and seizing weapons and explosives.

The arrests were made last week after a probe uncovered the suspects' identities and two hideouts: a house and a farm, according to a statement made by the Presidency of State Security, a Saudi intelligence body.

The spokesman for the Presidency of State Security said in a statement that three of those arrested had been trained in Iran and had received "military and field training including on how to make explosives" between October and December 2017 at sites linked to the Revolutionary Guards in Iran.

The other seven suspects were linked to the group in different roles, according to the statement, which was carried by the official Saudi Press Agency.

Saudi Arabia did not reveal the identities of those arrested "for the interest of the investigation" as authorities seek to gather more information about their activities and connections both within and outside of the kingdom.

Saudi Arabia and Iran are embroiled in several proxy wars in the region, including in Yemen. Riyadh has blamed Iran for an unprecedented missile and drone attack on the kingdom's oil facilities last year — an accusation that Iran denies.

Germany: Angela Merkel's party to decide her successor in January 2h ago

Coronavirus: Merkel promises to shore up German economy 3h ago