Satire in the museum: Comedian Jan Böhmermann puts on exhibition

His poem about president Erdogan, which led to diplomatic tensions between Turkey and Germany, made him world famous: Satirist Jan Böhmermann revisits the year 2017 in a new exhibition in Düsseldorf, "Deuscthland." 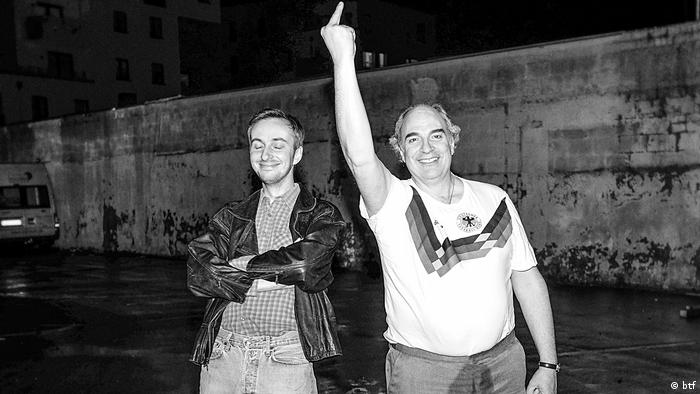 Security checks are in place at the NRW-Forum venue in Düsseldorf, where Jan Böhmermann's work is on show. The exhibition "DEUSCTHLAND" (Germany,  deliberately misspelled) apparently poses a risk, and even journalists invited to visit the show ahead of the opening are required to line up — women to the right, men to the left — and go through a body-search. Passport check at the exhibition

These checks themselves could almost be a part of Böhmermann's exhibition; they also reflect just how much dynamite is packed in the Böhmermann brand.

Special security measures have been necessary to protect the satirist and TV show host since March 2016, when he recited a poem on national television which implied that Turkish President Recep Tayyip Erdogan was involved in intimate relations with goats, watched child pornography and hit young girls. It caused a massive fall-out between Turkey and Germany, with Erdogan suing Böhmermann and the comedian nearly being indicted under German law.

Böhmermann not at the opening

The media storm that ensued surely gave reason for Böhmermann to distance himself from journalists. The 36-year-old seldom gives interviews, and he did not attend the opening of his exhibition in Düsseldorf. 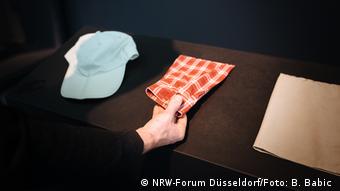 Those who actually make it through the initial security checks will be confronted with another one where they must show their passports. German citizens receive a pink sticker; foreigners receive a yellow. They are obvious references to Germany's history and the Holocaust, and an indication of the direction Böhmermann's review of 2017 will be taking.

His exhibition tackles Germany's past and present, as well as populism and nationalism and how the country's history should be dealt with. The comedian also pokes fun at German Chancellor Angela Merkel, including her hiking outfit in the show.

What can still shock us?

Böhmermann uses everyday objects to create incisive installations. In his "Hetztkeks-Automat" (Hate Cookie Machine), viewers can put in a euro, and out pops a cookie wrapped in gold foil which contains a slip of paper with a hate tweet printed on it. It might say something like "You are too stupid to even shit in a toilet." The cookie machine emphasizes just how much hate comments on the internet have become part of everyday life.

Still, the works on show do not manage to truly surprise viewers or prompt fresh reflections. 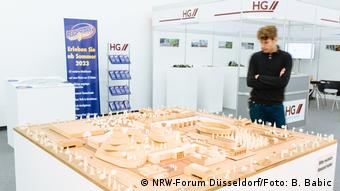 An 'amusement park' through Germany's Nazi past

The most striking work in Böhmermann's collection is the "Reichspark," a miniature model of an amusement park devoted to National Socialism. A six-minute virtual reality tour through Hitler's bunker, the battle of Stalingrad, and a decimated Dresden scathingly parodies the glorification of National Socialism by neo-Nazis. It also warns against forgetting the past.

With satiric finesse, the work prompts us to wonder: What can still shock us in the age of Trump, Brexit and the far-right Alternative for Germany party in German parliament?

"A work such as 'Reichspark' certainly contains a lot of potential for provocation," said Alain Bieber, artistic and managing director of Düsseldorf's NRW-Forum. However, it is not about deliberately provoking people or creating a scandal. It is more about asking the right questions at the right time, he said.

The exhibition is not a revolution, but definitely is satire. Bieber certainly believes that what Böhermann and his team have on show is art. "People can debate about whether it is good or bad art," he added. 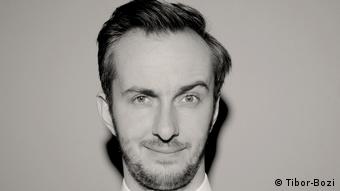 The exhibition is a satirical review of the past year, exploring today's circumstances, grievances and absurdities. Nothing more, nothing less. But one thing is clear: in his television programs and podcasts, Böhmermann is able to convey central topics of our times to a wide audience. Only time will tell whether he's successful at it in a museum setting. It will also depend on whether people make it through the security checks. Just remember: women to the right, men to the left.

The exhibition "DEUSCTHLAND" runs through February 4, 2018 at the NRW-Forum in Düsseldorf.

German comedian Jan Böhmermann appeared on US national TV, striking a chord with late night show host Seth Meyers. Böhmermann disclosed some of his personal experiences being sued by the Turkish president. (26.04.2017)

German satirist Jan Böhmermann has threatened legal action against Merkel if she doesn't take back her statement on Böhmermann's poem about Turkish President Erdogan. Merkel had called it "purposefully offensive." (06.09.2017)

Germany's parliament has voted to scrap its law protecting heads of state and governments from insults. The decision comes after Turkish President Recep Tayyip Erdogan tried to indict a prominent German satirist. (02.06.2017)