Pilots from Scandinavian Airlines have gone on strike following a breakdown in wage talks. Hundreds of flights have been canceled, with more than 150,000 travelers expected to be affected over the weekend. 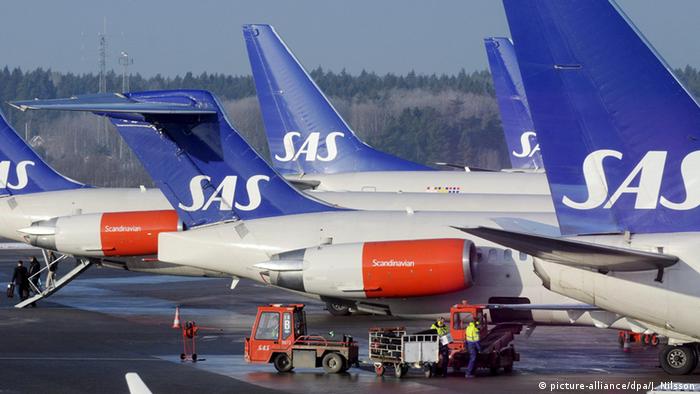 Scandinavian Airlines (SAS) pilots in Norway, Sweden and Denmark walked off the job on Friday after wage talks ended without an agreement.

The strike has led to the cancellation of domestic, European and long haul flights, affecting thousands of passengers.

The pilot unions had been in wage negotiations in the three Scandinavian countries since March. Earlier this month, they called for 1,500 SAS pilots to go on strike on Friday if no breakthrough was reached.

"The two sides were too far apart, and there was no reason to believe that a compromise could be reached," the office of the National Mediator of Norway said in a statement cited by Reuters as it announced the breakdown of the Norwegian talks on Friday.

Talks also collapsed in Denmark and Sweden, despite external mediators being brought in for the final stages.

SAS said it was still willing to bargain and hoped to reach an agreement as soon as possible.

"SAS is prepared to continue to negotiate, but if the requirements were to be met, they would have very negative consequences for the company," an SAS statement said. "Nonetheless, the pilot associations have chosen conflict."

The airline has canceled about 70% of its flights, affecting over 72,000 passengers on Friday. It said thousands more could be impacted over the weekend.

The strike is not affecting SAS Ireland or airlines that are subcontractors of SAS, the carrier said.

Ryanair has become the first noncoal company to join Europe’s top 10 carbon emitters. The Irish airliner is "the new coal," one expert said. (03.04.2019)

Scandinavian carrier SAS has signed a provisional order for new Airbus planes with a list price of several billion euros. The struggling airline hopes to improve its long-haul operations and return to profitability. (25.06.2013)

Strike by pilots in Sweden leaves thousands of passengers stranded

Several hundred pilots in Sweden have gone on strike over wage disputes and working conditions. Dozens of flights have been cancelled, affecting thousands of passengers across Sweden and Europe. (11.06.2016)