Scandinavian airline SAS has canceled a further 1,213 flights for Monday and Tuesday after pilots began their strike on Friday. Mediators say there are no signs of fresh negotiations and differences remains wide. 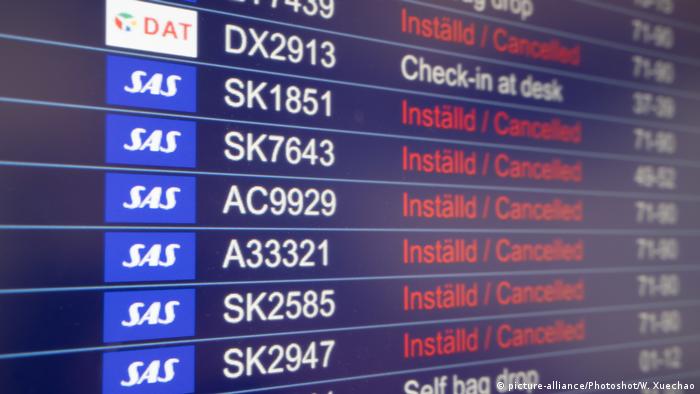 SAS, the joint flag carrier of Denmark, Sweden and Norway, said a further 110,000 passengers would be affected by the cancellations on Monday and Tuesday after a pilot strike left 170,000 travelers stranded on the weekend.

"We deeply regret that our customers are affected," said the airline.

Disrupted are Nordic, European and long-haul flights. Unaffected are about 30 percent of flights operated by SAS subcontractors or partners.

Unions representing some 1,500 striking pilots say they want compensation for wage cuts and other concessions made in 2012, when SAS nearly collapsed, as well as more predictable working hours with less fatigue.

The Swedish Confederation of Transport Enterprises puts the wage increases demanded by pilots at 13 percent, labeling it "excessive."

Mediators said big differences existed when talks broke down on Friday. On Sunday, both SAS, Swedish and Danish unions and Norway's NHO employers association said no renewed contacts had been made.

SAS, part-owned by Sweden and Denmark, warned that agreeing to the pilots' demands would seriously damage the airline's recovery prospects.

"SAS must show a real willingness to discuss and meet around the negotiating table," said Rawaz Nermany, president of the Swedish Air Line Pilots Association, which initiated the strike.

The Danish lender Sydbank on Friday predicted that the strike was likely to cost SAS 60 to 80 million Danish kronor (€8-11 million, $9-12 million) per day.