Sans Forgetica, the new font that helps your memory

Students studying for exams have a new tool at their disposal — typography. A font developed by designers and researchers helps you remember what you just read. 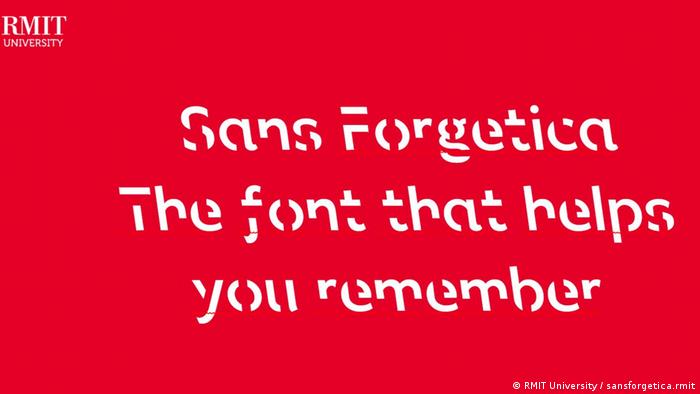 Australian researchers have created a font that aids memory recall, a Melbourne university announced this week.

The font Sans Forgetica was developed by a trio of designers and researchers specializing in typography and behavioral science at RMIT University in Melbourne.

The design is based on a font called Albion, but with heavy modifications to reduce familiarity. The font is back-slanted and includes distinctive gaps that engage the brain, improving recall.

"Readers often glance over them and no memory trace is created," said Blijlevens. But she warned that if a font is too outlandish the brain struggles to process the text and the information is not retained.

"Sans Forgetica lies at a sweet spot where just enough obstruction has been added to create that memory retention."

The modifications force readers to spend longer on each word, allowing the brain to engage in deeper cognitive processing.

In an online experiment, 303 students took a mock multiple-choice exam. When the text was presented in Sans Forgetica, participants remembered 57 percent of the text, compared to 50 percent of the surrounding text that was written in a plain Arial font.

The World of Letters

The World of Letters

Why Bauhaus will never go out of style

An exhibition in Bonn explores what makes the legendary Bauhaus school of design so timeless. These architects and artists came up with a revolutionary idea that is now taken for granted: Everything is design. (04.04.2016)

From Velcro to high-speed trains: 5 examples of technology inspired by nature

What do wasps have to do with brain surgery? What can architecture learn from termites? We look at five examples of technology that found their designs in nature. (08.06.2018)

US officials investigating potential 'bribery for pardon' scheme 2h ago