Typographer Erik Spiekermann is part of a new group that aims to find a universal logo for human rights. DW spoke with the prizewinning German designer about public messages, crowdsourcing - and the value of fonts. 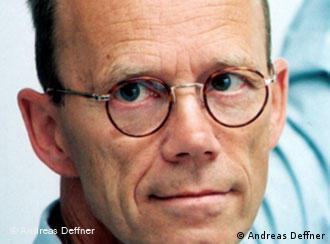 'My fonts will not necessarily be your fonts,' says this self-proclaimed typomaniac

Typographer, graphic designer and author Erik Spiekermann won a Lifetime Achievement Award from the German Design Council in 2011. He has designed the type for numerous public institutions, including the German railway, Deutsche Bahn, as well as the signage for the Berlin subway system and airports. He is the managing partner and creative director of the Berlin design agency edenspiekermann, and teaches design at the University of the Arts in Bremen.

Deutsche Welle spoke with Erik Spiekermann about the project humanrightslogo.net, which is undertaking a search - via Internet - for an internationally recognized logo for human rights.

Deutsche Welle: Were you behind the idea of finding a logo for human rights?

Erik Spiekermann: No, it was thought up by someone at the foreign office here in Berlin. It's a "crowdsourcing" project, which normally I frown upon. That's 'c-r-o-w-d'-sourcing and not 'k-r-a-u-t'-sourcing by the way. Here in Germany you could make that mistake...

It's something [my studio] doesn't normally partake in when it's done for commercial purposes. These days it is something companies do who want to save money. They farm their stuff out to everybody, designers and non-designers, and say, "You get 200 euros if you design us a logo." Then they get 20,000 submissions and 19,992 of them are crap.

But this is different. It's basically trying to create a movement, which is a nice idea so I took part in it. We're saying, "This is something that concerns everybody." We can't give it to a couple of professional design agencies - the world may not accept it, since it comes from above. So if we get something designed by a schoolchild in Nigeria - or New Jersey, for that matter - it would be nice. 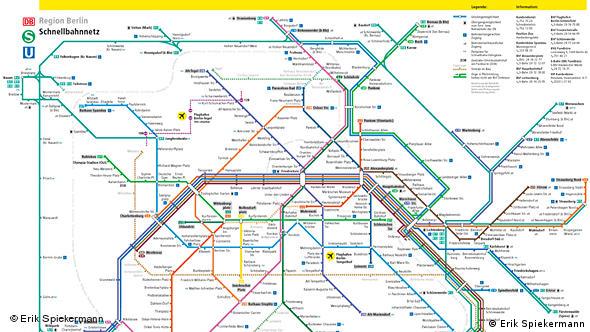 A famous design whose author hopes to stay out of the picture: the Berlin subway map, by Spiekermann

So do you give the "crowd" good odds for finding a design solution?

Actually, not at all. It's a fallacy to think the crowd will be better at something than a professional. But the point here is less the result than the process. We're chucking a stone in the water and hoping it will create waves. The outcome is fairly unimportant - it's probably going to be bland.

If you were to design this, what would it look like?

You have to have something that everyone in the world can understand. It can't be very specific; it can't be technical; it can't be overdesigned because it has to work across cultures and religions. It's got to be some sort of symbol or sign. If this were my job I would just encourage people to use light blue. It's the house color of the United Nations - they wear those blue helmets.

We've had this thing recently - the orange movement in Ukraine, the red movement in Thailand. Movements are being described by colors these days, because everybody can wear a T-shirt or put a handkerchief around their head, and they are already part of a movement.

[In this campaign] we're not against something. The [human rights] sign says simply that we are for each other. The whole human rights ideal is that I accept you as a human. I grant you the same rights as I grant myself. So I hope the discussion gets away from talking about a technical logo.

What do you think makes a symbol successful?

As soon as a symbol is appropriated, then it's successful. It doesn't matter if it's a three-sided star or a dot or an ink blot. But appropriation is not something a government can decree. It has to be a common agreement. We on the jury might pick something that we think looks cool and that works in print, and can be reproduced in three colors, or what have you. But there is no guarantee that the people somewhere, between here and Indonesia, will pick this and will make it theirs.

For example - we've recently seen more of the 'Atomic Energy? No thanks!' symbol here in Germany. From a design point of view it's horrendously horrible; very amateurish. It got designed by some guys in Denmark, but it got picked up. It's the circumstances that make something successful. You can have a really ugly logo, but it can get picked up because it's the right thing at the right time.

Let's talk typography, which of course is your claim to fame. Many people in Germany see your fonts every day - for example tied to Deutsche Bahn or the Berlin subway system. How does that feel?

Its gratifying, but the work I do is by definition apocryphal. It's done by somebody, but nobody is supposed to know it. Typography is the famous crystal goblet - you drink the wine, you don't think about the glass. I can make things a little bit warmer or colder, or squarer or rounder, but I am a servant to the words. If people ask, "Who did this cool sign?" then I'm doing something wrong. By definition, I am very happy being unknown to the general public.

But lettering and typefaces do impart a feeling - a taste of an era. I see fonts that are reminiscent of the 1970s, for example, or of Germany in the 1930s.

That's the whole point. But its not in the foreground, it's in the background. I like to say, typography is like air - you only talk about it when it's bad. It's taken for granted, but we would certainly miss it if it wasn't there. 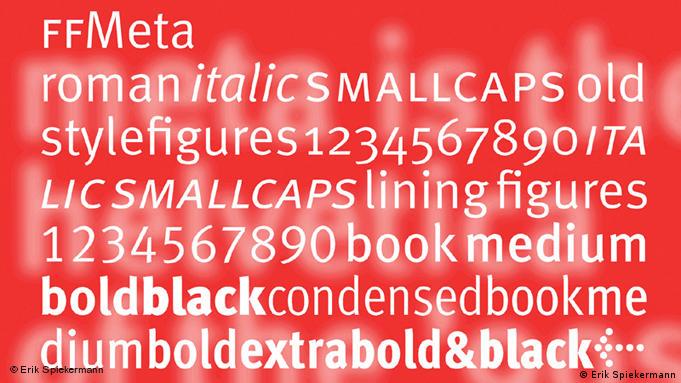 Since naming his first typeface 'meta,' all of Spiekermann's fonts have been four-letter words

Do you think our relationship to type is changing because we all work on computer screens these days, and can change fonts at whim?

Yes, defnititely. People are more aware of fonts than they were 20 or 30 years ago. Back then, people didn't necessarily know there were different fonts. Nowadays, everyone who pulls down a drop-down menu knows that there is more than one typeface, and that God didn't make them - people did.

In the 1970s, I used to tell people I design typefaces and the response was head-scratching. They'd say: "Huh? Aren't they all there?" Like they grew on trees and we just picked them.

I must say I myself was wondering about how many more typefaces could ever be devised. I mean - haven't they all been used up by now?

How many songs are written every day? How many paintings are painted, how many photographs are taken? You and I don't need them - we don't need 200,000 songs, or 200,000 typefaces. I have six or seven ties in my closet, but I would never buy a tie from a store that only sold six or seven ties. I would want the choice out of 200.

But - excuse me if I'm being obtuse - with a song, there are infinite possibilities. With fonts there are still just those 26 letters- How many variations can there be?

It's the same as with music … I have half a dozen recordings of Beethoven's 5th, but I can tell those recordings apart. One is a full three minutes shorter than the others - that's Karajan for you. And they have other subtleties. Yet I enjoy all of them. So why shouldn't we have them? Technically we don't need them, but they give us pleasure.

What's in a logo? Everything - and preferably as little as possible

The power of logos is immense - just ask the folks at Nike, Apple or Coca-Cola. Now, a search is underway for a universal logo for human rights. But just how easy is it to find a concept that clicks? (10.05.2011)

Letterpress printers are an island of tradition in modern Berlin

Germany is the birthplace of the modern printing press and, even today, Berlin is home to a number of letterpress printers. DW's Gerhard Schneibel found out why printed books hold a magic he'll never find on a screen. (27.08.2010)

Red Dot Awards highlight the best of designs of 2010

Household objects like electric screwdrivers or driers aren't sold just because they work, but also because they look good. The annual Red Dot Awards honor the best in everyday design. Here are some of the winners. (08.07.2010)