An international team of artists succeeded in building a sandcastle that is almost a meter higher than the previous record holder. The triumph came two years after a similar attempt to break the record ended in tragedy. A team of artists finished work on a 17.66 meter (57.94 feet) sandcastle on Wednesday in the German resort of Binz on the Baltic Sea island of Rügen, breaking the previous world record for the highest sandcastle of 16.68 meters.

The artists began work on the castle in May with the help of a digger and crane and used more than 11 tons of sand.

They first constructed a cone of sand that measured 27 meters at its base before sculpting the castle's final structure.

The group included artists from the Netherlands, Russia, Hungary, Latvia and Poland.

The successful construction marked a turnabout in fortune for organizer Thomas van den Dungen. His first attempt at breaking the world record collapsed two years ago shortly before the castle was finished.

Tourists will be able to see the castle, which is part of a local sand sculpture exhibition, until November 3.

Germany was also the site of the previous record holder, which was built in the western city of Duisburg in 2017. 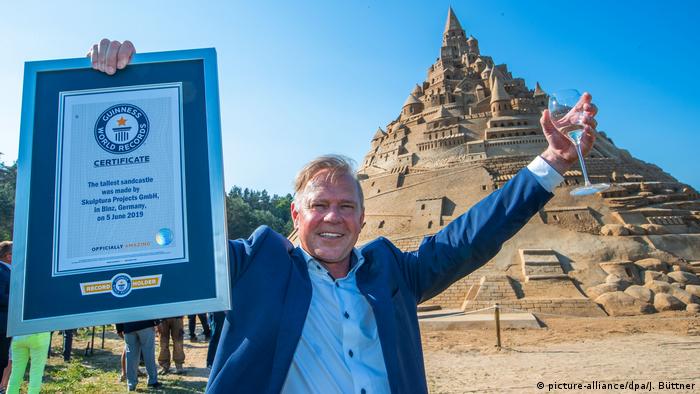 Black American wins US spelling bee, the largest sandcastle ever made, bee feeders spread seeds of hope, New York pandemic heroes celebrated, and the feats of a child prodigy.

The world's most peaceful country is revealed, a Chinese monk saves man's best friend, Greek police track down stolen artwork, and a baby beats the odds to survive.

Despite aiming to complete their project in 10 years, the Brothers Grimm died a century before the final volume of their work was published in 1961.