"What happened here will never happen again," said President Paul Kagame. The country will mark the deaths of 800,000 people with a candlelight vigil in a stadium that once sheltered victims. 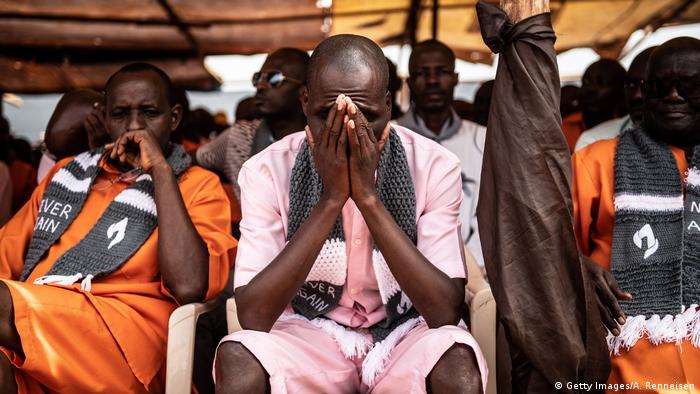 Thousands of Rwandans, as well as President Paul Kagame and First Lady Jeannette Kagame, marked the 25th anniversary of the country's 1994 genocide in a somber ceremony on Sunday.

The Kagames laid wreaths at a mass burial ground where 250,000 victims have been laid to rest.

"In 1994, there was no hope, only darkness. Today, light radiates from this place ... How did it happen? Rwanda became a family once again," Kagame said.

The president added that "our people have carried an immense weight with little or no complaint. This has made us better and more united than ever before."

Later on Sunday, Kagame led a candlelight vigil in Kigali's National Stadium, where 25 years ago many Tutsis sought shelter from the violence under the protection of UN troops.

European Commission President Jean-Claude Juncker and the leaders of Chad, the Republic of the Congo, Djibouti, Niger, Belgium, Canada, Ethiopia and the African Union also took part in the commemorations.

"I am moved beyond words at this memorial to tragedy," Juncker said. "Time can never erase the darkest hours in our history. It is our duty to remember."

On April 6, 1994, a plane carrying President Juvenal Habyarimana, an ethnic Hutu, was shot down. Ethnic Tutsis were blamed for the killing, causing bands of extremists to begin slaughtering Tutsis, supported by the army, police, and militias. The violence lasted for 100 days and left 800,000 people dead.

Kagame has ruled Rwanda since the end of the genocide. He has helped steer the country through economic recovery, but has been accused of rights abuses as well as failing to lead a national reconciliation about the violence. Many of the killers remain free and many families were never able to locate their relatives' remains.

President Kagame has also publicly accused the 1994 Hutu-led government of shooting down his predecessor's plane, and has said the French government, which had soldiers stationed in Rwanda, turned a blind eye.

On Friday, French President Emmanuel Macron ordered an investigation into whether his country's government played a role in the genocide, and declared his intention to make April 7 a national day of remembrance.