It was one of the worst genocides of modern history. Twenty-five years ago, a 100-day campaign of ethnic cleansing turned Rwanda into a vast execution ground. How has this affected the country's youth? 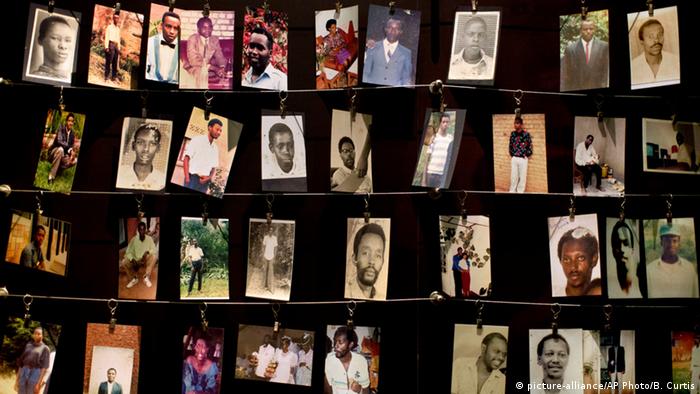 This weekend, Rwandans are marking the 25th anniversary of the genocide in which one-tenth of the country's population was killed in Africa's largest massacre.

Beginning on April 7, 1994, extremist Hutus killed 800,000 of the Tutsi minority, and fellow Hutus who refused to participate or chose to protect their Tutsi neighbors. Now Tutsis and Hutus, survivors and perpetrators of the genocide, are coming together to reflect on a crime that rocked a nation once known to be a place where all ethnic groups lived together in harmony.

Prior to the anniversary, young Rwandans born after the genocide gathered at the genocide memorial site in the capital, Kigali, to rehearse songs for the commemoration. One is about the flame of hope that will be lit at the site. The young people came to learn more about the history of the genocide and the process of reconciliation.

Among them was Uwihirwe Yassipi Casimir, the first runner-up in the Miss Rwanda 2019 competition. She told DW that the genocide and the country's history had shaped her life. "Though we were not there during those times, it's our responsibility to take part and comfort those who were there," she said. "They're our parents, our relatives, our family. They're our neighbors and friends. And we are the next generation to teach the history we didn't live in."

Anipha Lucky Umufite, also among those who gathered at the memorial, said Rwandans strove for unity after the events of 1994. "We are no longer divided among Hutus and Tutsi. We are all Rwandans. I have learned here at the memorial site that there's been a significant change in the last 25 years." David Shyaka Habukubaho, 25, was only two months old when the killings started. His father was killed in the first days of the genocide; Habukubaho and his mother survived, thanks to a Hutu neighbor who hid them from the militias.

Habukubaho is proud of his country. "Rwandans have come a long way in a very short time," he said. "One of the things that attracts many people and blows our minds is seeing Rwanda rising from the ashes and phenomenally rebuilding itself."

A united Rwanda, where Hutus and Tutsis live in peace, where the economy flourishes and the streets are clean — that is how President Paul Kagame wants Rwanda to be seen by the outside world.

Most Rwandan adolescents say they want to put the dark part of the country's history behind them and build a new Rwanda where all ethnic groups can live together. However, many feel they can't talk comfortably about the country's history. They fear they could be labeled as not wanting to be part of Kagame's "new Rwanda."

Phil Clark, a political scientist at SOAS University of London, told DW this is something the younger generation has learned from its elders. "They've watched very carefully how older Rwandans have measured their words, especially in terms of national politics," he said. "People talk about Hutu and Tutsi, there's no fear in the country about that kind of open discussion."

Instead, the main issue the government controls is the explicit discussion of ethnicity in the context of political mobilization. "There is undoubtedly a wariness when talking about ethnicity in political terms and about openly criticizing national political leaders," Clark said. He believes the government has effectively suppressed discussion of crimes committed by the Rwanda Patriotic Front (RPF), the current ruling party and former rebel group headed by Kagame. "So it's true that it's very difficult in Rwanda for people to talk about RPF crimes."

In a country where husbands killed their wives and where neighbors killed neighbors, reconciliation has not been easy. Not all Rwandans think true reconciliation has been achieved, despite a survey by the National Unity and Reconciliation Commission that showed that 95% of them believe Rwandans have reconciled with their past. But questions remain as to the accuracy of these findings, and whether they could be influenced by the so-called "culture of silence"?

Fidele Ndayisaba, head of the National Unity and Reconciliation Commission, believes there are three main challenges for reconciliation. "One, some people still harbor the genocide ideology, that is a problem that still exists," he said. "Secondly, there are still some people who identify themselves and others according to the ethnic group they belong to. Thirdly, and importantly, there are those who carry the scars of the genocide and the bad history that we went through."

But according to Clark, Rwanda's development has been remarkable despite those challenges. "It is inevitable, when survivors and perpetrators see each other in the streets and in village courtyards, there is wariness, there is a sense of unease," he said.

"But what we've seen in Rwanda over the last 25 years is a range of processes designed for people to try to directly grapple with the genocide and its legacies. Much of Rwanda, of course, is still heavily traumatized and very uneasy in many ways. But this is not manifesting in serious ethnic tensions."

Clark does not believe that a culture of silence exists. "In fact, this is a country that has almost had too much discussion of the genocide in the last 20 years," he said. He believes that one of the key criticisms is that many people got tired of having to keep dealing with the genocide and its aftermath.

"Every single week for 10 years, every village in Rwanda held court hearings where there was constant discussion about how the genocide had happened in that community, who was responsible, who needed to be punished and what kind of sentence needed to be handed down," he said. "And then you have the annual commemoration period when there is constant discussion of the genocide. Some Rwandans perhaps find they are forced to talk about the genocide too much, and find that discussion ultimately quite exhausting and sometimes even traumatizing."

"There are no restrictions to this topic," said Allan Muhizi, a student from Kigali. He talks about the genocide with friends and family, and keeps learning from history. "You get to know different perspectives, but in the end, no one says 'I am Hutu' or 'I am Tutsi.' We are all Rwandans."

A Rwandan court has dismissed all charges against opposition figure Diane Rwigara. This shows an independence of the judiciary, says political scientist Phil Clark. (06.12.2018)