Russia′s Communists gain momentum in run-up to elections | Europe | News and current affairs from around the continent | DW | 07.11.2011

With Russia's December parliamentary elections approaching, many discontent voters are turning to the Communist Party in their search for an alternative to Prime Minister Putin's conservative United Russia. 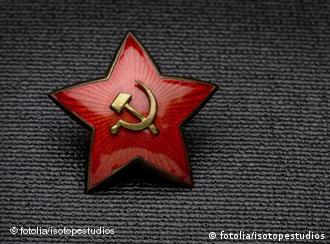 The Communists are the only serious opposition in Russia

Gennady Zyuganov appears with a clenched fist and resolute face on a campaign poster for his Communist Party. In the background, industrial complexes can be seen and next to them stands the slogan: "We will make sure to give back what has been stolen!" That is the campaign platform with which Russia's Communists hope to score political points in the parliamentary elections on December 4.

In their campaign program, the Communists call for a "new union of brother nations," a bid to resurrect the "stolen homeland." In addition, they want to "give the people their stolen wealth back." Entire branches of the economy should be nationalized again, they say. The Communists also want to return to Soviet social policies - they are promising free education and health care, among other services.

The Communist Party of the Russian Federation (CPRF) was founded in 1990 by members of the Communist Party of the Soviet Union (CPSU) who opposed Soviet leader Mikhail Gorbachev's reforms. After the attempted coup in August 1991 against Gorbachev, Russian President Boris Yeltsin banned both Communist parties. In 1993, Russia's Communist Party was re-established and until 2003 they represented the biggest force in the Duma. Since then, the Russian parliament has been dominated by parties affiliated with Vladimir Putin's leadership in the Kremlin.

The Communists' promises are resonating with Russian voters. According to opinion polls, the CPRF could win as much as 17 percent of the vote, a five point improvement over their showing in 2007. That would make the party the second largest force in the Duma. Alexei Grazhdankin, who works for independent pollster Levada, sees several reasons for the popularity of the Communists.

"The general mood in the country is not as optimistic as it was during the last Duma elections in late 2007," Grazhdankin told Deutsche Welle. 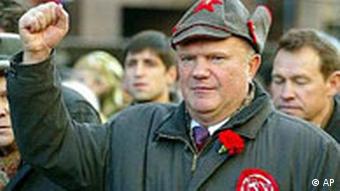 Zyuganov says the Communists have adapted to the post-Soviet era

The economic crisis had an impact on Russia too. Opposition parties, not just the Communists, have gained momentum, he said. In addition, fewer parties are participating in the December elections.

"The Agrarian Party, which has a similar base as the Communists, is not in the running," Grazhdankin said. The party's voters are likely to support the Communists.

A growing number of voters plan to cast their ballots for the Communists as a form of protest against Putin's incumbent United Russia. For years the CPRF has been the only real opposition party in the Russian parliament. Other parties, like the right-wing and populist Liberal Democrats, maintain their loyalty to the Kremlin.

The Communists core base of supporters can be seen every year on November 7, the anniversary of the October Revolution. It's mostly pensioners who take to the streets with red flags.

The party's base will actually shrink over time since those who look back on the Soviet era with nostalgia die out, Grazhdankin said. Yet the party is attracting more followers for now.

"Every year more people go into retirement, and for most Russians that means social decline," he explained.

Many Russians who grew up in the Soviet Union view the communist era as having been more socially just than the present. Russia's current Communists are convinced that socialism is not dead. They see their criticism of capitalism confirmed by the current economic crisis and want to learn from nations like China. 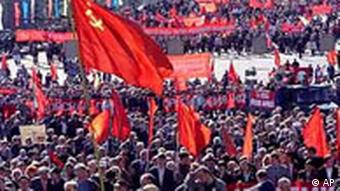 On the other hand, party chief Zyuganov gave reassurances during a recent trip to Berlin that the Communists have adapted to the realities of the 21st century.

"I don't believe that there's any reason to fear us," he said. "There won't be any expropriation of property. We live in a different era."

The Communists integrated themselves into post-Soviet Russia long ago. Wealthy business people appear on the party's ticket, and they are driven more by commercial interests than ideological ones. So Zyuganov can clench his fist all he wants on campaign posters.

"The Communists would have major difficulties implementing their campaign promises," Grazhdankin said.

Russia's finance minister has resigned after a clash with President Dmitry Medvedev. Kudrin had opposed several government spending policies and made a short-lived stand against the Kremlin. (27.09.2011)

US and Germany vow to continue progress with Putin's Russia

If Russian Prime Minister Vladimir Putin re-takes the country's presidency in 2012, as expected, governments in Washington and Berlin have promised to maintain a good working relationship with the new administration. (25.09.2011)

To the West's dismay, Erdogan returned to Turkey from Sochi with pledges of new ties and some modest economic concessions. Could Putin prove a true friend in tough times?