Russian warship 'Moskva' has sunk — What do we know?

Ukrainian forces claim to have taken out Russia's Black Sea flagship "Moskva" with a missile strike, while Russian officials say a fire on board had caused ammunition to start exploding. Here is what we know so far. 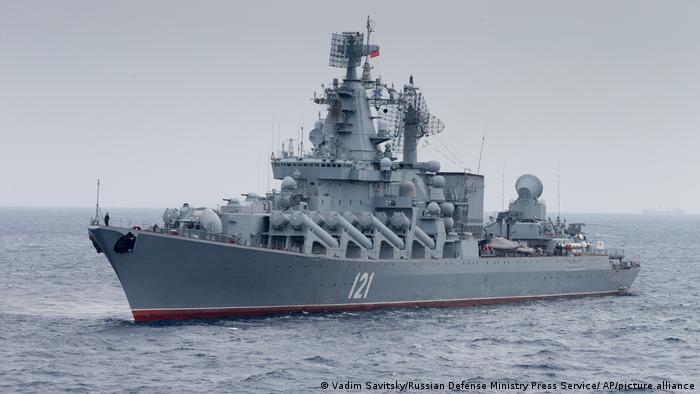 The pride of Russia's navy, missile cruiser "Moskva," has sunk while being towed into port, Russian officials confirmed.

The loss of the cruiser named after the Russian capital is a significant blow to Russia's naval prestige and greatly reduces its navy's firepower in the Black Sea. But Ukraine and Russia have offered different accounts on what happened with the Russian warship.

What does Ukraine say happened to 'Moskva'?

According to Ukrainian officials, its military targeted "Moskva" with Turkish-made Bayraktar drones to take out the ship's radar system, and followed it up with a missile strike.

The ship was allegedly hit with two "Neptune" cruise missiles. The missiles, which were developed by Ukrainians and entered service in August 2020, have a range of around 300 kilometers (186 miles) and can carry warheads of up 150 kilograms (over 330 pounds).

Destroying "Moskva" with a missile strike is a major psychological boost for the Ukrainians, as the ship was previously involved in a standoff with Ukrainian soldiers on Snake Island which became the symbol of Ukraine's defiance in the opening days of the war.

Russia's Defense Ministry spoke of a "fire" which detonated ammunition aboard the Soviet-era vessel. The cause of the fire, according to the ministry, is still being investigated. They did not mention a Ukrainian attack.

"The ship has suffered serious damage," they said in a statement, adding that the ship's 500+ crew has been "fully evacuated."

Russian officials said that the fire onboard has been localized and the ammunition was no longer exploding. They also said the navy would tow the flagship vessel into port. Vladimir Putin's spokesman Dmitry Peskov said the Russian president had been informed about the incident.

Later on Thursday, however, Russian defense ministry confirmed that the ship had sunk while being towed in "stormy conditions" due to hull damage sustained during the fire.

What is Washington's take?

Pentagon spokesman John Kirby told CNN that both narratives — a fire on board and a Ukrainian missile strike — were "possible." Other sources indicate cloud cover made satellite imaging ineffective at the time of the incident.

Later, news agencies cited a senior US official as saying a blaze was detected when the vessel was 60 to 65 nautical miles (111-120 kilometers, 69-75 miles) south of Odesa. It was now moving to the Crimean port of Sevastopol.

The ship was allegedly heading towards Sevastopol

"Our assessment is that she still appears to be battling a fire on board" hours later, the official added.

Also, despite Russia saying all crew members had been evacuated and the vessel would be towed, the US believed the ship was still moving under its own power.

What do we know about 'Moskva'?

"Moskva" was the flagship of Russia's Black Sea fleet. It is a 186-meters (612 feet), 11,500-ton cruiser first launched in 1979 from a shipyard in Ukraine, which was then a Soviet republic. The ship is armed with 16 Vulcan anti-ship cruise missiles with a range of at least 700 km (440 miles). It is also equipped with a version of an S-300 anti-aircraft system.

In 2015, the ship led Russia's naval force in the Mediterranean Sea during the military campaign in Syria. In 2018, it was taken into dock for scheduled repairs and returned to service in September 2020.

Last year, Russia's former top navy commander Viktor Kravchenko described it as a "the most serious ship in the Black Sea."