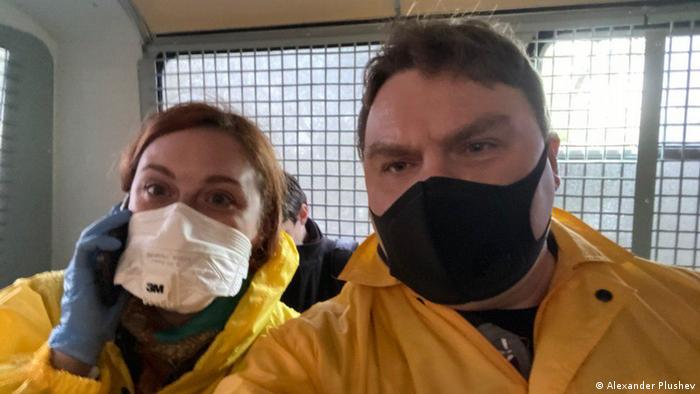 Police in the Russian capital carried out a second day of mass arrests on Friday at demonstrations held to protest against the jailing of journalist Ilya Azar. At least 20 people were detained as they were staging single pickets — the only form of protest allowed without the authorities' permission — just a stone's throw away from the Kremlin.

Among those detained were Alexander Plushchev and Tatyana Felgenhauer, both journalists at the radio station "Echo of Moscow." Plushchev is also a guest columnist with Deutsche Welle's Russian-language service. 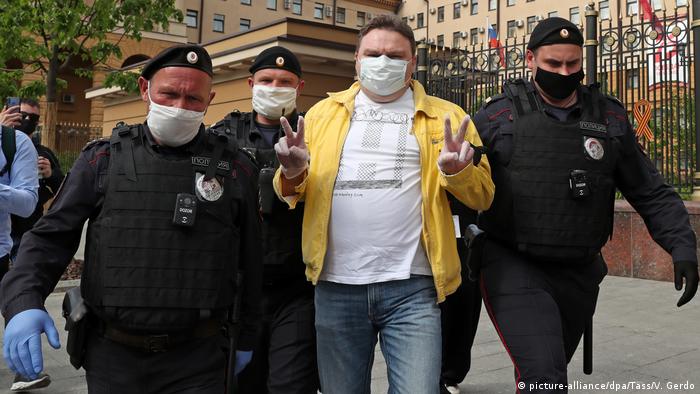 Plushchev was also taken into custody and released on Thursday

Journalists detained for the second time

This is the second time the journalists have been arrested since Thursday, when they spent a few hours at a police station before being released late in the evening. On Friday, neither journalist participated in the protests and both had their press cards with them, which they showed to the police officers. Plushchev and Felgenhauer were detained all the same after they were unable to comply with a police demand to present confirmation of their editorial assignment. They were taken to the police station along with some protesters and finally released two hours later.

Earlier in the day, Moscow authorities also arrested Sergei Mitrokhin, a deputy in the city parliament, and Yulia Galyamina, a municipal district councilor. Four protesters were also detained in St. Petersburg during similar protests, according to the website of the human rights project OVD-Info.

Friday's arrests are part of the crackdown by Moscow authorities on those protesting against the arrest of Ilya Azar, a 35-year-old councilor and journalist at the award-winning independent newspaper Novaya Gazeta. Earlier this week, he was sentenced to 15 days in prison for repeatedly violating the protest law.

On Thursday, police detained eight prominent journalists who were staging single pickets in the city center to support Azar. Some of them were later released. Multiple international organizations condemned the arrests. Some of them said the authorities were using the COVID-19 pandemic to muzzle activists.

Azar, who is also a municipal deputy in Moscow's Khamovniki district, was detained on May 26 for staging a single-picket protest against the arrest of Vladimir Vorontsov, a former police officer and founder of a Telegram channel exposing abuses in Russia's law enforcement system. Vorontsov was arrested in Moscow in early May on extortion charges.