Two military pilots have died after their helicopter crashed near the central Syrian city of Homs early on Tuesday. The accident takes Russia's official combat death toll to seven. 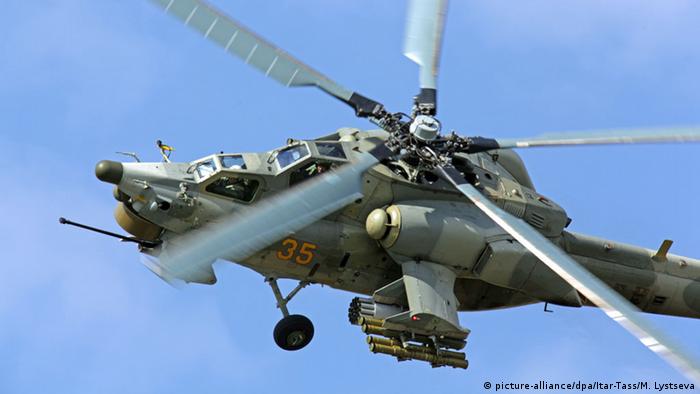 Russia's Defense Ministry said the aircraft, a Mi-28N Night Hunter attack helicopter, had not been under fire at the time of the crash.

"According to a report from the crash site, the helicopter was not fired at," the ministry added, saying experts were looking into the reasons for the accident.

The Interfax news agency cited an undisclosed source in the military as saying that the pilots were wearing night-vision goggles and flying in complete darkness over little-known terrain.

"There could have been some kind of obstacle on the flight path that the helicopter crashed into," the source was quoted as saying.

Officials said the bodies of the pilots have been recovered and taken to the Hemeimeem air base on Syria's coast.

The crash happened less than a month after Moscow surprised the West by ordering the bulk of Russian forces to pull out of Syria after a five-and-half-month bombing campaign. Around half its fixed-wing strike aircraft flew out in the days that followed.

But Russia has continued to ship significant quantities of military supplies to Syria and analysts said the Kremlin had changed rather than diluted its military capabilities, increasingly relying on helicopters to support the Syrian army.

Mi-28N helicopters took part in a Syrian government operation to push the "Islamic State" (IS) militant group out of the ancient city of Palmyra last month.

In another incident, a special operations officer was killed when he called an airstrike on himself after being surrounded by IS fighters near Palmyra.

Another serviceman committed suicide while on duty in Syria, Russia's Defense Ministry said.

The crash is also the third aircraft Russia has acknowledged losing in Syria. A helicopter sent to rescue the pilots shot down by the Turkish military was destroyed by rebels after landing.