Russian officers on trial in Kyiv after Donbass arrest | Europe | News and current affairs from around the continent | DW | 10.11.2015

Russian officers on trial in Kyiv after Donbass arrest

For the first time, two Russian officers accused of fighting for separatists are on trial in Ukraine. Kyiv is hoping to prove Russia’s military presence in the country's east. Moscow has distanced itself from the men. 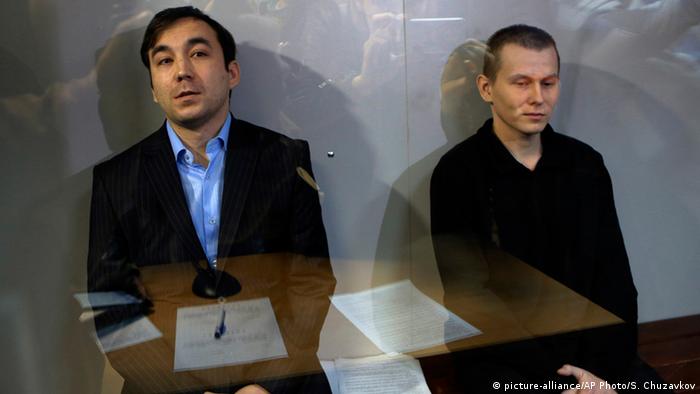 The man behind the glass wall was clean-shaven, and wearing a pinstripe suit. He appeared to be confident, in a good mood. When a reporter asked him what he did in Ukraine, he smiled and said, "I just walked around."

That was early November at the Holosiyvsky district court in Kyiv. Many Ukrainians remember the man differently: with a full beard, lying on a hospital bed with an injured right arm, weak and depressed. His name is Yevgeni Yerofeyev (left in picture). About six months ago, the 30-year-old Russian was captured by the military during a battle with separatists in eastern Ukraine.

In a hearing, Yerofeyev claimed to be the captain of a special unit from the southern Russian city of Tolyatti. Now he says he was coerced into making that statement. The trial against him and 28-year-old officer Alexander Alexandrov (right in picture), captured at the same time, began in Kyiv on Tuesday. Alexandrov also claims to have been pressured into giving a confession.

That must sound surprising to Viktor Nikolyuk. The Ukrainian colonel personally arrested both Russians on May 16 near the village of Shastya, on the border of the separatist region of Luhansk. Nikolyuk told DW that fighting broke out during a routine inspection, killing a Ukrainian soldier. He said he found the two Russians lying wounded in some bushes. Alexandrov reportedly identified himself and Yerofeyev as officers of Russia's third special forces brigade, and asked for assistance.

Yerofeyev and Alexandrov were brought back to Kyiv, where they received medical treatment. Now, they are defendants in court, accused of terrorism and taking part in a war of aggression against Ukraine. If convicted, the two men face long prison terms - and potentially even life sentences.

A few days before the start of the trial, they filed applications to receive prisoner-of-war status. Alexandrov's lawyer referred to the 1949 Geneva Convention. "Prisoners of war can, as a rule, not be called before a court," the lawyer said after a hearing.

German international law expert Gerd Hankel disagrees. "Since there is no war between Russia and Ukraine, they cannot be deemed prisoners of war in the traditional sense," said Hankel, of Hamburg's Institute for Social Research. He said Yerofeyev and Alexandrov would fall under the protection of an addendum to the Geneva Convention, which regulates cases such as a rebellion or opposition to a central power. Prisoners in such conflicts have to be treated humanely, but a trial against them is permissible, Hankel said.

This case is hugely important for Ukraine. For the first time since the start of the country's civil war, Russian soldiers are facing trial. Ukraine and allied countries have long accused Russia of supplying separatists with weapons and troops. Russia has always denied having any military involvement in the conflict in eastern Ukraine.

It's not the first time that Ukraine has captured Russian soldiers in the conflict zone, but it has always exchanged them for Ukrainian soldiers being held by separatists. The most well-known such case was over a year ago, when nine Russian paratroopers were exchanged after just a few days in prison at the end of August 2014. At the time, Russian President Vladimir Putin said that the men had accidentally wandered over the border during a military exercise.

In the initial days of their imprisonment, it appeared as though Russia had turned its back on them. In an interview, Yerofeyev said he'd waited weeks to see a staff member from the Russian embassy. Later, Russia complained that Ukraine had blocked access to the prisoners. Putin has not once referred to the men in public. And there is no media campaign in Russia to free Yerofeyev and Alexandrov.

The contrast to Ukraine's behavior in the case of Nadiya Savchenko couldn't be greater. Savchenko is a Ukrainian soldier who was captured by separatists and is now on trial in Russia. Ukrainian President Petro Poroshenko and other prominent politicians are campaigning for her release.

According to media reports, Ukraine wants to negotiate an exchange with Russia: Yerofeyev and Alexandrov for Savchenko and Ukrainian filmmaker Oleg Sentsov, who was sentenced to 20 years in prison by a Russian court. There's been no official confirmation of such an offer. Many observers say that, if an exchange is to take place, it would only happen after a verdict. For Viktor Nikolyuk, it would be a good solution: "They should be sent back home and we should get Nadiya Savchenko in return."