Russia has stationed numerous attack and transport helicopters at its Armenian base near the border with Turkey. The move has come amidst rising tensions between Moscow and Ankara over the shooting of a Russian warplane. 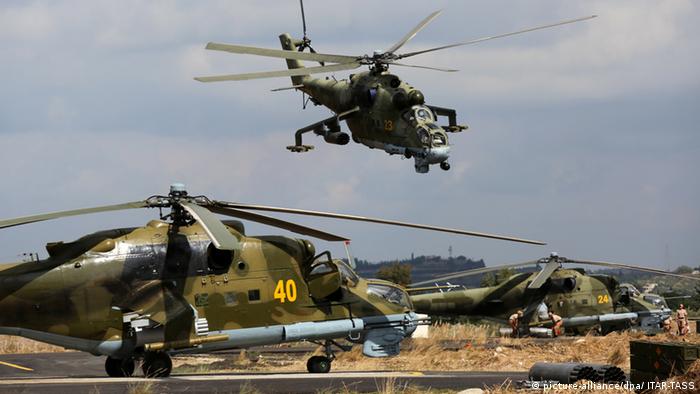 Russia deployed several helicopters to reinforce its military base in Armenia, said the Russian Defense Ministry to the RIA Novosti news agency on Tuesday.

The helicopters have been sent to the Russian Erebuni base which is located near the Armenian capital city of Yerevan. The Russians have another base in Gyumri, which is close to the Armenian-Turkish border.

So far, seven attack and transport MI-24 and MI-8 helicopters have been stationed in Erebuni with another batch set to arrive in the area before the end of the year. Russians had already been stationing MIG-29 fighter jets at the base since 1998.

Russia says it has placed the helicopters in Armenia to prevent a conflict with neighboring Azerbaijan. But the proximity of the helicopters to the Turkish border could also be seen as a warning to Ankara, as well.

On November 24, Turkey shot down a Russian warplane on the Turkish-Syrian border, locking the two countries in their worst crisis since the Cold War.

Turkey's Prime Minister Ahmet Davutoglu announced on Tuesday that the country is open to talks with Russia, but that it was considering retaliatory measures against Moscow.

"If we find it necessary, we will introduce retaliatory sanctions," Davutoglu told members of his ruling Justice and Development Party (AKP). "But we hope that the crisis with Russia will be overcome and there will be no need to resort to these measures," he added.

Despite being open to talks with Russia, Davutoglu emphasized: "We will never accept being dictated to."

Turkey also summoned the Russian ambassador on Monday over images of a Russian soldier "brandishing a rocket launcher" as he traveled through Turkish waters.

Russia ratchets up war rhetoric - and not just in Syria

A rock band sings about taking Berlin; politicians and the media threaten a nuclear attack. The war rhetoric in Russia is impossible to ignore. But there's a different mood within Russian society. (05.12.2015)