Vladimir Putin critic and prominent Russian dissident Alexei Navalny is being treated in Germany after being moved by air ambulance from Siberia. His supporters believe he was poisoned; the Kremlin denies this.

Germany reaffirms offer to have Navalny treated in Berlin

Russian dissident politician Alexei Navalny landed at Berlin Tegel airport after being airlifted from a hospital in Omsk, Russia. He is being treated for suspected poisoning at Berlin's Charite hospital.

The German military brought him to the hospital from the airport in an intensive care transporter, according to dpa news agency. The Russian opposition leader is currently in a coma and breathing through a ventilator.

Jaka Bizilj, founder of Cinemas for Peace, the German NGO that funded Navalny's flight to Berlin, told DW that the politician was in stable condition.

"The good news is that he's stable, so the whole travel did not affect him," Bizilj said. "But there is no reason to celebrate, because he is in a very critical condition. So the real work starts now with the doctors at the Charite," he added.

Berlin's Charite hospital confirmed in a statement that it had admitted Navalny and was carrying out an "extensive medical diagnosis."

Navalny's wife Yulia visited the Russian opposition leader in the hospital on Sunday, making no comments to reporters. She was accompanied by one of her husband's aides.

The German government said it "hopes that the treatment at Charite leads to an improvement in his condition and enables a full recovery," according to an official spokesperson.

Bizilj said Navalny's family was relieved that he was now "in a first-class hospital" and would have access to good treatment, but he noted that his recovery would likely take a long time.

"As we have heard from the doctors, if there would not have been this emergency landing in Omsk, if they would've tried to fly on to Moscow, he would have died," Bizilj said. 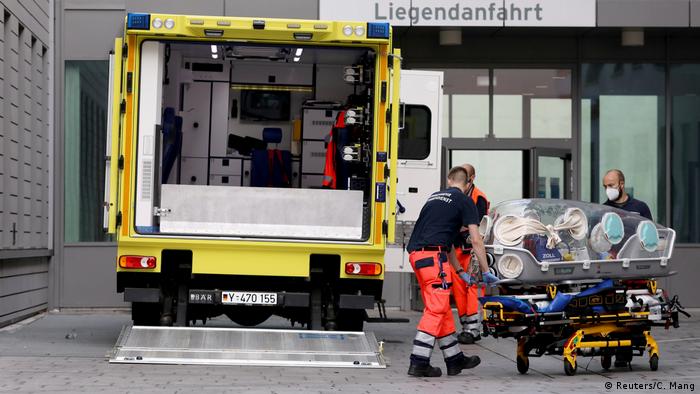 Navalny is being treated for suspected poisoning at Berlin's Charite hospital

Wrangling between Germany and Russia

Navalny left Russia early Saturday on a flight bound for Germany following more than 24 hours of wrangling between German and Russian medics.

German Chancellor Angela Merkel was among those who pushed for a speedy transfer for Navalny to Germany.

Shortly before takeoff, his spokeswoman Kira Yarmysh wrote on Twitter that he had boarded the plane.

"The fight for Alexei's life and health is just beginning and there is a long way to go, but at least the first step has been taken," she said.

Navalny was rushed to hospital in Omsk on Thursday, he fell into a coma after a suspected poisoning. But Russian doctors have said there is no evidence of poisoning, claiming Navalny has a "metabolic disorder."

Russia gave permission for the NGO to transfer the 44-year-old to the German capital from Siberia on Friday. Initially, Russian medical professionals said he was not in a fit state to travel, but relented when the German doctors declared he could be transported.

The politician and corruption investigator is one of Russian President Vladimir Putin's harshest and most prominent critics. His supporters say that tea he drank was laced with poison and the Kremlin is responsible.

Navalny's supporters said the delay in giving permission for him to be transferred was a ploy to stall his treatment until there was no more poison in his system. The Kremlin denied the claim.

Like many other opposition politicians in Russia, Navalny has frequently been detained by law enforcement and pro-Kremlin groups.

Sergei Guriev, a Russian economist and friend of Navalny, told DW that while it was not clear who was behind the attack on Navalny's life, it was evident the Kremlin responsible for doing nothing against people who sought to hurt the politician.

"It is very important to remember, it’s not the first attack on Navalny using chemical agents," Guriev said.

Navalny was rushed to hospital in 2017 from jail in what doctors called a "severe allergic reaction" but supporters suspect may have been a poisoning.

Guriev said that upcoming regional elections could have put the opposition politician in the spotlight. "Navalny still is a very effective communicator," he said, noting that his weekly youtube channel has millions of views.

"Of course the government didn’t want him to be on air in the coming weeks until this election," Guriev added.

Guriev believes the attack on his life won't deter Navalny and thinks he could even return to Russia, once he has recovered.

"The fact that he’s been attacked before and still continued his very important work, I would think that he will actually come back, he will not stop his fight," he said.

Germany reaffirms offer to have Navalny treated in Berlin