Russian “arms dealer” to be handed over to the United States | World| Breaking news and perspectives from around the globe | DW | 20.08.2010

Russian “arms dealer” to be handed over to the United States

A court in Thailand has ruled that a Russian man suspected of selling arms to rebel groups around the world is to be extradited to the United States within the next three months, overturning a previous decision. 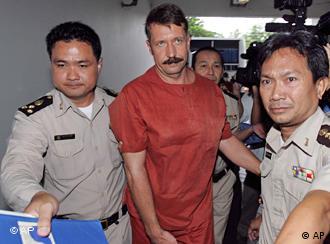 Bout is accused of conspiring to sell millions of dollars worth of weapons.

A court in Bangkok said that Viktor Bout, 43, must be extradited to the US within three months, or else permitted to go free, in keeping with Thailand's extradition rules.

Bout was arrested in Bangkok in March 2008 when he was caught in a sting operation led by US agents posing as arms buyers for the FARC rebel group, the leftist "Revolutionary Armed Forces of Columbia." The US then sought his extradition to face charges.

Last year the Bangkok Criminal Court rejected the extradition request on the grounds that Thailand deemed FARC a political rather than a terrorist group. Thai law prohibits extradition for political offenses.

However, the appeals court has now overturned that verdict, ruling that Bout had engaged in criminal activities.

Bout's lawyer in Thailand, Lak Nittiwattanawichan said, "the US government has interfered with our judicial system."

Russia had pleaded with Thai authorities for Bout's freedom, claiming there was no proof that the former Soviet air force officer was an arms dealer.

Russian Foreign Minister Sergei Lavrov said on Friday that Moscow believes the ruling was made "under very strong external pressure."

"We regret this... unlawful political decision," Lavrov said during a visit to Armenia.

Bout faces life in prison if convicted in the US on terrorism charges.

New Colombian President Juan Manuel Santos faces a difficult month before his inaugeration in August as the UN Human Rights Council is expected to hear allegations about his and his predecessor's role in civilian deaths. (12.07.2010)

Liberia's former president Charles Taylor has taken the stand at an international court in the Hague. This is the first time that the 61-year-old has testified in his war crimes trial. (14.07.2009)