Russian animal rights activists are sounding the alarm: Just as before the Olympics in Sochi, stray dogs will be killed before the World Cup is held. The activists demand a responsible approach to the problem. 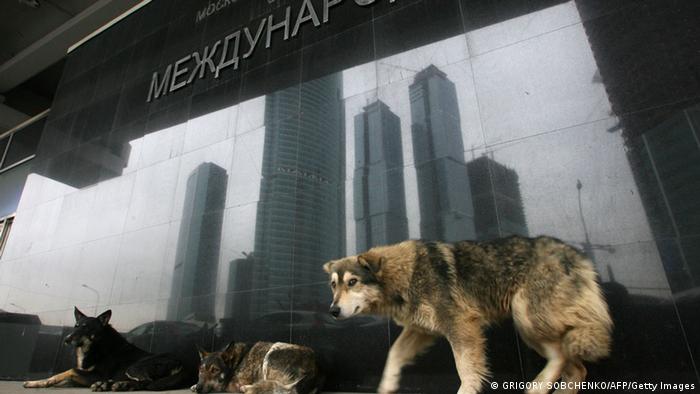 In the lead-up to the World Cup, animal welfare activists are drawing attention to the increasing calls for tenders on the websites of Russian authorities. With these state contracts it is not about "capturing, sterilizing and housing" neglected animals. They are to be "captured, transported away and disposed of." The 2018 World Cup will take place across eleven Russian cities, but only Moscow, St. Petersburg and Nizhny Novgorod have shelters for abandoned animals. One is currently being built in Kaliningrad.

Yelena Ivanova-Verchovskaya is deputy director of a group based in the Moscow Public Chamber, which monitors the regulation of the number of stray dogs in the Russian capital. In an interview with DW, she said that the authorities had promised to build temporary homes at the World Cup venues.

"Two to three months ago it was said that the dogs were to be captured, sterilized, housed and released after the World Cup. But the problem that has existed for decades cannot be solved in such a short time. Of course, we will not be able to save all of them," the animal rights activist fears.

In 2008, a program in the Russian capital to capture, sterilize, vaccinate and release stray dogs was discontinued. Since then, the animals are captured and placed in a total of 13 municipal shelters. Once a year the authorities announce the number of dogs that have been captured.

"The amount of money you get depends on how many dogs you catch. The animals are registered in the shelters, but the number of places is limited. All shelters are overcrowded," complains Ivanova-Verkhovskaya. She says that nobody checks the occupancy rate of the shelters and has called for the establishment of an appropriate control body.

This year 900 million rubles (€12.3 million) have been allocated to catching and housing dogs, last year it was 670 million roubles. Despite the increase in funding, conditions in the shelters are deteriorating from year to year because they are overcrowded. Moscow’s shelters are not even connected to the water supply, with two exceptions.

"The water that the dogs are given has to be brought in. Often there is none at all. The cages are made of old wooden constructions and must be repaired constantly. There is only money for minor repairs, but that is not enough," says Ivanova-Verkhovskaya.

Animal rights activists caution that the program to capture and subsequently release the dogs may be stopped in other Russian cities. It was already banned in Rostov-on-Don in 2016 and the Supreme Court argued that the release of dogs violates the right to a safe environment. Commenting on the consequences, Ivanova Verkhovskaya said: "Although it is permitted to capture and house the animals, there is no room for them, but they cannot be released either. So, the animals are killed under various pretexts." In order not to violate the law, dogs are diagnosed with rabies or heightened aggression.

Read more: How the World Cup will impact the Russian economy

In addition to the calls for tender, cities also conclude direct contracts with companies to catch a certain number of dogs. However, only very few of these animals are put into shelters, for example, around 40 out of 4000, while the remaining animals are usually diagnosed with diseases, which no one verifies. The animals are then killed.

"There was a shocking case near Moscow, where dogs were burned alive to save money on putting them to sleep," animal protection activist, Viktoria Pavlenko, told DW. She says that unscrupulous companies often win the tenders. "Mostly the dogs die while being caught or they are put to sleep in the transporter," criticises Pavlenko.

To prevent this from continuing, animal rights activists want a uniform law on the responsible treatment of animals: Stray dogs should be allowed to be captured and then released. A corresponding bill was adopted at first reading. However, the second and third readings have been repeatedly postponed.

Last autumn, animal rights activists went on an open-ended hunger strike near the Russian parliament. They were demanding the final adoption of the law on the responsible treatment of animals. Other activists held individual vigils in Moscow. In other Russian regions, there were local campaigns and flash mobs. But Russian authorities have not responded.