US President Joe Biden promised this week to send more US troops to bolster NATO's allies in Central and Eastern Europe. The West believes that Russia is preparing to invade Ukraine. 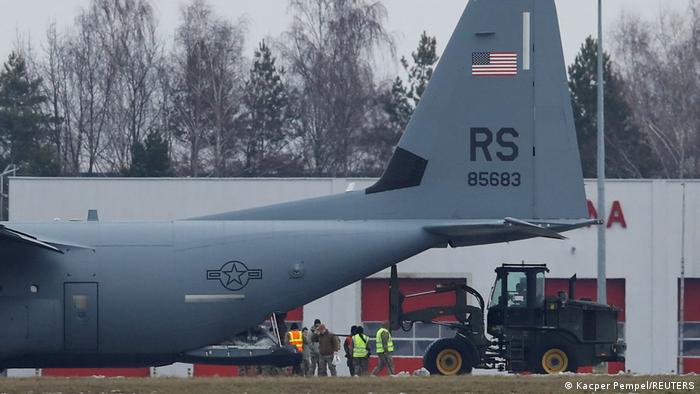 He also said the bulk of a contingent of 1,700 US soldiers would come "soon."

A Polish military source said the plane was carrying US chain of command personnel.

TV footage showed temporary accommodation being prepared at the G2A Arena in the southern Polish town of Jasionka, while workers could be seen building a fence around the venue.

The deployment comes amid fears that Russia could invade Ukraine. The US already has some 4,500 troops in Poland.

Washington said last week that it would send about 3,000 additional troops to Central and Eastern Europe to defend NATO members against any "aggression."

This will include 2,000 troops being moved from the US to Germany and Poland. Another 1,000 US soldiers already in Germany are being sent to Romania.

The US and its allies have accused Russia of amassing some 100,000 troops on the borders of Ukraine in preparation for an invasion.

The US and EU have vowed to impose devastating sanctions on Moscow if it attacks.

Russia has denied the plans, but says it could take unspecified military measures if its demands are not met. Among other demands, the Kremlin wants NATO to pledge to never admit Ukraine as a member.

Russian Deputy Foreign Minister Alexander Grushko complained that the US deployment would make it harder for a compromise between the sides.

NATO defense ministers are expected to discuss further reinforcements at their next meeting on February 16-17.

Is there a Russisan 'false flag' plan?

German chancellor to travel to Washington

German Chancellor Olaf Scholz is expected to discuss Ukraine during his first meeting with US President Joe Biden on Monday.

Berlin's refusal to ship arms to Ukraine, its often muddled messaging on potential sanctions and above all its refusal to scrap the Nord Stream 2 pipeline project to provide cheap Russian gas to Germany have all irritated Washington.

Scholz is also scheduled to visit Moscow later this month.

US officials have said they obtained evidence of a Russian plot to fabricate a pretext to invade Ukraine. Moscow has deployed more than 100,000 troops to Ukraine's borders but maintains that it is not planning an attack.