Russia to ban Atlantic Council NGO once led by US envoy

Russian prosecutors decided to ban the pro-western Atlantic Council NGO after finding its activities pose a threat to Russia's "constitutional order." The NGO representatives say they were not informed about the move. 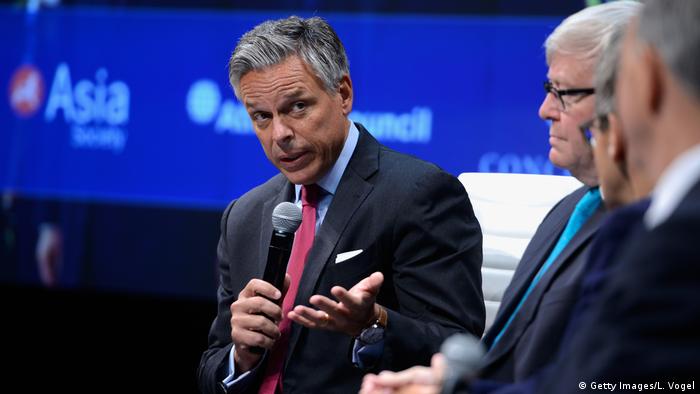 Jon Huntsman at an Atlantic Council event in 2015

The US-based Atlantic Council has been listed as a "security threat" in Russia and is set to be banned, Russian prosecutors have said.

US ambassador in Moscow, Jon Huntsman, chaired the pro-Western NGO between 2014 and 2017.

On Thursday, the prosecutors said the Atlantic Council's activities "pose a threat to fundamentals of constitutional order and security of the Russian federation."

They did not provide details on the move.

Once the decision is processed by the nation's justice ministry, the think tank is set to join the likes of George Soros' Open Society Foundation on the banned international NGO list, which currently has 17 names. These organizations are prohibited from operating on Russian territory and Russian citizens are not allowed to work for them, according to Russian news outlet Meduza.

The Atlantic Council chairman Frederick Kempe said they were aware of the reports on their ban, but had received no notice from the Russian state.

"Russian authorities have not informed us, either formally or informally, about this decision," Kempe said in a statement carried by Russian news agency Interfax on Friday.

"We are disappointed by this decision and are studying its consequences," Kempe said.

The Atlantic Council was founded in 1961 to promote understanding among NATO member nations, and its headquarters are in currently in Washington DC.

Russia has moved against foreign NGOs in the years following the outbreak of Crimean crisis in 2014. Parallel to the push, Russian authorities have also used the strict "foreign agents" law to harass and pressure domestic activists receiving funding from abroad.

Russia's most prominent independent newspaper was accused of violating the country's "foreign agents" law. The paper ceased printing in March following Moscow's invasion of Ukraine, now it is no longer available online.

Russian lawmakers passed a law expanding the definition of "foreign agents," a tool used to crack down on Kremlin critics and impose new restrictions.

Singer Alla Pugacheva is the most prominent Russian celebrity to speak out against the Kremlin's war. Over the weekend, she sparked a furor with an Instagram post that said the war had turned Russia into a "pariah."