The Russian air force has moved several MiG-29 fighters and other aircraft to its military base in Armenia, officials say. The base is located some 40 kilometers (25 miles) from the Turkish border. 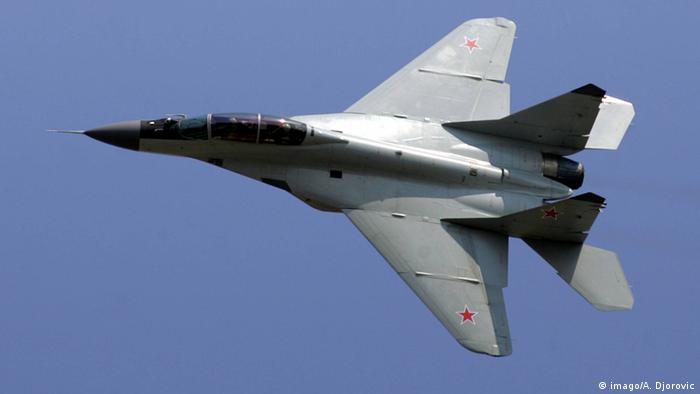 Four Russian MiG-29 jets, a modernized MiG bomber and a transport helicopter have been dispatched to the air base near the Armenian capital Yerevan, the Russian military said on Saturday.

The advanced, fourth-generation warplanes are to join nine Russian MiG-29 jets already stationed in the compound at Erebuni airport, and be put on active service "in the near future."

"Pilots of the air base will start making test flights with the newly-arrived planes in mid-March," the army said in a statement.

Armenia hosts two Russian military installations: an air base at Erebuni airport near Yerevan and a base for ground troops in Gyumri. The Erebuni base in the small ex-Soviet republic is situated around 40 kilometres (25 miles) from the border with Turkey.

Tensions between Ankara and Moscow

Relations between Turkey and the ex-Soviet state have often been tense, burdened by territorial disputes with Turkish allies and Ankara's refusal to recognize the alleged Ottoman-era genocide of Armenians.

The Turkish border with Armenia has been closed since 1993.

In recent months, relations between Ankara and Moscow have also taken a steep dive after the Turkish air force shot down a Russian Sukhoi bomber over Syria. The two countries are currently at loggerheads over Russian air support to the Syrian regime.

Recalling the genocide on Armenians perpetrated by the Osmanian Empire a century ago, an orchestra of German, Turkish and Armenian musicians is performing world premieres in Berlin. (27.11.2015)