The stadia are ready and there has been a great deal of investment in security and infrastructure ahead of the World Cup warm-up in Russia. The only thing missing so far, is interest in the competition. 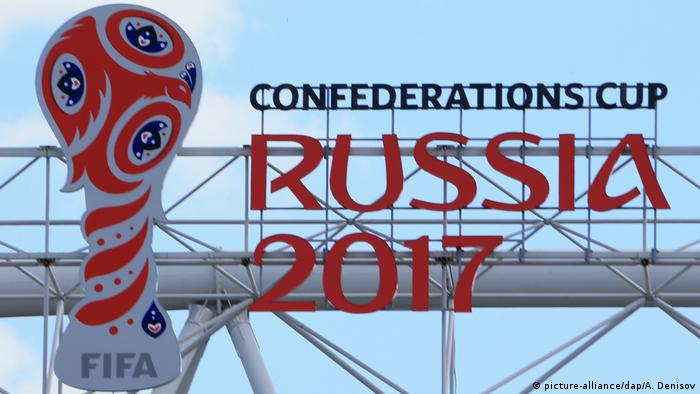 Russian President Valdimir Putin is not particularly renowned for his love of football or the Russian national side. Once asked about public funding for the sport, he is reported to have answered: "Russian football? I didn't know it existed."

Whether that is true or not, the fact is that neither the president nor the general public are overenamored with the Russian team. Little wonder after a raft of scandals and disappointing showings in recent years. "Hardly anyone would even recognise one of our players in the street," political scientist Michail Winogradow told DW. "Sport is political of course, in Russia as well. Just not really football."

First and foremost, football here means excessive security. Throughout the land, security measures were tightened following the recent terror attack on the St. Petersburg metro. The right to demonstrate is still in force, but after a decree by President Putin, street protests now be approved by the FSB security service.

Border controls have also been tightened. Foreign nationals are required to register with migration officials a day after entering the country at the latest: an experience that can be highly stressful. Under normal circumstances, it would be five days. The legislation has resulted in lengthy queues at registration offices and even longer faces among tourists. St. Petersburg is a host city at the Confederations Cup

Little support for the 'Sbornja'

It would appear a celebration of football is off the agenda just a week before the most important international sporting event of the year. Opinion on the matter is divided. Political scientist Winogradow feels Spartak Moscow's sensational Russian title win can not be topped. "No one even mentions the Confederations Cup."

Read: Can hooliganism as a spectator sport help contain violence?

On the other hand, soccer legend Evgeny Lovchev values the tournament greatly. "First of all because of the infrastructure," the 1972 player of the year in the Soviet Union told DW.

"We get to try out four newly-built or refurbished stadia. And we can improve our international standing as a sporting nation," he added referring to the doping scandal that engulfed Russian sport. Lovchev feels Russian athletes have been treated unfairly.

"And thirdly, it is a good test for our national side," he said somewhat hesitantly. "Although if we are honest, a team that is below 60th place in the FIFA world rankings is not going to turn things round." Therein lies the problem. The national side has failed to excite anyone in years. Passion for football is yet to take off, despite Russia's best efforts ahead of the Confederations Cup.

The Russian rail network is planning free travel for fans who present a match ticket. There will be additional services between the host cities Moscow, Kasan, St Petersburg and Sochi – all with disabled access and organic toilets. A rarity in Russia.

Fans will also be able to take advantage of free bus and tram travel on Moscow's transport authority Mosgortrans. The infamously grim-faced escalator wardens in the metro are being kitted out with shiny new uniforms. As a bonus, they will also be permitted to smile. Sometimes.

But the major progress will come when complicated Cyrillic stations and routes such as Petrovsko-Razumovskaya or Serpuchovsko-Timiryazevskaya are given additional plain numbering that foreigners can easily understand. Locals will be grateful as well. The names of Moscow's palatial metro stations are real tongue-twisters even for native speakers. 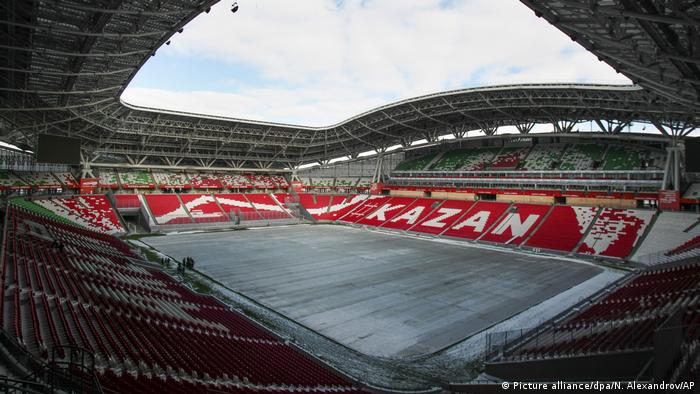 Kasan's new-look stadium will jhost the Confederations and World Cup

The Russian state has set aside 11 billion rubels ($1.12 billion, 1.75 billion euro) for infrastructure projects for the Confederations Cup and the 2018 World Cup. Officials insist it is all in accordance with FIFA requirements and that expenditure will be transparent and tightly controlled.  Of course, there are people keenly anticipating the two mega events.

Maria Rjazhanova is a 21-yearl-old volunteer from Kasan. When Russia was awarded the world cup in 2010, she was just 14. "Back then I though 'how wonderful!' When I'm grown up, I will be able to experience a real world cup in my home city," she told DW.

And she is not alone. 170,000 Russian boys and girls obviously felt the same way. Seven years later, they all applied to be volunteers at the Confederations Cup. "The competition was as stiff as applying to an elite university," she says proudly. The organizers can at least count on her love of the game…