Russian punk rock group Pussy Riot hung rainbow flags outside multiple government building on President Vladimir Putin’s birthday to send one message: "The state should not interfere in the life of the LGBTQ community." 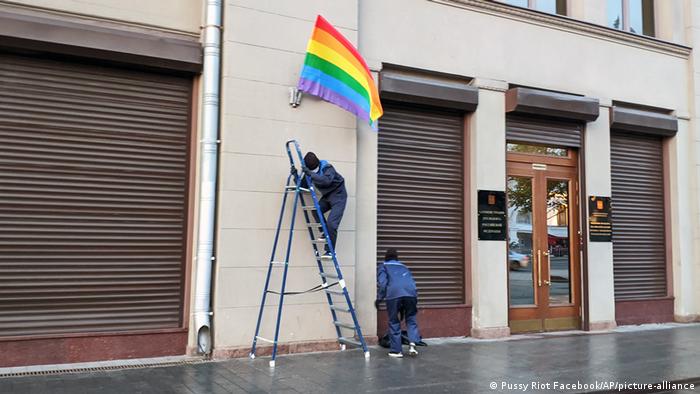 "We chose the rainbow flags as a gift for Putin as a symbol of missing love and freedom," the group said through a post on Facebook.

The flags were hung in front of the Ministry of Culture, headquarters of the domestic secret service FSB, the presidential administration, as well as the Russian Supreme Court.

Read more: Pussy Riot's Maria Alyokhina's 'Riot Days' are not over yet

"The state should not interfere in [the] life of the LGBTQ community," the post continued. "But if it does, then the community can intervene in the life of the state. You yourself like to say "symmetrical response" in such cases."

Two members of the group — Vasily Andrianov and Elizaveta Diderikh — were arrested and released later on Wednesday for holding rallies in downtown Moscow.

The group has been critical of the Russian government’s treatment of sexual minorities, often holding international concerts to bring attention to the government’s actions. 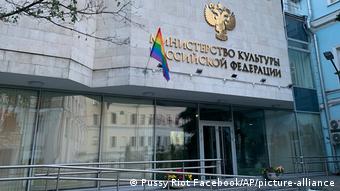 Pussy Riot put together a number of demands on the occasion of the president’s birthday, which they want to be celebrated as LGBTQ Visibility Day each year.

The post also called for an investigation into the kidnapping and murder of sexual minorities in the republic of Chechnya, as well as an end to the harassment of same-sex partnerships and families.

While homosexuality is not a criminal offense in the country, a recent constitutional amendment says that marriage can only take place between a man and a woman.

What characterizes Russian feminism? Should we fear Putin? DW talked to Maria Alyokhina, front woman of the feminist punk rock group Pussy Riot as they start their German tour.

In 2012, three members of punk group Pussy Riot were detained after an anti-Putin concert in a cathedral in Moscow. Five years later, Pussy Riot will finally perform their "feminist punk manifesto" in Germany.