The head of Russia's space agency has described "several attempts at drilling" a small hole on a Russian module on the ISS. Authorities are investigating whether the act was "deliberate interference in space." 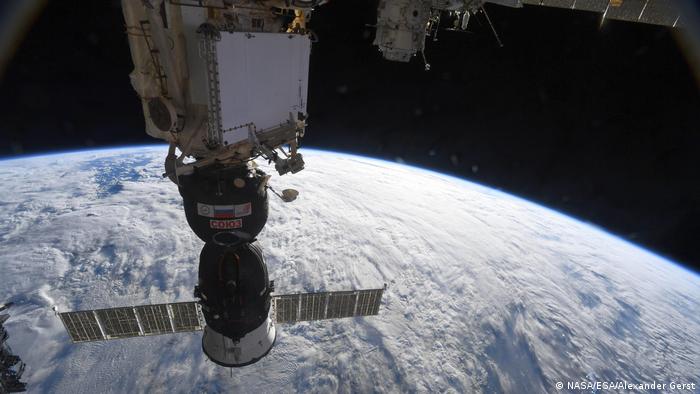 Russia's space agency on Wednesday said it will hopefully announce in the coming weeks the origin of a small hole discovered on the inner wall of Russia's Soyuz module on the International Space Station.

ISS crew members discovered the hole last week and quickly sealed it with tape and sealant. Although it caused a small pressure loss, the space agency said it was not life-threatening.

Earlier this week, Russian officials raised the idea that a person may have deliberately created the hole to sabotage the module.

Russian space agency chief Dmitry Rogozin said late Monday that there were "several attempts at drilling." He said the drill appeared to have been held by an "unsteady hand."

Rogozin questioned whether the hole had been a "production defect or some premeditated actions ... we are checking the earth version. But there is another version that we do not rule out: Deliberate interference in space."

But some working in Russia's space industry remained skeptical it could have happened in space. Alexander Zheleznyakov, a former space industry engineer, told Russia's state-run TASS news agency that he was unconvinced that a crew member would have committed such an act.

"Judging by what I saw in the photos, it must have been done on earth. The hole is in a place that is very hard to get to. Drilling it would not be easy," Zhelenznyakov said.

"Most probably, a worker drilled a wrong hole and then patched it up and then either avoided telling anyone, or those he had informed preferred to keep quiet."

US-Russia cooperation in space is one of the few remaining areas untouched by Washington's sanctions against Moscow.

Alexander Gerst on the ISS

Alexei Navalny heading back to Russia amid arrest threats 26m ago