Russian historian Yuri Dmitriyev, who also serves as a local head of the Memorial rights group, was found guilty of abusing his adopted daughter. His supporters say charges against him are politically motivated. 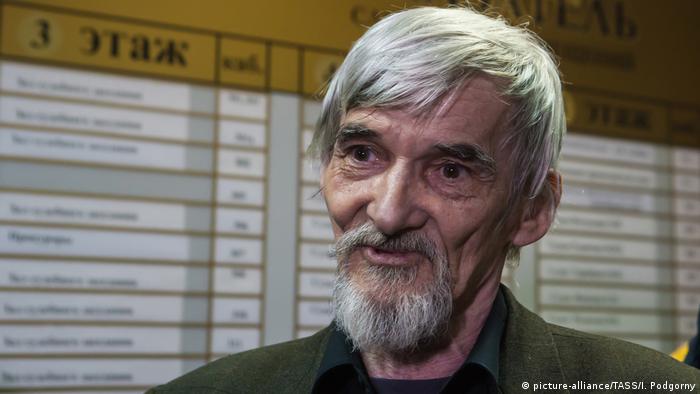 Supporters say Dmitriyev, who worked closely with a prominent rights group, is being targeted for his work

A Russian court on Monday found historian Yuri Dmitriyev guilty of possessing images of child sexual abuse and indecent acts against his adopted daughter, as well as possession of weapon components.

The Petrozavodsk City Court thereby increased a jail sentence for the prominent Gulag historian to a total of 15 years in a penal colony. He was previously sentenced to 13 years on what his supporters insist are fabricated child sex charges.

Dmitriev has denied the accusations. The historian serves as a local head of the prominent Russian rights group Memorial, which may be shut down by the courts this week.

"Yuri Dmitriyev hears the latest verdict against him — 15 years," Memorial said on Twitter.

In the video, the 65-year-old is heard saying "Thank you for your support."

Supporters claim Dmitriyev, who has spent his career researching dark periods in Russia's history, is being targeted and punished for his work locating and exhuming mass graves of people killed under the rule of Soviet dictator Josef Stalin.

Dmitriyev also helped open the Sandarmokh Memorial in memory of thousands of Stalin's victims who were murdered in 1937 and 1938.

The verdict ends a long-running episode that saw the prosecution accuse Dmitriyev of child sex abuseover a period of several years.

Dmitriyev was first arrested in December 2016 for possessing naked photographs of his adopted daughter, following an anonymous tip made to authorities.

The historian said the nude photos had been taken to document the development of the child's malnourishment in case of problems with social services, as she had been underweight when he and his wife adopted her.

His claim was backed by experts, who did not classify the images as child sex abuse.

Dmitriyev was then charged with illegal possession of a part of a weapon the following year.

In April 2018, he was cleared of all but the firearms charge. Two months later, however, the regional Supreme Court overturned the verdict based on an investigator's interview with his daughter, who was 12 at the time, shortly after he was acquitted.

The case was returned to court with an additional sexual abuse charge, relating to inappropriate touching.

Artists, writers speak out in favor of Dmitriyev

Earlier this month, several Russian artists, authors and journalists spoke out in favor of Dmitriyev and decried charges against him.

In a separate appeal to the Council of Europe in 2020, prominent writers including Nobel laureate Svetlana Alexievich and Jonathan Littell called the historian "a bone in the authorities' throat."

"The Russian authorities are seeking to rewrite the history of Sandarmokh by slandering its discoverer and groundlessly accusing Dmitriyev of an outrageous crime," they said.