Moscow has baulked at a call to withdraw observers from eastern Ukraine, saying the "punitive operation" against separatists must be monitored. Ukraine has called on Russia to officially recognize its new president. 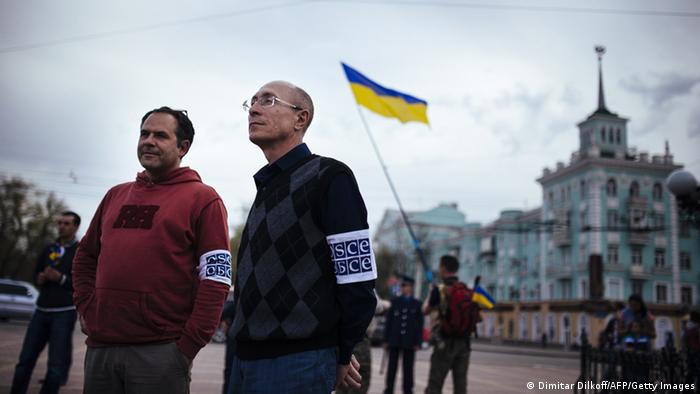 A Russian Foreign Ministry statement on Saturday said that the Organization for Security and Co-operation in Europe (OSCE) should maintain a presence in Ukraine's restive east, given Kyiv's crackdown on separatists in the regions of Luhansk and Donetsk.

"Amid Kyiv's intentionally intensified punitive operation in the east of the country, it is essential to step up the work of international observers," read part of the statement, published in response to comments by Wolfgang Ischinger, the OSCE coordinator on national dialogue in Ukraine.

Ischinger told the German broadcaster ZDF that the monitor mission might have to withdraw if the organization fears for its employees' lives.

Four monitors remained in detention on Saturday, with pro-Russian separatist leader Vladimir Rogov confirming the men were suspected of espionage."We are in constant contact with the OSCE mission," said Rogov. "They know that their boys are okay."

Russian mediators are in negotiations on behalf of the detained men, who include a Dane, an Estonian, a Swiss and a Turk. The group was stopped by a group of armed men at a roadblock near to Donetsk on Monday. A second group of five people is also being held, although it remained unclear on Saturday if they had been accused of any offence.

There was more fighting on Saturday between government troops and the rebels, with a government-controlled checkpoint in the city of Slovyansk, coming under fire. Rebels have made daily attempts in recent weeks to break the army's grip around the city.

Ukraine's acting Foreign Minister Andriy Deshchytsa on Saturday said Russia had no grounds not to recognize chocolate maker Petro Poroshenko, who won 54.7 percent of votes in a May 25 presidential poll, as Ukraine's new president.

While Russian President Vladimir Putin has promised to respect the will of Ukrainian voters, he is yet to congratulate Poroshenko on his win.

"Five days since elections, there has been no official recognition yet," Deshchytsa wrote in an opinion piece for the Saturday edition of the English-language Kyiv Post newspaper. "Obviously, the Russian Federation doesn't have legal grounds to question [the election's] legitimacy," he said.

Deshchytsa also accused Russia of mounting a propaganda campaign against its operations against the rebels, blaming it for creating "an avalanche of doubletalk and fake news."

The Kyiv Post on Saturday said six pro-Russian soldiers had died in fighting while trying to collect the bodies of fallen comrades who died in a battle earlier this week that saw Ukrainian forces broadly retake control of Donetsk airport.