Russian police claim "personal" reasons rather than hate were behind the murder of LGBT+ activist Yelena Grigorieva in St. Petersburg last weekend. The suspect was identified as an "ex-convict born in Kyrgyzstan." 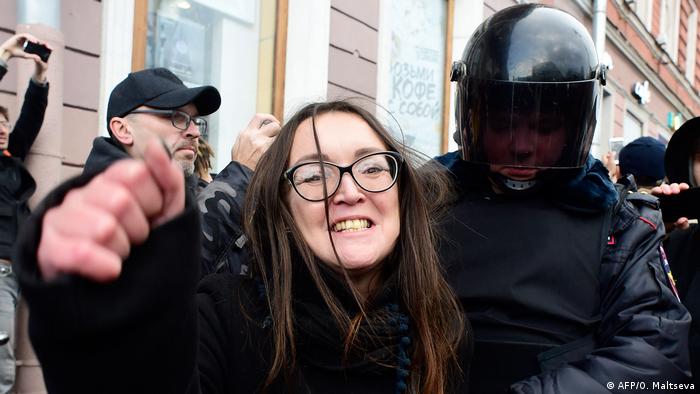 St. Petersburg's Investigative Committee said Yelena Grigorieva was knifed eight times by the ex-convict "in a state of alcohol intoxication" during a personal argument with the LGBT+ activist.

The assailant and victim had "known each other previously," the Committee said, adding that it had evidence that the killing was not a hate crime.

It did not name the suspect, identifying him only as a man born in Soviet Kyrgyzstan in Central Asia in 1981.

Grigorieva, 41, was a prominent protester at LGBT+ (Lesbian, Gay, Bisexual and Transgender) and political rallies. She had in the past reported multiple threats against her to the police, which allegedly did not act on them.

Yyhod, a Saint Petersburg LGBT+ group, accused investigators of failing to look beyond the "personal" reasons to search for other possible motives.

Russian law enforcement often refused to "verify and take into account a hate motive," said Yyhod, referring to a screenshot taken by Gregoryeva in July that showed her name listed on anti-LGBT+ website "Pila." The site became inaccessible earlier this week.

Brutal attacks against members of the LGBT+ community are a regular occurrence in Russia, where perpetrators are rarely prosecuted, according to human rights activists.

On Wednesday, the Council of Europe, the continent's primary human rights body, urged member Russia to conduct a full and transparent investigation into the murder.

Homophobia is more widespread in Poland than in most other eastern European countries, research suggests. But there is also a sense of optimism in the LGBT community despite efforts by conservative MPs to undermine it. (23.07.2019)

Police have used tear gas to disperse hundreds of people at a banned gay pride march in Istanbul. Activists had gathered to promote rights for gay and transgender people. They had hoped the ban would be lifted. (30.06.2019)