Rudy Giuliani, a former New York mayor, is one of three new attorneys joining US President Donald Trump's legal team. The move sees Trump gain not only a media-savvy defender, but also an outspoken supporter. 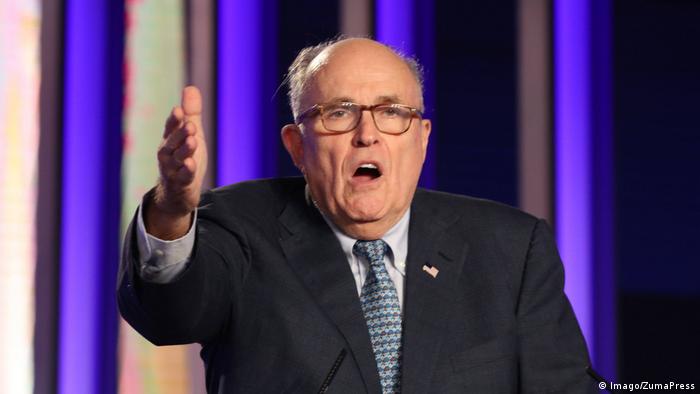 In a statement, Sekulow quoted Trump as saying, "Rudy is great. He has been my friend for a long time and wants to get this matter quickly resolved for the good of the country."

Giuliani, a former prosecutor, has been appointed along with south Florida husband-and-wife defense lawyers Martin and Jane Raskin.

Trump has so far struggled to retain a top criminal lawyer to represent him in the Mueller investigation. Washington lawyer John Dowd, the most recent head of his legal team, resigned in March.

Read more: Analysis: Despite Flynn's guilty plea, Trump presidency not over yet

The US president has been trying to decide if he should sit for questioning by Mueller's team. His legal team has met with investigators numerous times to define the scope of the questions he would be asked.

Russia has denied allegations that it interfered in the election and Trump has said there was no collusion between Russia and the US. He has previously called the Mueller probe a "witch hunt."

Giuliani had a notable career as a federal prosecutor before he became mayor of New York in 1994, a position he held until 2001.

He was the Manhattan US Attorney for much of the 1980s, during which he brought many high-profile cases aimed at insider trading on Wall Street, and prosecuted stock trader Ivan Boesky and the firm of Drexel Burnham Lambert.

Since he left the mayor's office, Giuliani has been in private practice, most recently at international law firm Greenberg Traurig.

Giuliani has been an outspoken supporter of Trump ever since the early days of his presidential campaign.

Martin Raskin led the criminal division for the US Attorney's Office in Miami in the early 1980s, while Jane Raskin prosecuted organized crime cases in Boston.

The ex-mayor has withdrawn himself from consideration for a position in Donald Trump's incoming cabinet. Exxon Mobil Chief Executive Rex Tillerson is now the leading candidate for the secretary of state post. (10.12.2016)

Donald Trump under investigation for possible obstruction of justice: US media

US President Donald Trump is being investigated by special counsel Robert Mueller for possible obstruction of justice, The Washington Post has reported, citing unnamed officials. (15.06.2017)

Trump's lawyer said he was voicing his own opinion after initially saying he was speaking on behalf of the president. One outraged Democrat lawmaker warned any interference would lead to a "constitutional crisis." (18.03.2018)

Former New York mayor Rudy Giuliani has emerged as favorite to become the next Secretary of State. He is known for his hard-line law-and-order views and brusque manner. (15.11.2016)

Giuliani submitted false statements as he attempted to overturn the results of last year's presidential election, a New York appeals court ruled. The decision means he cannot legally represent clients for the time being.

Handwritten notes detail an exchange in which the former US president pushed for election results to be declared corrupt. Justice Department officials at the time said they couldn't "change the outcome of the election."

Kyiv officials are under the microscope for potentially spreading misleading claims about Joe Biden, according to a newspaper report. Federal prosecutors in Brooklyn are leading the probe.