Incumbent Klaus Iohannis has scored a resounding victory in the second round of Romania's presidential election. Iohannis pledged to fight corruption after the fall of the center-left government. 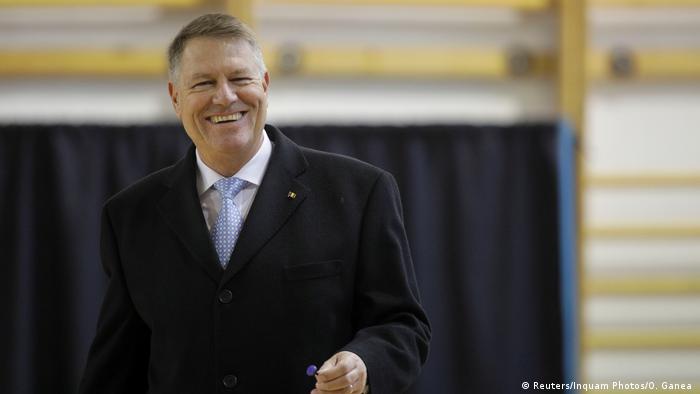 "The winner today is modern Romania, European Romania, the normal Romania," said the 60-year-old Iohannis, who was born in the former socialist country as a member of German national minority.

"I receive this victory with joy, thankfulness, modesty and with faith in Romania," he said.

Iohannis' first five-year term saw him repeatedly bump heads with successive PSD governments. Ahead of the Sunday vote, he pledged to fight corruption and restart judicial reform with allies in the new, center-right government led by the center-right National Liberal Party (PNL).

The former physics teacher urged people to go out and vote, sharing photos from the polling station.

With most of the votes counted, Iohannis had earned 63.2% of votes, followed by PSD leader Viorica Dancila with 36.8%.

Turnout at the election was about 50%, making it the lowest since the fall of Communism 30 years ago.

The election was fought amid resentment over judicial reforms seen to benefit PSD politicians, which led to street protests and irked European Union leaders. Iohannis has been praised by the EU for his attempts to protect the rule of law in Romania and for challenging attempts to curtail the independence of the judiciary.

The PSD former leader and strongman Liviu Dragnea was jailed on corruption charges in May, and the PSD-led government collapsed in a no-confidence vote in October.

Iohannis, whose power includes nominating the prime minister, challenging laws in the Constitutional Court and appointing some chief prosecutors, is expected to install anti-corruption prosecutors serious about tackling graft.

Iohannis' victory is regarded as giving a boost to the PNL before parliamentary elections in 2020.

Prime Minister Ludovic Orban's new government has won a confidence vote, ending a crisis that has held up the formation of the new European Commission. Romania's previous nominee was rejected by European lawmakers. (04.11.2019)

In the run-up to Brazil's presidential election, socioeconomic inequality is on many people's minds. In big cities, like Sao Paolo, many are struggling to survive.

Right-wing populist incumbent Jair Bolsonaro is facing a strong challenge from a former Brazilian president, leftist Luiz Inácio Lula da Silva. Lula has a strong lead in the polls and could win outright in this first round of voting.