Roma in Marseille struggle for a better life | Europe | News and current affairs from around the continent | DW | 08.12.2012

Roma in Marseille struggle for a better life

There are some 2,000 Roma living in Marseille, France - most of them on the streets, or in camps. But life has gotten harder for the Romany gypsies in the last few months. 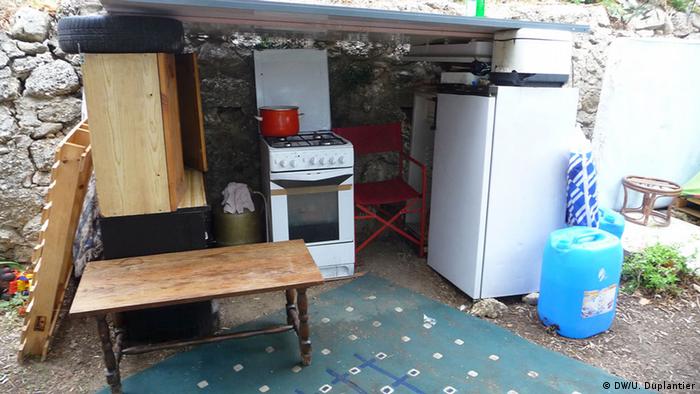 Make-shift kitchen in the camp in Marseille

It's an industrial area in the southeast region of Marseille where Roma Ciprian Radü set up his tent behind a plastic fence two months ago. But he will likely encounter problems at the unused site, as plans are underway to build a multi-story apartment building there. "This has been the best place we've ever had," said the slender man with dark circles under his eyes and a neatly trimmed moustache. He points to the spacious site dotted with olive and fig trees. "We're hidden here. The French live further up, and don't see us," he noted. "We don't bother anyone and we keep quiet." 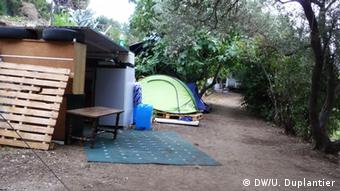 Tents and huts offer little shelter from the cold

Radü's family - three children, his wife and a grandmother - share three tents on the site. The largest tent contains an overstuffed sofa placed on a red velvet carpet. Next to it is where Rüdu and his wife sleep, along with their one-year-old child. It's crowded here. The family's entire belongings are in plastic bags, stacked neatly around the sofa. They've created a make-shift kitchen in the middle of the tent - composed of a table, cabinets and a gas stove, which Radü salvaged from trash dumps.

Always on the run

Four other Roma families, whom Radü knows from his home village in Romania, have set up house further down the site. They have no electricity here, and fetch water from a nearby hydrant.

"The person who oversees this site said we can stay here for another six months until they start construction," Radü explained. That's fortunate, considering his other experiences: In the past five years since Radü and his wife came to Marseille, they've had to move every three months. That always means packing up tents and belongings and moving on, after the owner of this site or that took them to court to get them off the property. But even here at their current site, which seems safe for the next few months, Radü is dreading winter in the tents. 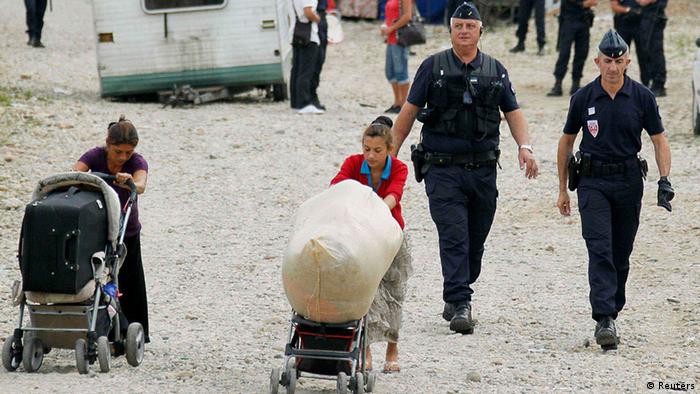 Roma camps are often evacuated in France, such as here in Saint-Priest, near Lyon

He said he has tried everything to rent an apartment. But everyone asks for papers - such as an earnings statement: "And since I can't get these things, I have to live in a camp," he said. Radü has frequently met his nemesis with such bureaucratic hurdles, despite having completed training as a landscaping gardener after coming to France. He was the only Roma among 21 French people in his training group. A landscaping company even wanted to hire him after he completed his training, under one condition: "The boss said that if I had a residence permit that extended beyond three months, that I could start the next day. But the prefecture could not give that to me and I couldn't find anyone willing to hire me for only three months," he said. "That's the dilemma for us Roma."

Citizens of Romania and Bulgaria, where most Roma come from, need a work and residence permit to get a job in France, despite their being members of the EU. Exceptional regulations are in place for another two years for these two countries that joined the EU five years ago. The result is that Roma do not have access to every job and a potential employer must go through a complicated process to be able to employ a Roma. 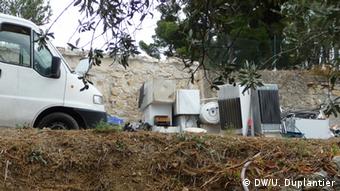 So Radü keeps food on the table for his family by selling scrap metal. He drives his beat-up truck through the streets of Marseille from morning till evening, gathering anything he can sell later. After sundown, the Roma families often sit together in the dark, deliberating how life is to go on. But there's one thing they all agree on: "Living conditions in Romania are not as good for children as they are here," said the mother of a family of six. "We can offer our children a better life here."

Radü was one of the poorest people in his village in Romania. He also had to work under the table there, but his job at a construction site still did not earn him enough to take care of his family.

He sometimes can't scrape enough together in France to buy groceries either, but there are still more opportunities and support here. He stays in close contact with Roma associations, and almost always has a back-up plan to keep his family afloat. "We find food, whose expiration date hasn't even expired, in grocery store dumpsters," Rüdu explained. "Sometimes I say that you can't even buy the things in Romania that people throw away here." Like fruit and vegetables, which the family could not afford in Romania.

While Radü's kids swing gaily on a construction they've built from some ropes and a chair, he contemplates how he could get enough money together for a house in Romania, should he have to return to his home country. After all, one never knows what could happen in France, or Europe in general, he noted. "Life is tough for us," Radü sighs. "But I have no other choice. If I want to get ahead, I have to be patient. One day, the laws will change."

France will have to repeal interim regulations for Romanians and Bulgarians in 2014. Then, Roma from these countries will be able to enjoy the same rights as other Europeans. Radü hopes then that his wish can come true: "I would like my family to be able to live like all the French do one day, after all, this country feels like home to me now."

Politicians from Germany and other EU members called on Brussels to revoke visa-free travel to the bloc from Serbia and Macedonia. They say there is no reason for the increase in asylum applications from the Balkans. (26.10.2012)

At a small dead-end street in a suburb of Cologne-Roggendorf, well kept houses line the streets. Popularly known as a "Gypsy settlement," the area is home to 18 Sinti families. (24.10.2012)