'Rocky' on canvas: The art of Sylvester Stallone

Long before actor Sylvester Stallone became famous as "Rocky" and "Rambo," the Hollywood star was a prolific painter whose fine art works are now on show. 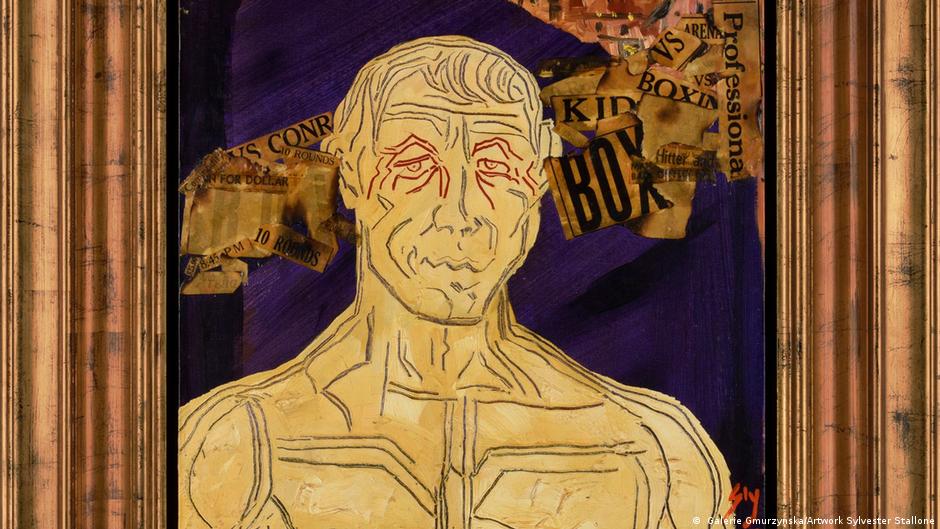 'Finding Rocky' from 1975 was created with a screwdriver on canvas

Back in the early 1970s when a story idea for a never-say-die protagonist was percolating in Sylvester Stallone's head, he decided to first visualize this character on canvas.

However, he didn't want to use a brush because he felt that this man was forged by the hardships of life. So instead, he carved an image on the canvas using a screwdriver.

"If he looked interesting visually, then I think that he would translate through to literature and then cinema," he said. "I know it sounds ambitious, but that was the genesis of Rocky."

Stallone would go on to famously complete a 90-page script in three-and-a-half days about poor Italian American boxer, Rocky Balboa, who gets a shot at becoming world heavyweight champion.

Released in 1976, the small-budget film catapulted Stallone to stardom and produced a slew of sequels — the most recent being "Creed 11" in 2018, co-starring Michael B. Jordan.

That success was quickly followed up by yet another multi-sequel vehicle that Stallone had originally co-written: "First Blood," released in 1982, tells the story of John Rambo, a Vietnam War veteran who struggles to adapt to regular life due to his post-traumatic stress disorder.

Stallone's reputation as a Hollywood action star was sealed — and quickly overshadowed the actor's other passion: painting. 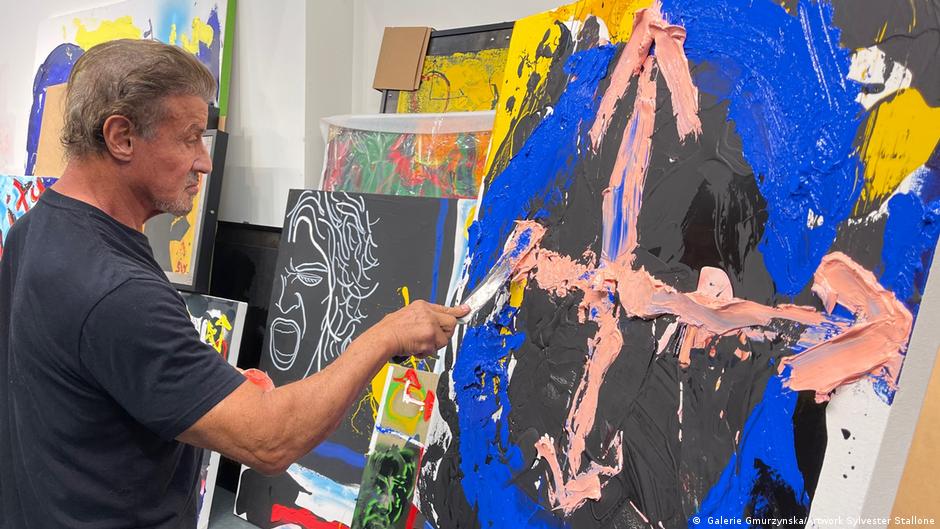 'Much better painter than actor'

Having discovered his love of painting at a young age, the young New Yorker used to sign his early experimental works "Mike Stallone." And despite his rising movie stardom, painting has remained a constant part of his creative life, his artistic output fueling his cinematic work and vice versa. In fact, he once deemed himself a better painter than actor.

"Painting is the purest of all arts. And it's not like film, where 500 people are responsible for the final product. Here it's one man who has to take the fame, the ridicule or the criticism," the actor said at a press conference on December 3, when he visited the Osthaus Museum Hagen in western Germany to launch an exhibition entitled "Sylvester Stallone: 75th Birthday Retrospective."

He added that despite having painted for more than 50 years, it remains a new world to him. "Fear and anxiety push you forward," said the 75-year-old. "They push you to the next level. I also approached painting with respect and later ventured into other forms. Failure, however, remains the best way for me to learn."

In the 1970s and until the end of the '80s, Stallone created dark, expressive works in which, among other things, he processed the death of his manager. At that time, he worked mainly with illustrative graphic lines and bright colors.

This changed around 1990, when the avid art collector immersed himself in the world of contemporary art and studied artists such as Picasso, Gerhard Richter orAnselm Kiefer.

Inspired by the abstract works of Mark Rothko, he developed his own style and created numerous expressionist pieces including self-portraits. 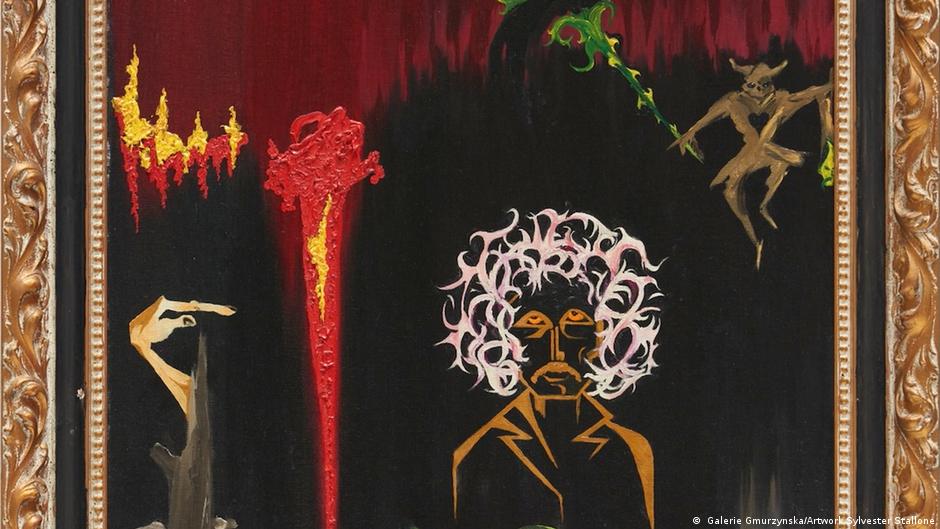 A fan of Edgar Allen Poe, Stallone painted this picture of the American writer and poet in 1966

"That's what I love about painting, it's the only true communication you can have," he once said. "Painting is the fastest and purest translator of the subconscious. When something is going on inside you and you hit the canvas, it's hard to fake it. The artist on the canvas is number one for me when it comes to conveying his feelings."

Sly gets a retrospective

Among other works, the screwdriver-carved piece from 1975 "Finding Rocky" will be part of the exhibition that will run from December 3 to February 20, 2022.

Charting the actor's works from the late 1960s to present day, and commemorating his having turned 75 in July this year, the collection features approximately 50 paintings, among them self-portraits and never-before-seen early works.

"Sylvester Stallone's expressive paintings energetically demonstrate to us what constitutes our existence. His themes revolve around play, around dreams, around fantasy, around harsh realities, around faith and around death," explained Tayfun Belgin, the director of the Osthaus Museum Hagen, who also authored a bilingual catalog explaining Stallone's works. 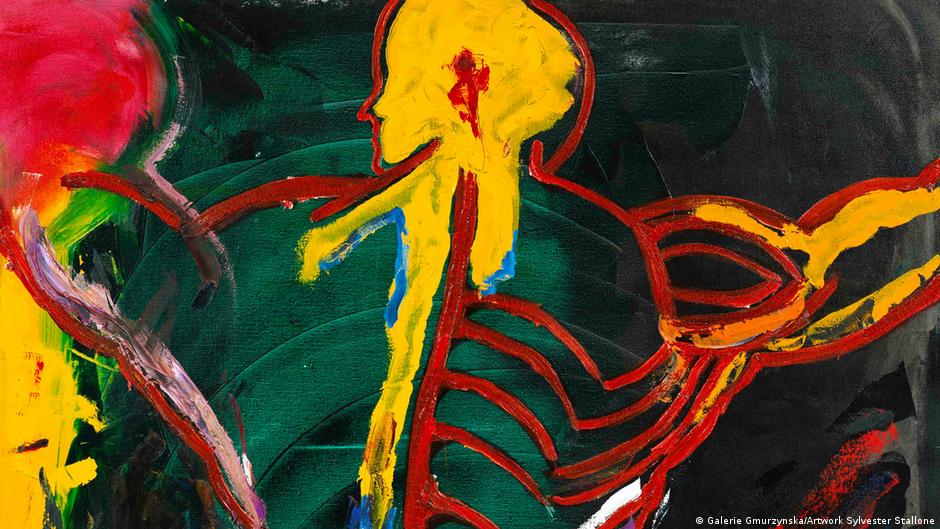 One of the prevalent themes in his work is time, with the clock being a recurring motif in his pieces.

Speaking to the Hollywood Reporter during a previous retrospective in Nice in 2015 he had said: "Early on in my life, I realized that man is totally pressed upon by the sense of time racing. Everything is timed. So, I started to put clocks on my images, usually the ones of actors."

Actor James Dean and Michael Jackson are among those the star has painted, while collectors of his works include fellow action star Arnold Schwarzenegger and John Travolta.

Another notable personality he painted almost 50 years ago is American writer and poet, Edgar Allen Poe. He has previously expressed interest in writing and directing a biopic about Poe, whom he greatly admires. If the project comes to fruition, he's most likely going to be behind the camera as director rather than take the lead role.