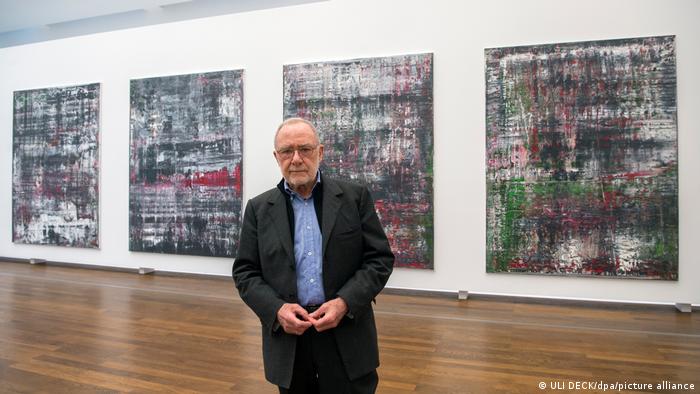 Gerhard Richter's four-part monumental work Birkenau is based on photographs secretly taken by a Jewish prisoner in the Auschwitz-Birkenau concentration camp in August 1944. The photographs showed guards, stripped prisoners, corpses lying on the floor.

But in Richter's paintings, the horror can only be guessed at, since the artist covered the photos with gloomy layers of paint. He made the motifs indiscernible and, by doing so, preserved their historical and retrospective content.

Richter's 2014 Birkenau cycle, with which he initially divided the art world, will find its permanent home in Berlin's Neue Nationalgalerie museum, which is currently being refurbished. More than 100 other works from the 89-year-old's foundation are to follow.

Gerhard Richter has long been considered one of the most important contemporary artists around the world. In the Kunstkompass, a German-published work ranking international artists, Richter has been the undisputed leader for 17 years. The works of the artist, who was born in Dresden and lives in Cologne, regularly fetch top prices at auctions. He however never wanted his Birkenau series to land on the art market.

Berlin is thrilled about the placement in the Neue Nationalgalerie. There, the Birkenau works will be accompanied by the four-part work Grauer Spiegel, and will initially hang in the Alte Nationalgalerie until September. Afterwards, the Birkenau cycle will travel to Japan in a Richter show. 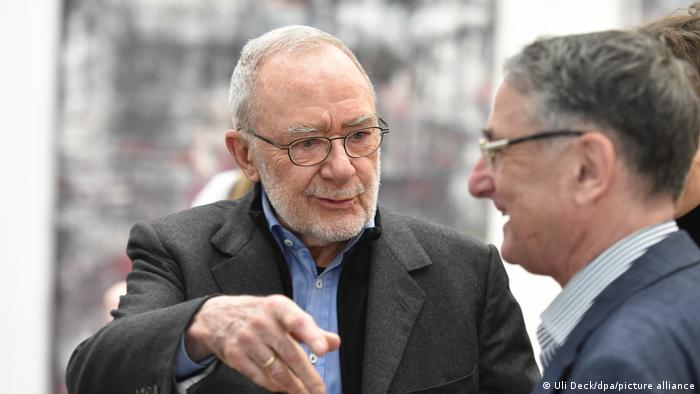 Richter speaking to a Holocaust survivor, Ivan Lefkovits, in 2016

Beginning in 2023, the works will be presented at the newly renovated Neue Nationalgalerie, which is scheduled to reopen in August, before they move to their permanent home in the future Museum der Moderne — planned by the Swiss architectural firm Herzog & de Meuron and under construction between the Berlin Philharmonic and the Neue Nationalgalerie. Here, Richter will be one of few artists including Rebecca Horn and Joseph Beuys who will have their own presentation floors and rooms.

The Prussian Cultural Heritage Foundation, which is funded by the federal and state governments, welcomes Richter's loan. Foundation President Hermann Parzinger says the loans are a "very special highlight" marking the beginning of a close collaboration with the Gerhard Richter Art Foundation. The artworks, says Germany's Minister of State for Culture, Monika Grütters, give the "museum of the 20th century an impulse." And Richter remarked he is pleased about "a wonderful event and a great beginning of the cooperation with Berlin."

The artworks are bound to draw crowds of art lovers to the German capital. The retrospective on Richter's 80th birthday was the most successful solo exhibition of a living artist in Germany — 380,000 visitors flocked to the Neue Nationalgalerie in 2012. The room with its striking skylights previously housed works from Richter's famous October 18,1977 cycle — now owned by the MoMA in New York: a series of 15 paintings from a traumatic period in German history that, according to MoMa, "evoke fragments from the lives and deaths of the Baader-Meinhof group." 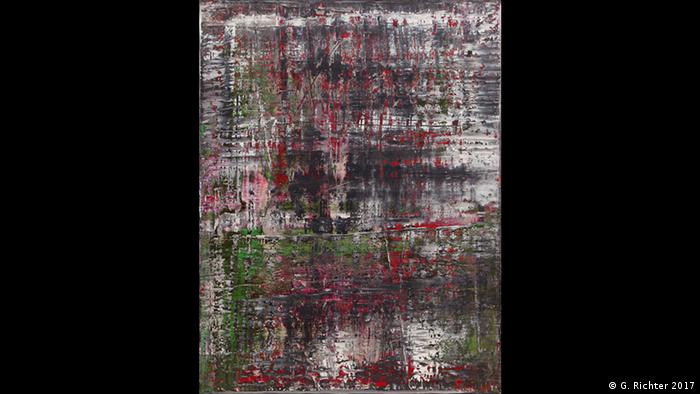 One of the 'Birkenau' panels

The Birkenau series, too, shows how Richter has for decades had an eye on German history. The artist was all the more surprised by the controversy the cycle initially triggered. He was accused of illustrating the Holocaust and thus giving the horror an artistic form. But is that true?

The huge color panels are crisscrossed with deep gray streaks, interspersed by green and red splotches of color. In typical Richter style, everything is blurred. Large-format photographic documents of the former concentration camp inmate, which gave the series of pictures their name, were but the starting point, the first layer of his painting, followed by many other painting processes. Without offering an interpretation, Richter deals with the sorrow and guilt of the worst atrocities of German history.

Former Nazi guard arrives in Germany after US deportation

The 95-year-old man reportedly confessed to serving as a concentration camp guard in 1945. He was handed over to German investigators upon landing at Frankfurt Airport.