Rockets hit near US Embassy in Iraq ahead of Soleimani anniversary

The US Embassy has intercepted at least three rockets fired into Baghdad's Green Zone. The attack comes ahead of the one-year anniversary of the assassination of Iranian general Qassem Soleimani. 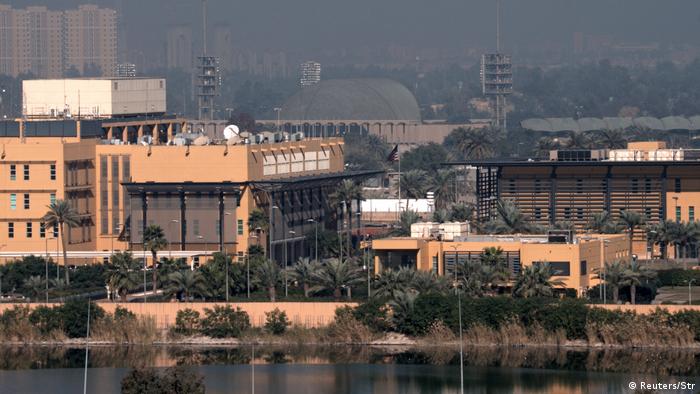 The US embassy's missile defense system shot down three rockets

The US Embassy in the Baghdad Green Zone was targeted in a rocket attack on Sunday, according to reports.

Iraqi security officials told The Associated Press on condition of anonymity that the embassy's C-RAM defense system shot down the rockets in midair, causing minor damage to a residential complex and parked cars. There were no reports of casualties.

"The US Embassy confirms rockets targeting the International Zone (Green Zone) resulted in the engagement of embassy defensive systems," said a statement released by the embassy.

"We call on all Iraqi political and governmental leaders to take steps to prevent such attacks and hold accountable those responsible,'' the statement said.

Joyce Karam, correspondent for The National based in the United Arab Emirates, shared a video on Twitter of the rockets being intercepted and wrote that the embassy had been "targeted with barrage of Katyusha Rockets and mortar shells."

"Everyone is screaming and crying. My wife is losing it from all the terrifying sounds," a local Iraqi man, whose house was hit, told AFP.

The attack took place two weeks ahead of the one-year anniversary of the assassination of Iranian general Qassem Soleimani, which was directed by Washington.

The US withdrew some staff from its Baghdad embassy earlier in December in expectation of reprisals.

"We are prepared to defend ourselves, our friends and partners in the region, and we're prepared to react if necessary," said General Kenneth McKenzie, head of US forces in the Middle East, speaking with journalists after the attack.

Sunday's attack was the third apparent violation of a truce agreed in October by Western and Iraqi authorities with hard-line and pro-Iran groups.

Several groups have unexpectedly condemned Sunday's attack, including the populist cleric and former militant leader Moqtada al-Sadr. Iraqi Shia paramilitary group Kataeb Hezbollah, which itself has been accused of carrying out previous attacks, said that "bombing the (US) embassy of evil at this time is considered out of order."

The Trump administration has accused Iran of being behind a recent spate of attacks on US interests in the country and has warned Baghdad that it will close its embassy unless Iraq can get the attacks under control.

In November, President Donald Trump announced a reduction of US troops in Iraq by January, before he leaves office.