Multiple rockets have reportedly landed at the Ain al-Asad air base in Iraq, according to security sources. It hosts US, coalition and Iraqi forces. 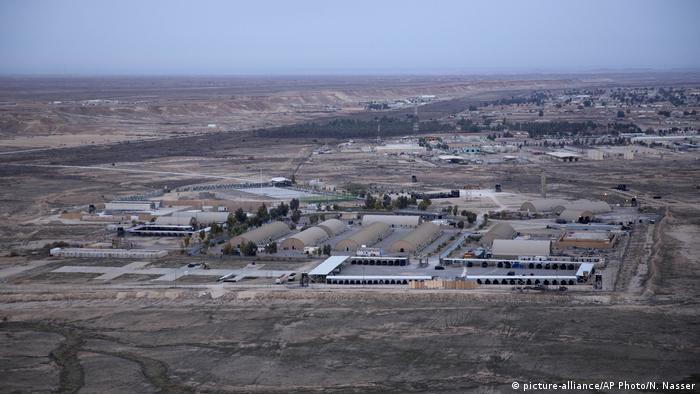 Numerous rockets were reported to have hit the Ain al-Asad air base in western Iraq on Wednesday.

There were no reports of injuries among US service personnel but an American civilian contractor died after suffering a "cardiac episode" while taking cover, a Pentagon statement said.

US and Iraqi forces are housed at the base in the western Anbar province, as well as troops from other members of the Operation Inherent Resolve coalition against the "Islamic State" (IS) group.

The US last week launched an airstrike in eastern Syria on facilities used by Iran-backed militia.

About 13 rockets were launched from a location some 8 kilometers (5 miles) from the base, a Baghdad Operations Command official told the Reuters news agency.

The rocket attack was the second in Iraq this month, coming two days before Pope Francis is due to visit the country.

A rocket attack on US-led forces in northern Iraq last month killed a civilian contractor and injured a US service member.

US considers next move

The US warned that the it may consider a military response appropriate to the attack.

"We are following that through right now," President Joe Biden told reporters. "Thank God, no one was killed by the rocket, but one individual, a contractor, died of a heart attack. But we're identifying who's responsible and we'll make judgments."

Meanwhile, the Pentagon also said the US would not hesitate to respond, should the White House deem it necessary.

"Let's do this the right way. Let's let our Iraqi partners investigate this, see what they learned," Pentagon spokesman John Kirby told a news briefing, describing the attack as a "troubling development."

"And then, if a response is warranted, I think we have shown clearly that we won't shy away from that. But we're just not there yet," Kirby added.

A history of attacks on bases

Tehran said the attacks, which caused injuries among US personnel, were in revenge for the assassination of General Qassem Soleimani, leader of the Islamic Republic's elite Quds force.

Rocket attacks were also carried out on other American targets in Iraq since then, including the US Embassy in Baghdad.

Two US soldiers and a British soldier werekilled last March at the Taji camp — the deadliest rocket attack in years on an Iraqi military base hosting foreign troops.

The US military is reported to have deployed Patriot air defense systems at the Ain al-Asad base, in western Anbar province, as a precaution against Iranian attacks.