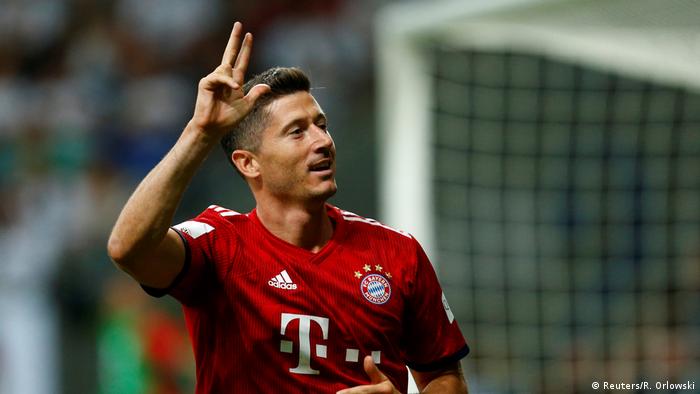 For much of the three months since Bayern lost to Frankfurt in the German Cup final, it looked as if they might have to consider life without Lewandowski. Sunday’s Super Cup final offered yet more evidence why that’s a scenario the club can’t countenance.

A fairly even opening spell was quickly forgotten as Lewandowski one again demonstrated the clinical nature that has made him so integral to Bayern’s success.

The first goal was an example of the simple execution of difficult skills that makes Bayern so formidable. The men in red stretched the play from left to right before Joshua Kimmich produced another sumptuous cross from deep; Lewandowski peeled off his man and arrowed a downward header past debutant goalkeeper Frederik Rönnow. 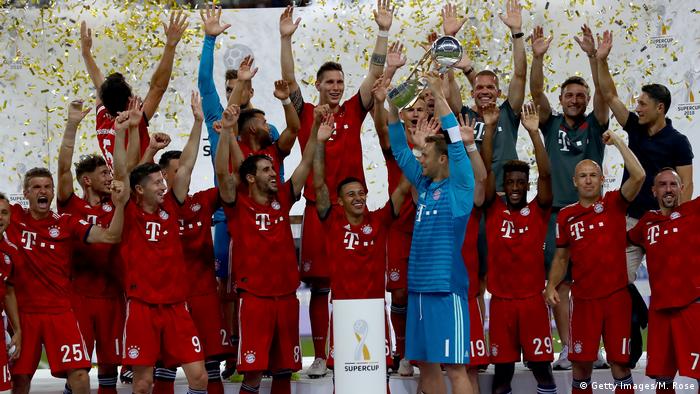 His second was simpler still. Rönnow came for a corner he got nowhere near while Carlos Salcido lost Lewandowksi and was made to pay.

The home side felt Mats Hummels should have paid a price of his own on the stroke of half time when he scythed down Mijat Gacinovic as he hared through on goal. Hummels was the last man and the foul was clear but the referee awarded just a penalty and a free kick, much to the displeasure of the home fans.

But worse was to come for the Eagles as Lewandowski completed his hat trick. Makoto Hasebe was caught on the ball and Franck Ribery and Thomas Müller combined quickly to work it to their spearhead. Lewandowski was slightly fortunate to ride the tackle but drove low under Ronnow to make it three.

The Danish keeper wasn’t enjoying his night and should perhaps have done better for the fourth. David Alaba’s driven low cross was well directed but Rönnow could only get fingertips on it and direct it in to the path of Kingsely Coman, and the substitute did the rest from close range.

There was just time for the final battle in the war that had raged between Lewandowski and Frankfurt center back David Abraham when the Argentinian threw an elbow in to his opponent. Like Hummels, he was lucky to escape with a booking, while Kovac immediately removed his striker from the firing line.

While Lewandowski’s removal was a choice, David Alaba’s substitution with 13 minutes remaining was the result of a hefty challenge from Danny da Costa and he limped gingerly down the tunnel.

Even down to 10 Bayern had more than enough, with Thiago sweeping home the fifth in the closing stages after some excellent work from Coman. The victory means Bayern are the first team to win three consecutive Super Cup titles and, on the evidence of Sunday night, it'd be foolish to back against them making it seven Bundesliga titles on the bounce this season.

FULL TIME - The referee takes pity on Frankfurt and blows for time. That was a thoroughly convincing display from Bayern. Our match report will be with you shortly.

88' - Wagner plays to the crowd, looking for a bit more noise, and then misses an absolute sitter. Kimmich gets to the byline, cuts it back and with the keeper out of the game, he somehow puts it wide from about 3 yards .Must be said that whole series of events was quite amusing.

85' - GOAL! It's five. Thiago sweeps home from 12 yards after some sensational work from Coman on the right.

80'-  The TV cameras show Alaba being helped down the tunnel. He's got quite the limp on. Worrying for Bayern fans that.

77' - Alaba is on the deck after being chopped down by da Costa. He's immediately taken off and a physio gets to work on his leg. Bayern have already used their three subs so are down to 10. Not that it really matters.

74' - Rebic gets involved for the first time. The Croatian drives through the middle and feeds his fellow substitute Blum. He tries to bend one round Neuer but doesn't get enough on it and it's a comfortable save.

72' - It's Lewandowski vs. Abraham part 3, or 4, or 5. The pair challenge for a high ball and Abraham throws an elbow at the striker. Plenty of players get involved in pusing and shoving and Abraham is booked. That could well have been red. Kovac decides that's enough for Lewandowski and brings on Wagner in his place.

69' - Ribery swerves inside and eventually finds Coman. He's got options but wastes the opportunity, dragging a cross/shot wide.

64' - A couple of subs now. Goretzka makes his debut for Müller while, for Frankfurt, Blum replaces Salcido and Rebic is on for de Guzman.

63' - GOAL! Alaba flies down the left and drills a low cross across the six yard box. Rönnow gets a hand to it, and should probably have done more, but Coman is there to adjust his feet and tap in at the back post.

62' - Haller jinks in to the box and is bundled down. Frankfurt want a penalty but the ref is having none of it.

58' - Lewandowski is up and hungry for more. He finds space 25 yards out and gets a decent strike away but it's straightforward for Ronnow.

57' - Lewandowski is on the ground after Hasebe slid his studs down the Pole's leg. But it'S Robben who comes off, Coman on in his place.

54' - GOAL! Probably best not to annoy Robert Lewandowski. Hasebe loses the ball and Robben and Müller shift it to Lewandowski. He gets slightly lucky with his first touch to beat the man then squeezes a shot underneath Ronnow. Hat trick to Lewandowski. Game over. Marker laid down.

53' - Lewandowski and Abraham have been clashing all night and there's another installment here. The pair made no effort to avoid each other in an off the ball incident. Not much in it but that one is simmering.

49' - Two smart saves from Ronnow in quick succession. First Müller gets a glance to a corner and the Dane pushes it out then he tips a powerful Robben drive round the post.

47' - It looks like Frankfurt have pushed Hasebe in to midfield and gone to 4 at the back.

HALF TIME: Boos ring out after that late decision. Bayern going down to 10 would have at least given Frankfurt some hope. As it stands, it'sa long way back for the Eagles, who've been second best throughout.

45+1 - Hummels escapes with a yellow. Very fortunate there, it was a cynical foul.

45' - Hummels could be in trouble here. Gacinovic raced on to a lovely layoff from Haller and the Germany defender slid to take the man out. He's the last man.

40' - The home side cleared that corner but they can't get it out of their own half at the minute, it's all Bayern.

38' - Müller and Kimmich combine well to find Lewandowski, whose snapshot is deflected behind. Frankfurt need to hang on here.

35' - Haller out-muscles Kimmich on Bayern's right and drives low across the box, but it's behind all his teammates. Then Müller takes a pot shot from range that flies a yard wide.

34' - Robben nods down a deep cross towards Lewandowski but Abraham gets in to clear.

29' - Big appeals from Bayern for a penalty. Fabian looks a bit lucky here, he tried to get the ball from behind Lewandowski and it was, at best, clumsy. Frankfurt rocking here. Still a fair while until the break.

26' - GOAL! It's two and it's that man Lewandowski again. Rönnow comes for the corner and gest nowhere near. To compound that, Salcido has lost Lewandowski and he nods in to an empty net.

25' - Bayern come again with several waves of attack. Müller fires a cross across goal and it'scleared for a corner.

21' - GOAL! Out of nowhere, Bayern lead. Simple as you like. Thiago started it by spreading the ball out to Kimmich on the right. The fullback looked up and saw Lewandowski peeling away and picked him out perfectly. The Polish hitman did the rest, planting a header low past the keeper.

18' - As in the cup final, Frankfurt are pressing Bayern furiously and it's upsetting the champions a little.

15' - Not much came from that corner either but that little spell of pressure should do Frankfurt good.

13' - Bayern suddenly snap in to the press and put de Guzman in trouble but the Frankfurt man does well to draw the foul. Down the other end, the hosts win a corner and go short before whipping it to the far post, where Alaba just flicks it out for another one.

10' - The visitors starting to dominate the ball now, as you'd expect.

6' - Thiago takes a nip at Fabian and Frankfurt have a freekick in a dangerous area. De Guzman lifts a decent ball in but Abraham can't control his header.

4' - Ribery gets away down the left and stands one up at the back post, bubt Willems beats Müller to the ball. Lewandowski was in a good position there, perhaps the wrong decision from RIbery.

3' - There's an early break in play as Gacinovic, who scored that brilliant runaway third in the cup final, goes down clutching his face. But he seems to be ok.

1'- And we're off. Frankfurt get us underway.

20:25 - The highlights from the cup final between these two sides last season have just come on my screen. What a game that was and what an ending! Ante Rebic was absolutely superb that night in Berlin. He's only on the bench tonight, after his World Cup exertions.

20:20 - Worth pointing out that this is Neuer's first competetive game for Bayern since September. He looked a little rusty at times in the World Cup.

20:15 - Hello! Football's back! After a painful post World Cup month with only friendlies, some lower division games and transfer rumors to keep us interested, the German Super Cup marks the return of the big boys.

And they don't come much bigger than Bayern Munich. The champions have won this trophy 11 times, including the last six, and have a new man in the hot seat. Niko Kovac masterminded Frankfurt's shock win over the Bavarians in last season's cup final but is now in the Bayern dugout.

He names about his strongest available side, with Arjen Robben and Franck Ribery still defying the years in the wide areas and Manuel Neuer back between the sticks. Leon Goretzka will have to wait for his Bayern debut, he only makes the bench.

Frankfurt have lost several of their star performers from last season, including goalkeeper Lukas Hradecky and the mercurial Kevin Prince-Boateng. As such, they hand debuts to keeper Frederik Rönnow and Real Madrid youth product Lucas Torro.