EU Commission President Jean-Claude Juncker told the European Parliament "time is running out" to secure a Brexit agreement. UK Prime Minister Boris Johnson remains confident he can get a deal by October 31. 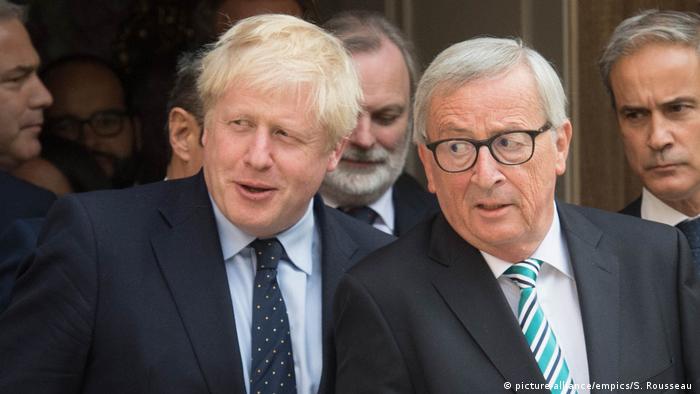 EU Commission President Jean-Claude Juncker announced during a debate in the European Parliament on Wednesday that he believed the risk of a no-deal Brexit was still "very real."

"Time is running out," he told the plenary debate on the topic of the UK's so-called divorce deal with the European Union.

Juncker also told the parliament, "A no-deal Brexit might be the choice of the UK, but it will never be ours."

At the end of the three-hour debate, European lawmakers in Strasbourg  voted 544 in favor and 126 against supporting another extension to the Brexit deadline should Britain request it. A further 38 members abstained.

Johnson remains optimistic that the UK will exit the EU on October 31 with a deal, but he has repeatedly vowed that Brexit will happen on this date even if no deal is agreed and despite a British law requiring him to request an extension of the Brexit deadline if no deal is agreed upon.

This comes on the same day that the head of the Federation of German Industries, Joachim Lang, announced that extending the deadline would cause German businesses "unnecessary expenditures." 'No emotional attachment' to the backstop

The main point of contention in negotiations remains the so-called Irish backstop. Johnson has rejected the policy, which was first proposed in the deal brokered with former-Prime Minister Theresa May, but EU negotiators say that he is yet to offer a viable replacement solution.

"I told Prime Minister Johnson that I have no emotional attachment to the backstop," Juncker told the European Parliament. "But I made clear that I do have an intimate connection to its commitments. I have asked the prime minister to make, in writing, alternatives."

Read more: Ireland doubts Johnson can do a deal with the EU

The EU's chief Brexit negotiator, Michel Barnier, said, "We need legally operational solutions. It is not enough to explain to us why the backstop should be removed."

"Some three years after the British referendum, it's not a question of pretending to negotiate," Barnier explained to European lawmakers.

Brexit Party leader and prominent hard Brexit campaigner Nigel Farage said during the debate that Barnier was "keeping us trapped inside, this was the objective of Barnier's from the start." 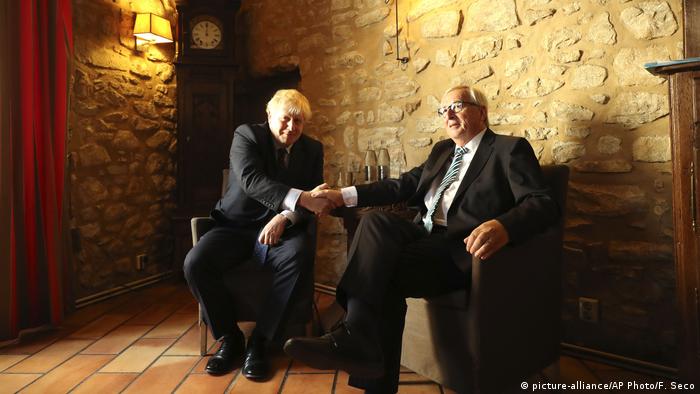 Juncker and Johnson met in a restaurant in Luxembourg on Monday

During Wednesday's debate, frustrations rose among EU lawmakers who said they were growing tired waiting for concrete proposals from Westminster.

German lawmaker Manfred Weber, leader of the center-right EPP group in the European Parliament, described Brexit as "stupid" and vented his annoyance at the ongoing suspension of the UK Parliament.

"Brexiteers claimed Westminster would take back control, but now they shut it down," he said during the debate.

The UK Supreme Court is due to decide in the coming days whether Johnson's decision to prorogue parliament was illegal.

After Wednesday's debate, the European Parliament is set to adopt a resolution outlining its concerns about the UK's impending exit, still scheduled for October 31.