Prime Minister Boris Johnson has expelled many of his own MPs, while parliament has legislated to force him to delay Brexit. Will he obey the law? Conflict Zone meets one of his pro-Brexit MPs, Andrew Bridgen.

Like its parliament and lawmakers, Britain is deeply divided over Brexit and no one knows what is going to happen next.

The governing Conservatives are split too and have no effective majority. In recent days, 21 MPs, including senior figures and former ministers, were expelled from the party for defying the whip over a key vote.

Options are running out for Prime Minister Boris Johnson and his allies as October 31 – the current deadline to leave the European Union – fast approaches. Parliament has rejected his attempts to force an election and instead legislated to force Johnson to ask the EU for a three-month extension to avoid a 'no-deal' Brexit; the prime minister has said he would rather be "dead in a ditch" than delay Britain's departure from the bloc.

But MPs have had several opportunities to leave the EU: they voted three times on former leader Theresa May's deal and roundly rejected it on each occasion. Given that the EU says this is the only deal on offer, some form of it might yet be resurrected again.

On DW's Conflict Zone this week, Conservative MP Andrew Bridgen told host Tim Sebastian that "whatever happens, I am not signing [May's] withdrawal agreement. I will not betray my country or my electorate."

Boris Johnson himself, as well as members of his government, such as Dominic Raab and Jacob Rees-Mogg, also known as hard-liners on Brexit, voted for the deal only a few months ago. Why was it so terrible now?

"I think they were looking at the lesser of evils, I think they could see that Brexit was slipping away, potentially," said Bridgen. "Obviously with hindsight, [Johnson and Rees-Mogg] will have regretted voting for the withdrawal agreement."

Under Johnson, discipline in the Conservative Party has continued to be a problem.

Bridgen said he had voted against the government many times as a backbencher, including three times against May's deal, but drew a distinction between his disloyalty and that of his 21 recently-ousted colleagues: "I voted against specific policies. What the rebels last week did was they voted to take away the government's ability to legislate and hand it to the opposition and they were warned prior to that vote that if they did so they would lose the whip."

The government also lost key personnel when Amber Rudd, a senior minister who had opposed Boris Johnson’s leadership campaign but later joined his cabinet, resigned from her post citing the administration's failure to work towards a new deal with the EU. She said that most of its focus had been on preparing for a no-deal Brexit. 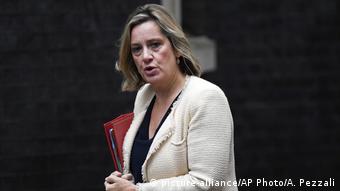 In a referendum debate in 2016, Amber Rudd described Boris Johnson as the "life and soul of the party but not the man you want driving you home at the end of the evening"

Bridgen said that Rudd's position on the EU and the negotiations were "well known" and lamented that more planning for no deal had not been done before. "The more the government prepared for no deal and publicly let that be known, the less likely we're ever going to need it."

Of the government's efforts to find a deal with the EU, which Johnson says he wants, a major obstacle has been resolving the question over the future of the Irish border – the UK's only land border with the EU. Bridgen said the issue had become "conflated" and a "stick with which to beat the UK government."

But new proposals to resolve the impasse had been promised by Johnson, so where were they? 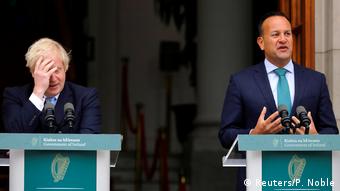 "Well I think they're already out there. Alternative arrangements have been discussed for over 12 months," said Bridgen.

Letter of the law

With no election forthcoming, no new deal on offer and few other options, Boris Johnson is digging his heels in over his position not to change the Brexit deadline.

Bridgen said he would not suggest that Johnson break the law and that it would "set a very dangerous precedent," but that the legislation to delay should be "tested in court."

If the Supreme Court instructs him to obey the law then the prime minister should, said Bridgen, but there were "other ways around it," including the possibility of writing contradictory letters to Brussels.

Scotland's highest court of appeal ruled that British PM Boris Johnson's decision to prorogue Parliament was unlawful. But the court did not call for the suspension to be repealed. (11.09.2019)

Britain could face massive disruptions to its food supply, financial services and cross-channel traffic in the event of a no-deal Brexit, according to government projections. And public disorder is likely to follow. (11.09.2019)

Quadriga - Brexit: The End of the Road for Johnson?