After years of stable prices, doner kebabs, one of Germany's favorite fast-foods, are becoming more expensive in the German capital. 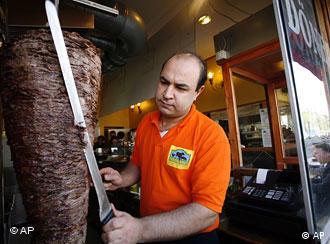 Higher energy costs and wholesale prices for the meat and other ingredients are mostly to blame for the increase in prices nationwide.

"We expect the 3 euro ($4.40) mark to be surpassed in the next year," Tarkan Tasyumruk, a spokesman for the union of Turkish doner producers in Europe, told the dpa news agency.

In other large German cities the grilled meat is already being sold for 3.30 euros or even 3.50 euros. But in the capital kebab prices still hover at 2.50 euros at many stands, sometimes even less, and only in isolated cases do they reach 3 euros.

The competition among as many as 1,600 doner retailers in Berlin is bigger than in other German cities and that causes prices to rise, Tasyumruk said. Demand for the popular Turkish fast-food has hardly wavered in his opinion, "It is a stable market."

The market seems to have regained its stability after the dent caused by the spoiled meat scandal one year ago, when a producer in Itzenhoe sold around 100 tons of doner made from substandard meat between December 2006 and September 2007.

Germany is Europe's biggest doner exporter and the annual turnover of the sector, which has around 45,000 workers nationwide, is estimated at 2.3 billion euros. But there are no statistics available for the number of kebabs sold in Germany.

The Berlin doner producer Remzi Kaplan said in Germany around 700 tons of doner meat is produced daily. Kaplan said 2.50 euros is the minimum cost at which a good quality doner kebab with salad and sauce can be sold, with some profit left over.

Around 150 tons of spoilt meat was shipped from the southern German state of Bavaria to Berlin companies making Turkish-style döner kebab skewers and then distributed across Germany, prosecutors said Friday. (31.08.2007)

Stories of rancid meat in the past few weeks have given the Döner, Germany's favorite fast food, a bad name. With the motto "fairness for the Döner" producers are doing their best to restore their image. (21.09.2006)

Stabilizing food prices across Europe needs to be a top priority, Europe's agriculture ministers agree. The hard part will be deciding how to best reform the system. (20.05.2008)