Around 150 tons of spoilt meat was shipped from the southern German state of Bavaria to Berlin companies making Turkish-style döner kebab skewers and then distributed across Germany, prosecutors said Friday. 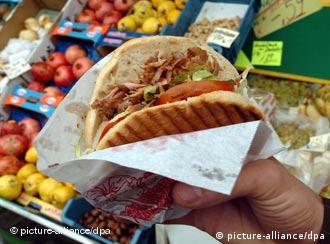 The amount of rotten meat delivered to food stores and fast food joints around Germany is much larger than previously thought, German authorities confirmed Friday, 31 August 2007.

Investigators said that between 140 to 160 tons of tainted meat from Bavaria had been supplied since June, 2006 to various food companies in Berlin. Until now, authorities were talking of a meat scandal involving around 31 tons of the decayed stuff.

The meat, which was deemed "unfit" for human consumption, came from a Bavarian company and ended up at fast-food stands across eight states after being processed in Berlin. The scandal came to light after a tip-off by a lorry driver to the police.

Federal Food, Agriculture and Consumer Protection Minister Horst Seehofer said in the Bavarian capital of Munich that the EU authorities had been informed, as there appeared to be a European dimension to the fraud. 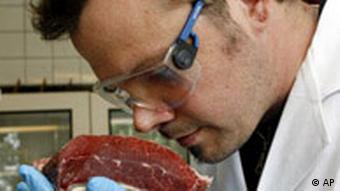 Smell okay? A researcher sniffs a piece of beef at a laboratory in Offenburg

The minister called for a rigorous crackdown and stiff punishments for all concerned. The scandal in Bavaria, Seehofer's political base, demonstrated the "criminal energy" being deployed to circumvent consumer protection laws, he said.

There have been calls for meat labeled "unfit" to be sprayed with dye in future to prevent it being relabeled and sold on. German politicians are demanding action at European Union level.

There have been repeated meat scandals in Germany over the years.
In February, tons of spoilt meat was found in a refrigerating plant in the southwestern town of Illertissen. It had come from Italy and was destined for France and Russia.

Last year, a company in the city of Passau, near Bavaria's border with Austria, was reported to have sold 140 tons of spoilt meat under false labels. In some cases, sell-by dates had been exceeded by four years.

The country was hit by another major meat scandal in 2005.

Rotten Meat Retailers to Be Exposed?

Germany's upper house of parliament has passed a law aimed to improve protections for consumers. Names of companies involved in recent rotten meat scandals, for instance, could be made public. (22.09.2006)

The spoiled meat found in the current scandal plaguing the German meat industry is just "the tip of the iceberg," according to the The Federation of German Food and Drink Industries. (16.09.2006)

Germany has been hit by a further rotten meat scandal. A new federal consumer information law intends to help weed out the bad apples. But can stricter controls solve the problem? (13.09.2006)