The scandal surrounding Bo Xilai revealed a number of problems in China's Communist Party. Now, more than a year after the allegations against him were exposed, the disgraced politician has been indicted. 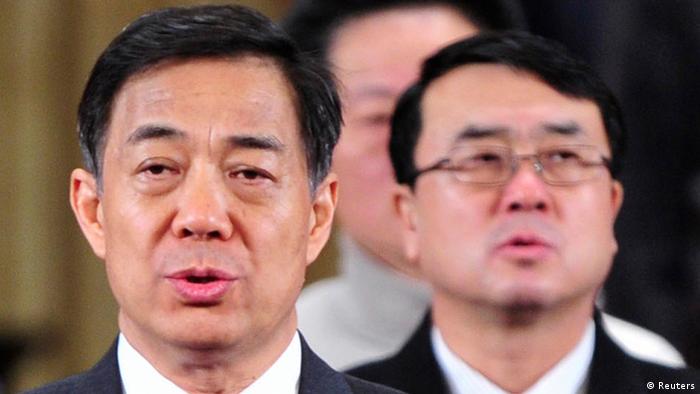 Power and the abuse thereof; moral and the lack of it; murder and money - the story surrounding Bo Xilai is enough for a full length thriller - a thriller that has gripped the Chinese public since last year. Bo Xilai created chaos in China's carefully planned change of leadership. At the same time, he also brought to light uncomfortable truths about the country's leaders.

More than a year after the allegations against him were exposed, the former high-flying communist politician was indicted on Thursday, July 25th, according to China's Xinhua News Agency. "The indictment paper was delivered" to a court in Jinan in the eastern province of Shandong, Xinhua said, citing prosecutors in the city. He was charged with bribery, abuse of power and corruption.

Bo "took advantage of his position to seek profits for others and accepted an 'extremely large amount' of money and properties," Xinhua added, quoting the indictment. The move paves the way for a trial seen by many as a test for legal reform and President Xi Jinping's commitment to combat corruption. The report did not offer a date for the trial.

Bo, the former party chief of the southwestern city of Chongqing, was expelled from the Communist Party over allegations leveled against him last September and has not been seen in public for over a year.

Through the scandal, a number of things became clear. For one, there is a deep-seated ideological divide among the members of the Communist Party, which to the public presents itself as a homogenous, unified entity. Another thing that became apparent is that the top tiers live in astonishing luxury. They are involved in offshore banking and money laundering and will literally go over dead bodies if they have to, as Bo Xilai's wife Gu Kailai has proven.

Bo Xilai, as the son of legendary party revolutionary Bo Yibo, was one of the so-called "princelings." The children of the party's elite go to expensive schools, enjoy other privileges and, thanks to their excellent contacts, make up their own faction within the Communist Party. As party head of China's largest city, Chongqing, with over 30 million residents, Bo had a good chance of being promoted into the nine-member Politburo Standing Committee - the party's inner circle of power.

Normally Chinese politicians rise through the ranks quietly. Not Bo. The urbane and charismatic man started a populist campaign to make Chongqing his model city. He invested in low-income housing and attracted foreign investment.

But there are two campaigns for which he will be especially remembered: "sing red" and "strike black." Bo revived the ideals of the revolution by having songs from Mao's era sung in parks. "Strike black" referred to his crack-down on organized crime. Around 5,000 people were arrested in his ruthless campaign. A number of people were sentenced to death. The campaign attracted attention from the party elite. Five of the nine members of the Politburo Standing Committee travelled to Chongqing to visit him.

China's new party chief, Xi Jinping, also a "princeling" himself, travelled to Chongqing in December of 2010. Xi praised Bo's crackdown on crime, calling it an "outstanding accomplishment." But Bo didn't even attempt to make the impression that he was going by the rule of law. His Maoist campaign made Bo the most prominent representative of the so-called "new left." The new leftists wanted to solve China's societal problems such as the growing disparities between the rich and poor and rampant corruption by giving the state more control.

On the other side of the spectrum were more liberal forces, like former Prime Minister Wen Jiabao. This group wanted to eradicate the country's problems through reform. They wanted less state and a stronger rule of law. No surprise, then, that Wen Jiabao did not visit Bo in Chongqing.

Bo had storybook career. That is, until his police chief Wang Lijun turned up around 300 kilometers away at the American consulate in the city Chengdu dressed as an old woman on February 6.

The top policeman got into trouble with his ex-boss when he confronted Bo with evidence that his wife was involved in the murder of the British businessman Neil Heywood. Bo became furious and fired Wang on February 2. Wang apparently feared for his life, and felt the US consulate was the only safe place for him.

His escape to the American consulate turned the incident into an international affair which could no longer be concealed. But the Americans usually try to stay out of China's domestic issues. Wang stayed at the consulate for around 36 hours before turning himself over to Chinese authorities. Then he disappeared for months.

At the beginning of March 2012, the People's National Congress convened. Bo Xilai was allowed to speak at a press conference. It was not until the closing press conference that Prime Minister Wen Jiabao spoke about the incident. Wen was unusually direct when he criticized Bo Xilai and his "Chongqing model." He warned of the return of "conditions during the Cultural Revolution" and expressed the importance of continuing and expanding political reform. Just a day later, Bo was arrested.

In August, Gu Kailai, Bo Xilai's wife, received a suspended death sentence for the murder of Neil Heywood from a court in the southern Chinese city of Hefei. Usually, such sentences are commuted to life sentences. The trial only lasted seven hours and it seemed to have covered more up than it clarified; there was talk of a "business dispute," but no details were mentioned.

Rumor has it that Heywood had helped the Bo family transfer money to offshore accounts - money laundering is the only logical explanation for the luxurious lifestyles the elite politicians have. But Bo is not alone there - a number of other high-ranking officials have assets outside of China and send their children to study at elite foreign universities.

At the end of September, Wang Lijun went to trial for defection, abuse of power and corruption. He was sentenced to 15 years in prison. The fate of 63-year-old Bo Xilai was not played out in the press, but instead, taken care of behind closed doors. At the end of October, Bo was expelled from the legislature. Up to that point, he had received immunity from criminal persecution.

The man who revealed China's largest political scandal in decades, former police chief Wang Lijun's two-day trial has come to a close, with party cadres hoping the conspiracy will be swept under the rug with the verdict. (19.09.2012)