Turkish border forces have killed five Syrian asylum-seekers in the past two months, says Human Rights Watch. The rights group called on the Turkish government to investigate the excessive use of force by its troops. 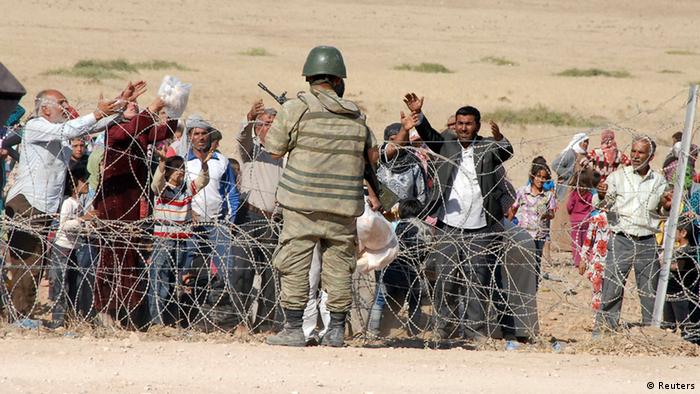 Human Rights Watch (HRW) said Tuesday that Turkish border guards had been involved in beating and killing five Syrians who were trying to cross into Turkey from the war-ravaged country.

The New York-based rights advocacy group said in a report that five asylum-seekers – including a child – were killed and 14 others wounded in March and April as a result of the border guards' excessive use of force.

HRW said its findings were based on interviews with victims, eye witnesses and Syrian locals. The rights organization also released a video purporting to show the victims of the alleged beatings and shootings.

A Turkish Interior Ministry official denied the HRW claims, insisting the country, which hosts some 2.7 million Syrian refugees, does not treat the asylum-seekers badly.

More Syrians are trying to flee the country and seek refuge in neighboring Turkey as fighting in Syria's largest city Aleppo has intensified in the past few weeks.

Rights groups claim that Turkey is now allowing only a limited number of Syrians to enter the country. Ankara denies it and says it keeps an "open door" policy for those fleeing the five-year-long conflict.

HRW says it recognizes Turkey's right to protect its border, particularly along the town of Kilis which has come under increased rocked attacks by "Islamic State" group, but says Ankara must respect international laws on the use of lethal force and the right to life.

HRW researcher Simpson also criticized a refugee agreement between Turkey and the European Union to send back migrants and asylum-seekers from Greece to Turkey.

"EU officials should recognize that their red light for refugees to enter the EU gives Turkey a green light to close its border, exacting a heavy price on war-ravaged asylum seekers with nowhere else to go," argued Simpson.