Right-winger Wilders on trial in Netherlands - hate speech, or policy proposal? | Europe| News and current affairs from around the continent | DW | 18.03.2016

The leader of the right-wing anti-immigration Freedom Party, Geert Wilders, faces trial for 2014 election campaign comments about Moroccans. Meanwhile, his party leads the polls with elections due within a year. 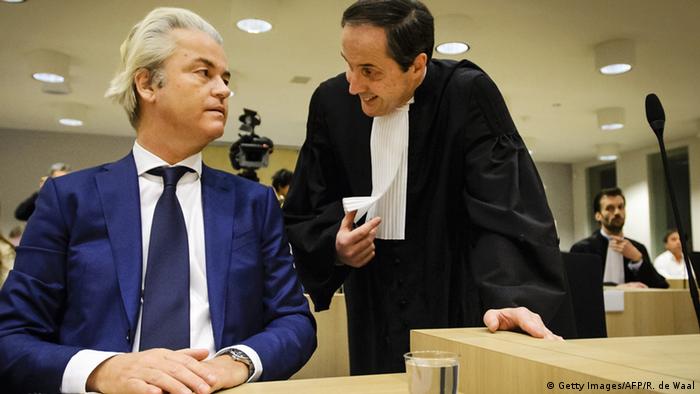 Geert Wilders remained bullish on Friday, heading to court to face speech-related charges for the second time in his political career.

The charges date back to the 2014 European election campaign, in which he repeatedly called for "fewer Moroccans" in the Netherlands. At one rally, he asked supporters if they wanted more or fewer, prompting chants of "Fewer! Fewer!"

Wilders smiled, and responded: "We'll take care of that."

The prosecution argues that this constitutes hate speech, saying that this case against Wilders is stronger than a previous one, in which his comments pertained to the religion of Islam, not a specific group of people.

"Freedom of speech is not absolute - it is paired with obligations and responsibilities," lead prosecutor Wouter Bos said at the court in Schipol, near Amsterdam, on Friday, including "the responsibility not to set groups of people against each other."

Koen Vossen, a lecturer for the political science department at the University of Nijmegen, believes that Wilders will still offer a robust defense to the charges he faces. 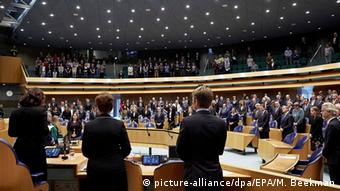 At least based on the opinion polls, coalition building could soon become tricky in The Hague

"The way Wilders has formulated his remarks is ambiguous; you can explain them in different ways," Vossen says. "He says himself that by asking for 'fewer Moroccans,' he meant something different."

According to Vossen, Wilders is effectively arguing that he was making a policy pledge. Take his proposals to send criminals with dual nationality back to their home countries, plus reduced migration from Islamic countries, and the upshot for the Netherlands would be fewer Moroccans.

"So he says he was merely making an argument that would be the empirical consequence of his policy proposals," Vossen says.

Treading this fine linguistic line is something of a trademark of Wilders' politics. With his Freedom Party (PVV) currently leading the polls in the Netherlands, and elections due within the year, the 52-year-old also said recently that if his party were excluded from the next ruling coalition, then his supporters would not tolerate this and might revolt.

"So then, if people attack him, saying he's calling for revolution, he replies: 'No, listen to what I said. I don't want there to be a revolt. I said that it might happen if people exclude me from the coalition,'" Vossen explains. "He is very good at this: always making remarks that are very controversial, evoking lots of anger, discussion and media attention; but at the same time, it's always possible to defend them. That's what he's doing now, in court, and I think that it will be really difficult to convict him."

Trials against far-right politicians have been increasingly common in recent years. Wilders is facing his second; in France, Jean-Marie and Marine Le Pen have both fought prosecution; while Germany is again trying to outlaw the far-right NPD, after a failed attempt between 2001 and 2003. Convictions, however, remain considerably rarer. 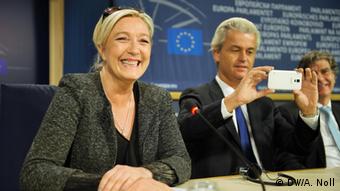 Wilders, who shied away from Marine Le Pen's father Jean-Marie as too right-wing, is now forging closer ties

"You can better argue with these people in parliament or in newspapers - but not in court," Vossen says, albeit stressing that he understands the roots of Germany's postwar principle of "streitbare Demokratie" - namely, a democracy with a right to actively defend itself against extremism. "The danger is that these trials offer another platform for the politicians, and also they give some credibility to their claims that they are martyrs, that freedom of speech doesn't apply to them."

Certainly, the trial has not yet hurt Wilders' approval ratings - with his PVV party polling 10 points clear of any other political grouping in the country.

Conservative Prime Minister Marc Rutte, currently in a grand coalition with historical rivals the Social Democrats, has until March 2017 to call elections; Vossen believes the established parties will wait as long as possible, hoping for a change in the political wind. "The refugee crisis was extremely inconvenient for the government," he notes, saying Wilders has moved his rhetoric further to the right in recent months, not unlike Germany's AfD.

In terms of where the PVV is getting its support from, Vossen again sees key similarities to UKIP in Britain, the Front National in France, and Germany's AfD.

The voters stem "from all walks of life," he says, but "some groups are over-represented: notably less-educated, working-, lower-middle- and middle-class men." Many of them live in what the Dutch call "sleeping towns," suburban commuter settlements that have sprung up and grown swiftly around major population centers, like Almere near Amsterdam or Zoetermeer near The Hague. In such regions, the PVV can often hope for 40 percent of the vote and more, at least according to current polls.

"The other stronghold is the periphery of the country," Vossen says. "Very small towns in provinces like Limburg, for example, the kind of places where you will not find any Muslims."

Dutch politician Geert Wilders has helped launch an anti-Islam political party in Australia. The new party is based on Wilders's right-wing Party for Freedom (PVV) in the Netherlands. (21.10.2015)

Dresden is bracing itself for a high turnout for the next PEGIDA rally, where outspoken anti-immigration Dutch populist, Geert Wilders, is to make an appearance. Opponents say the invitation crossed a "red line." (13.04.2015)