Lawmaker Geert Wilders is to face prosecution for inciting racial hatred after a speech calling for "fewer Moroccans" in the Netherlands. Wilders has said he stands by his comments. 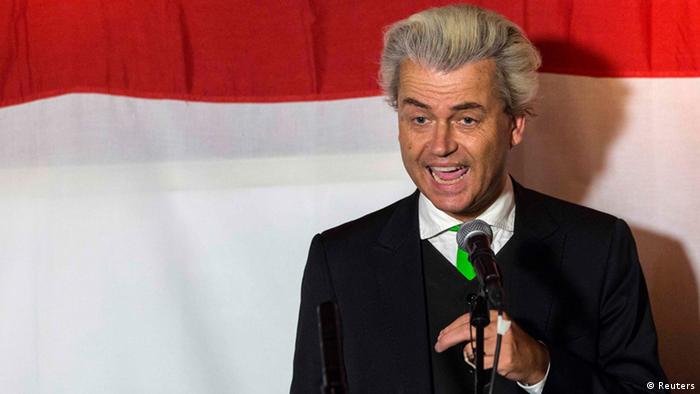 The public prosecutor in The Hague will begin legal proceedings against the far-right politician Geert Wilders "on charges of insulting a group of people based on race and incitement to discrimination and hatred," prosecutors announced Thursday. No date has yet been set for the trial.

The charges are based on remarks made by Wilders on March 19 at a rally during local elections.

He asked his followers whether they wanted "fewer or more Moroccans in your city and in the Netherlands?"

To shouts of "Fewer! Fewer!" from the crowd, Wilders told them "We'll take care of that."

The incident led to 6,400 legal complaints being lodged against Wilders. Criticism was even voiced within his own Party for Freedom (PVV), which is leading opinion polls in the Netherlands and is currently the country's fourth largest political party.

"Politicians may go far in their statements, that's part of freedom of expression, but this freedom is limited by the prohibition of discrimination," a prosecution statement said.

In a statement to the charges earlier this month, Wilders said that he did not retract any of his comments. "In my fight for freedom and against the Islamicisation of the Netherlands, I will never let anyone silence me. No matter the cost, no matter by whom, whatever the consequences may be," he said.

Wilder's anti-Islam rhetoric has got him into trouble before. In the past, the politician has compared the Koran to Hitler's "Mein Kampf" and described Islam as a fascist religion.

Prosecutors lost a similar case against Wilders in 2011, when he was aquitted on hate-speech charges. The court ruled that he had targeted a religion, which is permitted under Dutch freedom of speech laws, rather than a specific ethnic group.

Aims to reduce carbon emissions have sparked an innovative boom in The Netherlands. It starts with glow-in-the-dark, solar powered, heated cycle lanes, and may go anywhere. Suzanna Koster, Eindhoven. (21.11.2014)

Jean-Marie is the old figurehead, daughter Marine is celebrated by Russians, and niece Marion rises to the leadership. Front National is becoming a family business as party's conference enjoys the limelight in Lyon. (30.11.2014)