Le Pen basks in attention at Front National conference | Europe | News and current affairs from around the continent | DW | 30.11.2014

Jean-Marie is the old figurehead, daughter Marine is celebrated by Russians, and niece Marion rises to the leadership. Front National is becoming a family business as party's conference enjoys the limelight in Lyon. 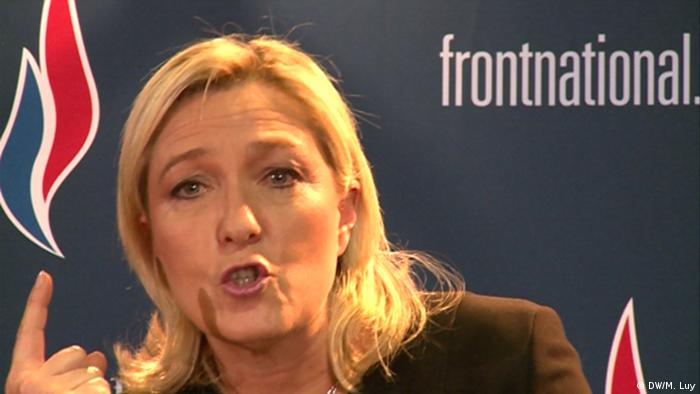 The officials wear black suits with ties, the stage in the Lyon conference center is blue and decorated with the Front National's (FN) flame symbol. Everything seems discreet, even bourgeois.

That it is true of most of the delegates: smart young men and women you might find in any mainstream political party in the country. At the two-day conference, set to last through Sunday (30.11.2014), the far-right nationalist party is expected, among other things, to elect a new central committee.

The style and the appearance of the functionaries are intentionally in tune with the modernization course set by FN leader Marine Le Pen. She is to be reelected in Lyon, and the only question is the extent of the approval she will claim, since she is the only candidate.

And yet, one of Le Pen's inner circle within the party has already suffered a defeat: Deputy party leader Florian Philippot dropped to fourth place in the central committee's election. The ambitious advisor to Marine Le Pen, who stands for economic conservatism, was apparently too intellectual and metropolitan for the traditional party faithful. 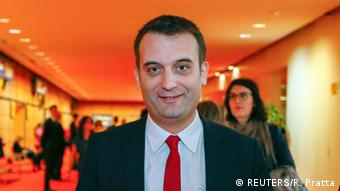 But the smooth, professional facade at the party conference hides rifts within the Le Pen clan. Jean-Marie's favorite grand-daughter Marion, the 26-year-old parliamentarian, swiftly moved in to occupy the position of deputy party leader after Philippot's place became available. She stands for a particularly nationalist course, but despite differing opinions on how radical the FN should be, party leadership remains a family affair.

Marine Le Pen has also been able to diffuse the media profile of her 86-year-old father and FN founder, Jean-Marie. Though his recent racist and anti-Semitic statements attracted some scandal - perhaps to deliberately undermine the moderate course charted by his daughter - he appeared in Lyon as a benevolent family father: "Marine will become president in 2017," he declared. "Long live the Front, long live France, long live Marine!"

With that, it seemed the hatchet had been buried, and he has now confined himself to his wonted sentiments: providing memories of France's glorious past and delivering anger against immigrants, Muslims, and other traitors of the fatherland. Jean-Marie Le Pen is there to provide succor to the party's nostalgia faction - its old hardcore from the days of its founding.

The press also got a notably easier ride: Marine Le Pen, usually not above serving critical interviewers the odd sarcastic remark, used her lunch break to bathe in two hours of media attention, answering every question, including those touching on the huge loan from Russia that helped to fund the event.

"We were the only movement in France unable to get a loan from a bank in France or anywhere in Europe," she remarked. "It looks as though they tried to stop us taking part in political life." She went on to promise that if she did ever get any money from another source, including from the United States, the FN would pay Putin the money back.

Not that she sees a problem with accepting a loan from the Kremlin. She said the party had received nine million euros ($11.2 million), and not the 40 million reported by the international media. In any case, the fact that the Kremlin had paid for the Lyon sausage and champagne on offer at the lunch buffet did not seem to spoil anyone's appetite. 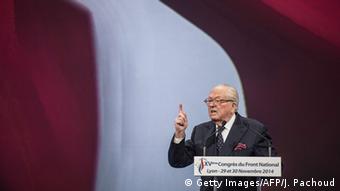 Le Pen admires Putin, often praising him for his "fight against the oligarchs." She also repeated her criticism of the French government for failing to deliver the Mistral warship it had promised to sell to Russia "just because President Obama came knocking." And she insists that the Russian economy, with its state-run companies, makes a good role model for France.

Not least because of her good relations with Moscow, where Le Pen and one of her close advisors have been guests on several occasions, one of the honorary guests at the FN conference was the deputy chairman of the Russian Duma, Andrei Isayev. He drank a toast to France and emphasized the good relations between the Front National and Moscow.

The Russian representative was followed by far-right Dutch politician Geert Wilders and Heinz-Christian Stracher, head of the Austrian People's Party, who also hailed Marine Le Pen as a future French president. Le Pen was clearly using the conference to demonstrate where she sees her political friends in what she likes to call the "Europe of fatherlands."

The conference served as a kind of early warm-up for the 2017 election campaign. And if she were to face Nicolas Sarkozy as the candidate for the leader of the conservatives, she claimed - utterly free of modesty - that she would win.

France's divided conservative UMP party has picked ex-president Nicholas Sarkozy to be its leader but with less votes than anticipated. Sarkozy is reputed to be aiming for France's 2017 presidential election. (29.11.2014)

Many right-wing European political parties are anything but shy when it comes to showing their pro-Russian sentiments. Millions of euros have also been deposited by Russian banks in the pocket of France's Front National. (29.11.2014)

Members of France's center-right UMP are choosing a new leader - and former President Nicolas Sarkozy seems a strong candidate. A power struggle within his party after his departure opened the door for a comeback. (29.11.2014)