Dresden is bracing itself for a high turnout for the next PEGIDA rally, where outspoken anti-immigration Dutch populist, Geert Wilders, is to make an appearance. Opponents say the invitation crossed a "red line." 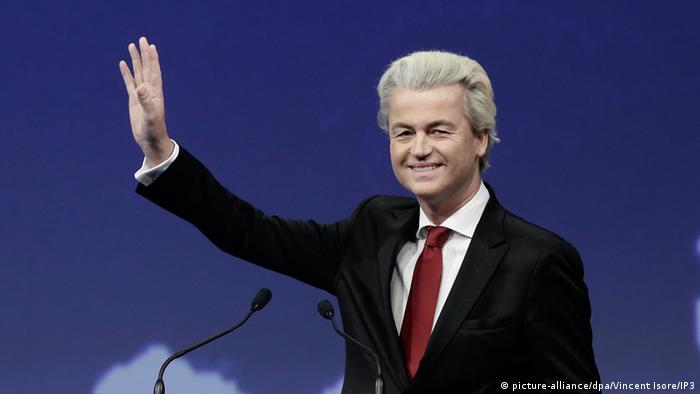 Officials in the eastern German city expected up to 30,000 people to turn out for mass rallies on Monday.

Although PEGIDA, whose names translates to "Patriotic Europeans Against the Islamization of the Occident [or West]," has seen dwindling support at its weekly demonstrations, Wilders' scheduled speech was expected to lure in large numbers of both supporters and opponents.

"We won't tolerate xenophobic or racist [comments] by speakers," Premier Stanislaw Tillich told news agency DPA, vowing that the city would "take definitive action against organizers" in such a case.

The city's police force was expected to launch a large-scale operation in order to maintain the peace.

At its height in early January, PEGIDA drew some 25,000 supporters. Its popularity has since waned, compounded with a major political setback when the German media stumbled upon "Hitler selfies" posted by founder Lutz Bachmann. In February, however, the group reinstated him as director. 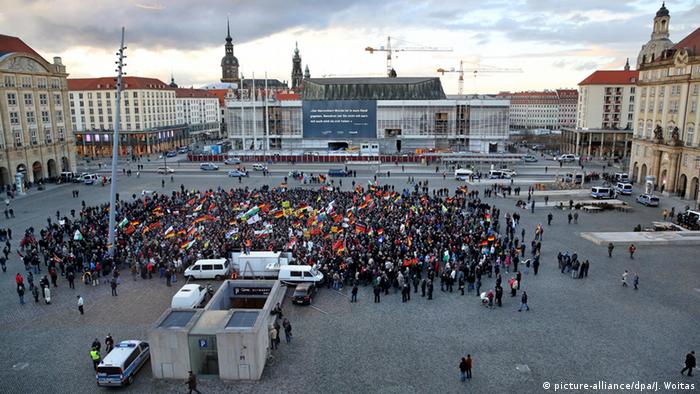 The face of the anti-Islam movement

Although his far-right Party for Freedom (PVV) maintains only 12 seats in the 150-seat lower house of parliament and additionally sustained a surprising loss in last May's EU elections - dropping from 17 down to 12 percent of the vote - Geert Wilders still represents for many the face of anti-Islamic sentiment in western Europe. 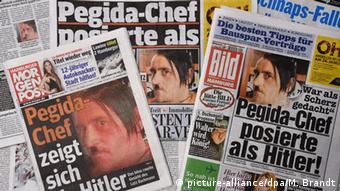 Wilders said, 'We all make mistakes,' when asked about Bachmann's big day on the German front pages

The far-right politician currently faces prosecution over controversial remarks made during local elections in March 2013, where he asked supporters whether they wanted "fewer or more Moroccans" in the Netherlands.

To the shouts of "Fewer! Fewer!" from the crowd, Wilders told them "We'll take care of that."

Wilders has previously called Islam a "sick ideology." He has also compared the Koran with Adolf Hilter's work, "Mein Kampf."

Numerous opposition groups announced counter-demonstrations, which were scheduled to begin around 2:30 p.m. local time (1230 UTC), nearly three hours ahead of the PEGIDA rally in a bid to block supporters from reaching the venue.

"We believe they want Dresden to be sort of the center of their movement. So we want to get in right from the start, when they kick off with Wilders," Nazi-free Dresden spokesperson Silvio Lang said. 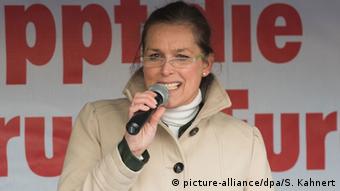 PEGIDA has nominated its own mayoral candidate, Tatjana Festerling, for Dresden's June elections

The Greens federal committee is to be in attendance in Dresden on Monday. Speaking to German radio Deutschlandfunk, Greens party co-chair Cem Özdemir called for more politicians at the national level to speak out against PEGIDA in line with Chancellor Angela Merkel's message that Islam now belonged to German culture.

Taking aim at Merkel's fellow Christian Democratic Union (CDU) party members who haven't clearly distanced themselves from anti-immigration sentiment, he said: "These people who are with PEGIDA aren't CDU [or] CSU, they are clearly right of that."

Record immigration figures in Germany have driven a noticeable increase in anti-foreigner sentiment. Tensions in local communities over making room for asylum seekers have also raised concerns about xenophobia.

At the beginning of the month, a housing complex for incoming refugees was set on fire in the town of Tröglitz, which lies roughly 150 kilometers (93 miles) west of Dresden.

The right-wing PEGIDA organization has officially named its candidate to contest to be mayor of Dresden in June elections. A former member of the euroskeptic AfD party, Tatjana Festerling, will take up the charge. (06.04.2015)