Right Livelihood Awards go to rights activists from Belarus, Nicaragua, the US and Iran | Germany | News and in-depth reporting from Berlin and beyond | DW | 01.10.2020 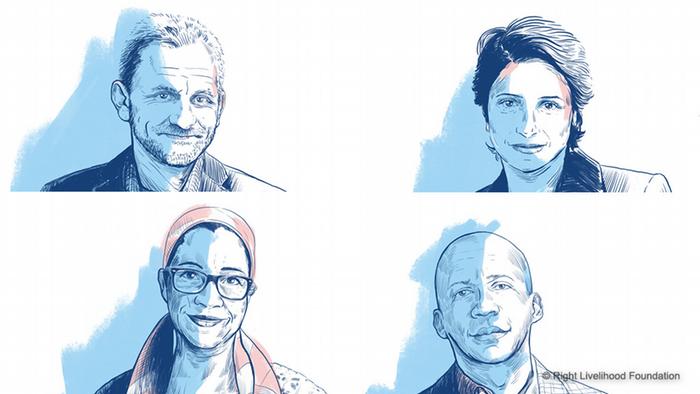 Sviatlana Tsikhanouskaya, Maria Kolesnikova and Veronika Tsepkalo might well be prominent faces of the opposition in Belarus today. But doubtless Ales Bialiatski is the man who's been giving President Alexander Lukashenko sleepless nights for decades, whose eagle eye spots any abuse and who surely helped inspire the three women now pushing Lukashenko to the brink.

The 58-year-old human rights activist has fought for human rights and freedom in Belarus for half his life, but he struggles to recall times quite so tough: "The level of repression is currently extremely high, we have not seen the like of this. Right now we're really experiencing a societal disaster." 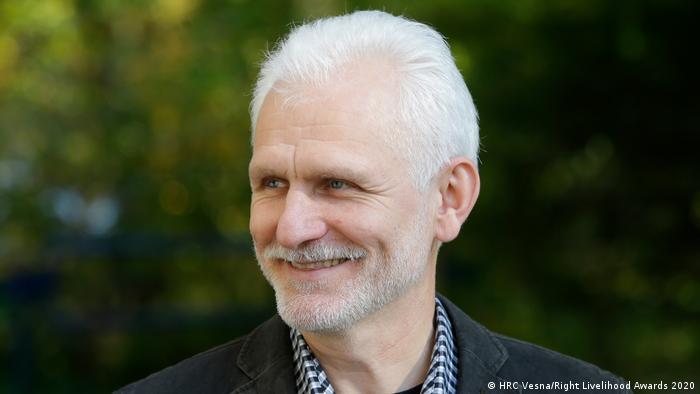 Bialiatski also calls for the abolition of the death penalty, a punishment eradicated in all of Europe apart from Belarus as it stands

He organized public protests against Stalinism and in memory of the victims of political repression, which resulted in jail time and fines before very long. He was just getting started, however, having now been sent to jail 25 times in total, including a stretch of almost three years.

In 1996, he co-founded the Viasna human rights center, which he chairs to this day. Initially conceived merely as a way to help imprisoned protesters and their families, Viasna is now the country's leading NGO. It documents human rights abuses in detail, independently monitors elections and stands up for freedom of assembly. The costs are immense: Staff are repeatedly arrested, fined or beaten up.

Read more: The 2019 winners of the 'Alternative Nobel Prize'

Behavioral scientists say we become more shrill versions of ourselves in a crisis. In Lottie Cunningham Wren's case, that has meant redoubling her already considerable efforts for Nicaragua's indigenous peoples during the coronavirus pandemic.

Shecanvassed indigenous peoples on the Atlantic coast of the central American country in the middle of the crisis. She saw people dying from COVID-19 and observed the locals' desperate attempts to treat the virus with alternative medicines because they have no conventional ones.

"The people believe that it's just a fever or the flu, they don't think of it as a virus. And the nurses do not even have paracetamol, it's sad. They all feel let down by the local authorities and the government," she said this year. A little more than 3% of the population of Nicaragua are indigenous peoples, called Miskito, Sumo and Rama. 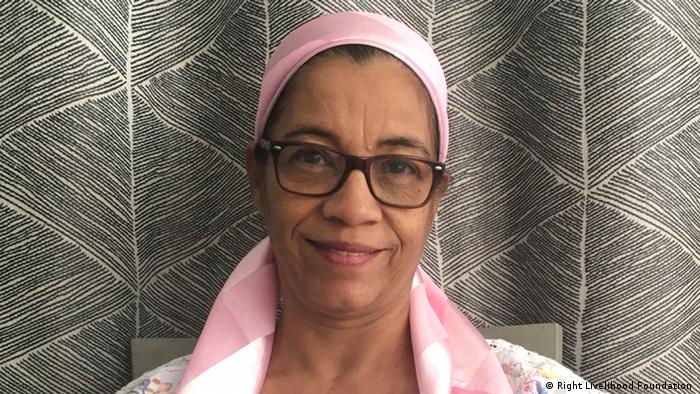 Initially a nurse, Lottie Cunningham Wren trained to become a lawyer to better help indigenous communities as an advocate

The 61-year-old lawyer Cunningham Wren is the president of the Center for Justice and Human Rights on the Atlantic Coast of Nicaragua (CEJUDHCAN), hails from the Miskito community herself and is a passionate advocate for indigenous peoples and Afro-Nicaraguans, particularly when it concerns land rights and resources.

But her success has since crossed borders, with indigenous peoples around the world seeking her help when it comes to defending land titles or ecological or cultural rights. In 2001, she succeeded in securing land rights for indigenous peoples in Nicaragua at the Inter-American Court of Human Rights, forcing the government to demarcate and certify indigenous areas — a valuable precedent. It prevented the state's previous efforts to plunder natural resources in these areas without the locals' permission.

She also stands up for the rights of indigenous women, setting up programs to counter domestic abuse and helping tell young people how to expose infringements on their rights.

And her efforts are a thorn in the side of many. She endures almost daily threats and intimidation, and narrowly escaped an attempted kidnapping in 2015.

Bryan Stevenson was just 16 when he witnessed an awful crime: the murder of his grandfather, who was stabbed during a robbery at his Philadelphia home. But perhaps it was the way he handled the event at such a young age that showed what sets him apart.

The killers received life sentences for murder. As the bereaved, Stevenson had an opportunity to call for them to receive the death penalty; he did not take it.

"Because my grandfather was older, his murder seemed particularly cruel," Stevenson said later. "But I came from a world where we valued redemption over revenge."

Stevenson grew up in the small town of Milton in Delaware. As a child, his rights were not the same as the white kids'. He had to enter the dentist's office via the back door. He queued for hours to get a polio vaccine, watching white patients get treated right away. White and Black children did attend the same schools but were separated when playing at recess. 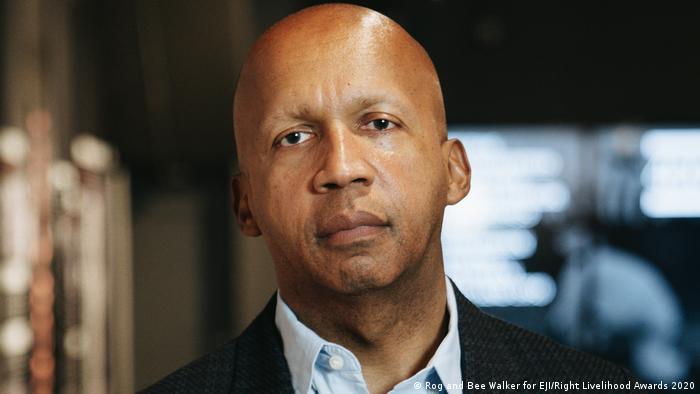 Bryan Stevenson also fights for minors convicted as adults, and for people with mental illnesses in detention

He now uses every free moment to attend the Prospect African Methodist Episcopal church, praying, sitting at the piano or singing in the choir. Perhaps the biggest lesson he learns there is how one must get back up after any fall — people doing so in the church receive standing ovations in support. Stevenson's faith has surely guided one of his credos, that "each one of us is more than the worst thing we've ever done."

Fighting for justice and against systemic racism has become one of his life's works — he's now one of the leading civil rights lawyers in the US. His goals: equal rights for all and a reform of the US criminal justice system, which is far more likely to sentence Black people to death than white people. While African Americans make up around 13% of the US population, 1 in 3 inmates on death row are Black.

Stevenson converted an organization in 1989 that is now called the Equal Justice Initiative (EJI.) It works for people on death row and has already secured either a release, a milder sentence or a revised verdict for 140 people who had been wrongly sentenced to death. The EJI funded the construction of a large memorial right in the heart of the Deep South, in Montgomery, Alabama, dedicated to the memory of enslaved Black people.

Last year a film was published about the 60-year-old lawyer. For its title, the flick borrowed Stevenson's own memoir's fitting name: Just Mercy.

Ales Bialiatski, Lottie Cunningham Wren and Bryan Stevenson will all be celebrated for their achievements this Thursday; they'll give a host of press interviews and perhaps raise a glass in celebration come the evening. But the fourth prize winner, arguably the bravest of them all, might very well not even hear that she's won the Right Livelihood Award.

Nasrin Sotoudeh is a political prisoner in the notorious Evin Prison in Tehran. After two months on hunger strike, she was recently reported to weigh just 47 kilos (103 pounds). 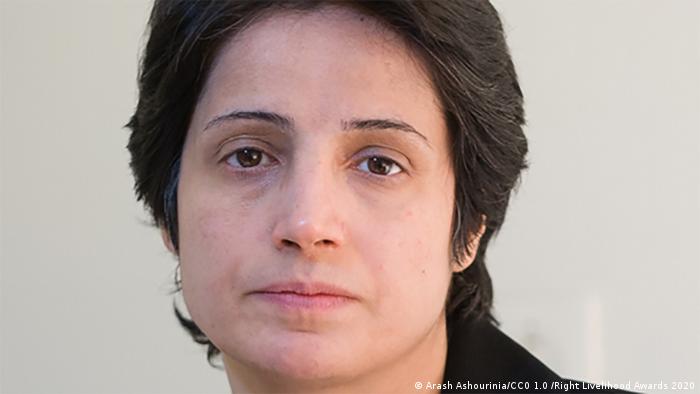 'The voice of human rights in Iran' was briefly moved to intensive care owing to her poor health, but is now back in a jail cell

Sotoudeh's story is a case study of the dangers of standing up for human rights in Iran. Despite passing her exams in 1995, she had to wait eight more years to receive permission to operate as a human rights lawyer — she had come into the regime's crosshairs for her work at pro-reform newspapers. In 2006 she joined Iran's women's movement for the "1 Million Signatures" campaign to change discriminatory laws.

Three years later, Nobel laureate Shirin Ebadi sought out Sotoudeh for representation after her assets had been seized following the 2009 elections. The lawyer also represented a host of less prominent clients facing detention or prosecution after the quashed "Green Revolution," which followed the contested polls.

Sotoudeh has represented journalists and minors facing death sentences. In 2012 she was awarded the Sakharov Prize for Freedom of Thought, by the European Parliament, which honors individuals and groups of people who have dedicated their lives to the defense of human rights and freedom of thought. In 2018, Sotoudeh represented the three so-called "Girls of Revolution Street" who were protesting rules on wearing the hijab and uncovered their heads in public. It's a David and Goliath fight against a repressive regime for which the rights advocate and mother of two has risked everything.

Sotoudeh was arrested for the first time in September 2010, was put in solitary confinement and could not see her husband or children. She repeatedly went on hunger strike in protest at the conditions. By 2013, thanks in part to international pressure, she was released — only to land back in prison five years later, having been accused of acting "against national security." The draconian verdict was 38 years in jail and 148 lashes. The regime released 85,000 prisoners in response to the COVID-19 pandemic, but not Sotoudeh.

Judging by her husband Reza Kahndan's accounts, the Alternative Nobel winner's health and safety should currently be cause for global concern: "Her actions have influenced the people in the country, and the system is trying to repress that. But now she is very weak, much weaker than you can imagine. This time her situation's grave."

Adapted from the original German by Mark Hallam.