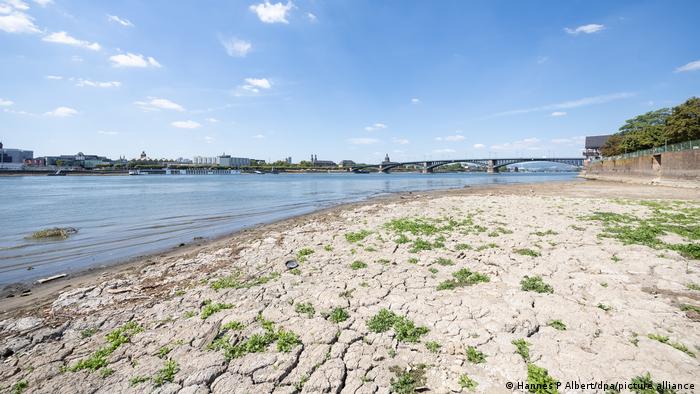 Water levels on the Rhine River are well below usual, impacting freight and ferries on the giant freshwater artery

Water levels on the River Rhine in Germany continue to sink, forcing companies to seek alternatives for the freight they send up and down the enormous waterway.

At one notorious shallow point at Kaub, between Mainz and Koblenz, the water level had dipped to 32 centimeters (12.5 inches) by late morning; 5 centimeters lower than the same time the previous day. The water level doesn't indicate the literal depth, but rather how far above an extremely shallow benchmark it is at any given time.

The low water levels on the key shipping artery for Germany's main industrial areas have already affected freight, even though it is ultimately up to shipping companies to decide which vessels, under what loads, can still navigate the waters.

"Ships are still running, but fewer of them and with lighter loads," the spokesman of the German Waterways and Shipping Office (WSA), Florian Krekel, told Reuters news agency. "Traffic has not yet come to a complete standstill."

In the area around Cologne, river levels are approaching the recent record lows seen during the last comparable dry spell in 2018.

The river is an important tributary for the transport of raw materials including grain, chemicals, minerals, coal and oil products. Two coal power plants have already been affected, unable to run at maximum because barges cannot bring in full loads.

"It's having huge impacts on the Rhine waterway," Christian Lorenz, spokesman for a company coordinating harbors and goods transport businesses in Cologne, told Reuters, giving the specific example of ships transporting rock salt from nearby Heilbronn.

"At the beginning of March, the ships could be loaded with roughly 2,200 [metric] tons," Lorenz said. "Because of the lower water levels, only around 600 tons was possible of late."

Lorenz said the low-point was a practical capacity of just 300 tons in 2018, and "we're approaching that once again."

The phenomenon facing the Rhine is common across much of Europe and the Northern Hemisphere at present, after an unusually hot and dry summer that has caused water shortages and wildfires from Hawaii to Hungary. 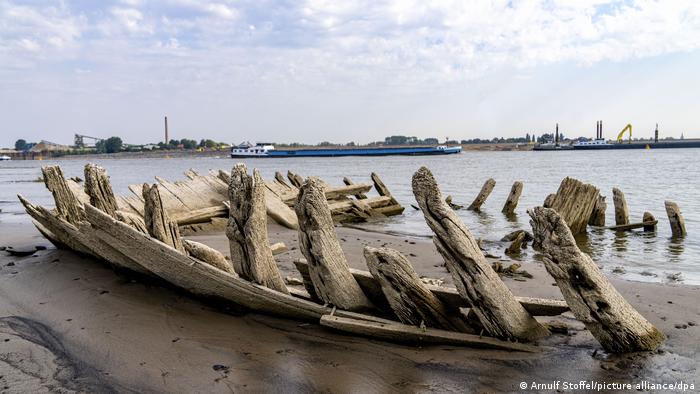 In the small town of Nierstein, south of Mainz and north of Mannheim, a car and passenger ferry service across the river shut down entirely late on Sunday and later said that it would not be able to restart operations on Monday as it had hoped.

"We are running over the gravel with the ferry and running the risk of breaking the drivetrain," operator Cornelia Dries said on Sunday.

The company warned drivers that they would have to budget for a detour of 20 kilometers (12.4 miles) or more to reach a bridge en route to their destination. "Cars are just too heavy at the moment," Dries said.

After a hot and dry summer, this week's weather forecast for Germany appeared to offer some relief.

Reduced temperatures and rainfall is forecast most days this week, with the first drops falling in western Germany (home to the Rhine) on Monday.

"The signs have been solidifying in recent days and are now doing so more and more — there will be rain in the week beginning today, which will be a cause for great joy in some regions," Martin Jonas of the German Weather Service (DWD) said on Monday.

However, based on current forecasts, prolonged rain and a meaningful drop in temperatures can only really be expected by Wednesday, after another warm and dry Tuesday. In the east of the country, the precipitation might take another day or so to arrive as it rolls across the continent.

While you're here: Every Tuesday, DW editors round up what is happening in German politics and society. You can sign up here  for the weekly email newsletter Berlin Briefing.

Rivers across Europe are too dry, too low and too warm

Shipping on Rhine has slowed to a trickle: DW's Ashutosh Pandey